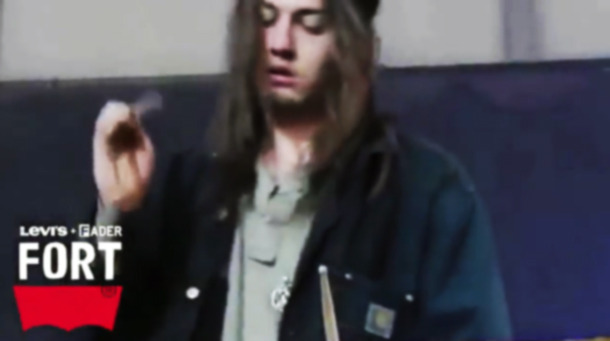 In the case that you, like us, only stumble on Hipster Runoff posts when you google your favorite current meme, only to discover that someone has not only copy and pasted it but encapsulated its snark into bite-sized paragraphs, then maybe you haven't seen how truly awful Salem is.

Or maybe you've read both his piece (Salem is “really boring”) and Fader's initial clarity (Salem is “not good”), as well as Fader eating its own words days later in an act as foggy as Salem's vocals are apparently supposed to be. Don't forget that Fader released a 7-inch of their music as they argued that the only failure was their own: a sound stage that was too crisp, vocals that were too audible, everything just a bit too revealing for Salem's dark arts:

“It's like if we’d put Nas up there with a paper bag and an accordion.” Right. And, saying that “a few people howled” at Salem's inability to hit drum pads in time “is probably more accurate than 'booed offstage'.”

The funny part about this embarrassing episode is that it ran at about the same time that a very polite argument about “chillwave” (I will never not put that in quotes) proceeded between Jon Pareles at the New York Times and Brandon Soderberg, batting for the Voice. That argument pits two familiar schools. Pareles sees the genre as “annoyingly noncommittal,” and, “a hedged, hipster imitation of the pop they’re not brash enough
to make,” or, Pareles thinks Washed Out is a poser.

Soderberg argues Toro y Moi and Memory Tapes' ilk gather “the still too-loaded sounds and emotions of the '80s and
confronts a contemporary audience (generation, maybe?) with them, raw
and uncooked,” and are thereby our latest punkish innovators.

Hipster Runoff was already there for that punt too, which he returned as typical old man rock and roll (Pareles) versus scrappy new
punk kids (Soderberg) paradigm.

Obviously, my favorite Hipster Runoff hypothetical went, “Should Salem convert to the chillwave movement instead of staying goth wave?” You have to wonder what any of these fluffy, lumbering, loop-heavy bands would sound like if they were treated with the brutally honest conditions at Fader Fort, and whether that would rewrite the question, which is really about the importance of a musician's ability to hit a drum pad in time in the face of his supposedly fresh ideas. Because Salem was struggling.

Is this the first claim for a generational genre-movement that needs to be buried in its own mush in order to be presentable? Shoe-gaze was never this pussy-footed. But who cares. If you missed it: