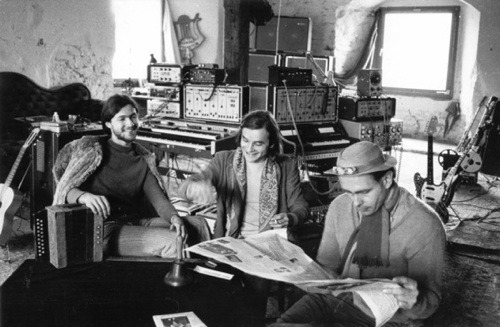 Harmonia have reformed following interest generated by the release of their 1974 live performance on Gronland Records to play a series of dates in Europe and the U.S. They'll be at the upcoming ATP/My Bloody Valentine curated All Tomorrow's Parties festival in upstate New York on 9/20 (a reunited band co-curating the festival where a reunited band is asked to play- curious), followed by a gig at Manhattan's Le Poisson Rouge on 9/22.

Harmonia was formed in 1973 by Michael Rother of Neu!, Hans-Joachim Roedelius, and Dieter Moebius of Cluster. They released their first record, Music Von Harmonia, in 1974. Their second album, DeLuxe, followed in 1975. A hodge-podge recording of material from a meeting with Brian Eno in 1976 was packaged under the title Tracks and Traces and released 20 years later in 1997, the only new material to round out their released body of work until October of last year, when Live 1974 was released.

Everyone mentions that professional enigma Brian Eno once declared Harmonia and the Krautrock scene of the 1970s the locus of some of the most important work being done in contemporary music, and that influence is nowhere more clearly exhibited than in Eno's own music. I'm not certain if the timing of this works out, but even on a perfunctory listening to the DeLuxe track “Kekse,” it is possible to hear where Eno may have mined a vein of influence from that song's piping organ patches and riffs possibly later put to use on Eno's 1974 Taking Tiger Mountain (by Strategy) track “Put a Straw Under Baby.”

In his Quietus podcast interview, Harmonia and Neu! guitarist Michael Rother describes the drive of the sound of both his solo music and that of Harmonia as one of endless forward motion, with its motorik rhythmic style. The impression created is one of total continuity, a style that seems to eschew the pop arc of attack, decay, sustain, release Bob Moog helped our knob-twisting fingers effortlessly relate to in another context. The repetition of ambience and rhythm that is the backbone of Harmonia's compositions means that the middle of the song is just as exciting and entrancing as the beginning or the end.

As Slavoj Žižek makes the point, repetition is the path to the new. The repetition he refers to is the historical concept of rescuing political ideas from their historical contexts, but think of it in terms of songs: in the endless, stripped essence of Harmonia's songs there is infinite potential that their forward-pointed songs lead to the mind-blowing new thing we are searching for.

As Henry Miller wrote, standing still in such meditative and constant motion, like a hummingbird, “…the door may suddenly open of itself. The door to reality, I mean. Was it ever locked?”