Listen: CocoRosie, “God Has A Voice, And She Speaks Through Me” 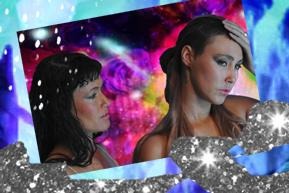 This is a tender club banger for progressive hair salons and college campuses across our great nation. And for people who haven't had enough auto-tune in their lives in the past half decade. Simultaneously at its most Bjorkian-twinkly and most beat-driven then ever before, this is also CocoRosie's anthem for art world travelers: you could hear ringing through the air at a place like Art Basel in Miami, which was one stop for Bianca Leilani Casady (aka “Coco”) in a stream of art shows for the elder sister this year, though mostly the sisters keep to Europe, a continent where this single probably feels even more at home, perhaps as home as it would, say, reinforcing the virtues of a perfume.