Live at the Apple Store with Themselves, Yoni Wolf, Dose One, Rainbow Arabia 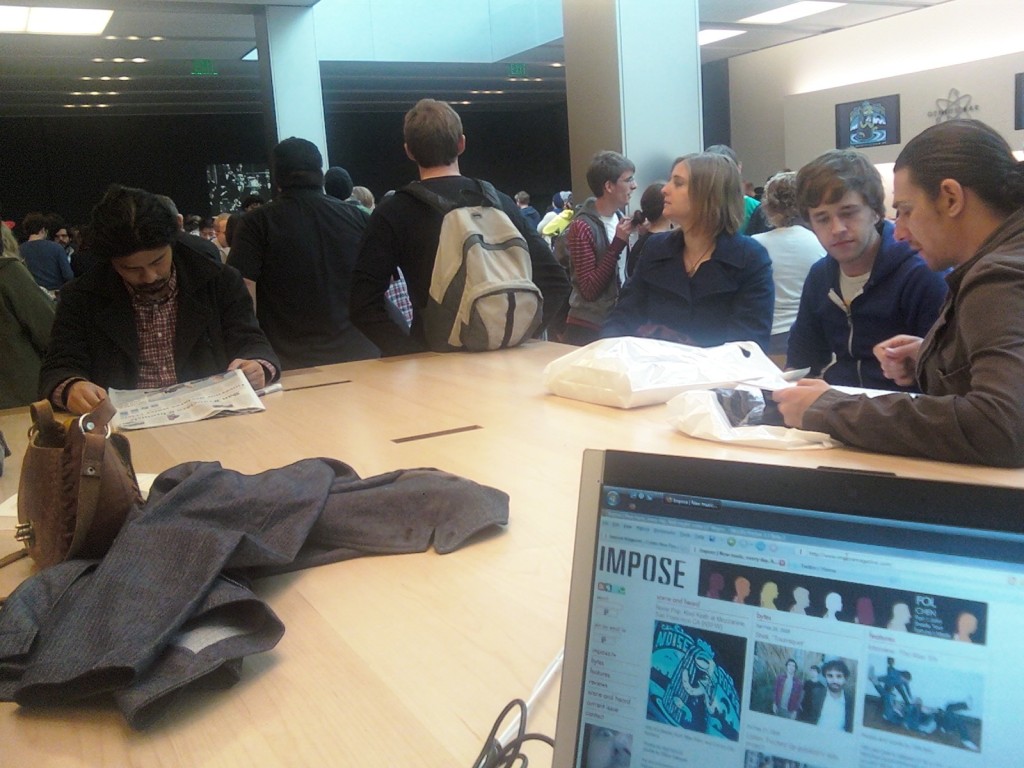 Now for a little journal-keeping.

3:00pm: Approved Theft: Apple store network. I'm posted up across from the Genius Bar, wishing it had the same Fernet special as the Happy Hour spot. Enjoying the playful pop melodies and crunch of digital drums as Boy In Static opens. I can't see them, but it was pleasant. They closed with a song about San Francisco. Photos to come…

3:20pm: I've set off the Apple Network alarm system twice. You can't see him, but security is under the table, unhappy with me.

3:27pm: I can see Dose One on the other side of the store. He's being accosted by old hipsters. Yoni Wolf is up next. If anyone is out there, feel free to comment.

4:00pm: Yoni Wolf of Why? played a solo set on an antique keyboard. I wish I could be more specific.

His set was an entertaining change, full of freaked out balladry. I am continually impressed with Yoni's ability to talk about paint thinner in a love song. Or perhaps its never a love song, but an abstract ode to housing appliances?

4:11pm: I just accosted Dose One because hypo-criticism is the new electro-criticism, or something. It was a flagrant proposition, but if it pans out, well, my humility could be saved.

p.s. I've nick-named the DJ. He is “DJ Dial-It-In.” Vivian Girls followed by Animal Collective, followed by Wavves, followed by a mash-up with the synths from “Bette Davis Eyes,” yay.

5:10pm: Rainbow Arabia has been my favorite newly discovered band of this festival. The girl has a little but punkish voice, similar to Bonde Do Role. The sound draws heavily from world music, Arabian naturally, Caribbean and Brazilian punk.

Be on the look out for Rainbow Arabia…

6:06pm: Themselves show is complete. Too exhausted to elaborate. Perhaps a dissertation on the importance in Themselves re-uniting is in order for Monday. Off to Happy Hour to recharge with Fernet and PBR.

PrevPreviousGetting to know you!
NextThe Republican Rapper (no, not LL Cool J)Next