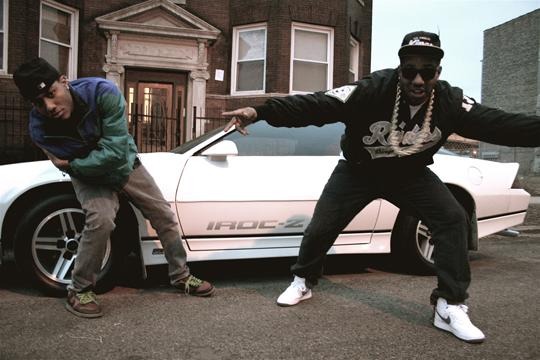 I've heard plenty of grumbling, but this is the first public track I've heard aimed squarely at those who have been branded with the term “hipster hop”.

This is Mazzi of S.O.U.L. Purpose going off on Jay Electronica and the Cool Kids, but mainly on the Cool Kids (“tight ass jeans, probably even tighter thongs”), since he promises another track aimed exclusively at them. While “Lesson A” is pretty funny, the only really new aspect to this knee jerk annoyance non-diss diss track is that these current artists (who aren't mimicking the past “the correct way”) have been dubbed hipster hop by the wider hip hop community. It's not sell-outs to the mainstream, it's sell-outs to gimmicky skater kid hipster trends that are getting flack. Tight jeans and an 80s fetish: there's a lot of style trashing (over substance trashing) going on, though Mazzi does hate plenty on their skills (“Mikey stop rapping and finish your cereal”).

Of course, like all diss tracks, this “public service announcement” is aimed at an increasingly public trend. It's because Cool Kid's hybrid 80s tastes have caught on so quickly that long-time adherents to the underground can get feisty, and also why people will notice. Exhibit A: other than when I catch my own reflection, I don't see too many white boy hipsters in my part of Bushwick, but I do see plenty of hip hop kids dressed up like the Cool Kids.

Mazzi expanded on his hip hop service announcement to missinfo.tv:

“Basically, the commercial scene is set up for pop gimmicky culture…while the so called “underground” is the breeding area for raw creativity…NOT GIMMICKS!!!

“Jay Electronica (Hipster Hop hero)needs to chill & harness his shit before steppin’ up w/ a “holy-er than thou” attitude… Killah Priest & MF Doom did all that already… Dude ain’t reinventing the wheel…& “different” doesn’t always mean better… He ain’t no alien…LOL!

“The Cool Kids (Hipster Hop heroes aswell)?! Where do I begin?! Aside from their 1/2 ass rhymes, & “I’m trying too hard” subject matter, it’s quite obvious that they have GIMMICK written all over them! They took a golden cherished era, put it through a ringer, warped it, twisted it, & call it their own?! They had the nerve to say they were original! Ninja PLEASE! They not even flippin’ it right! They woulda’ been herbs back in the day (as they are now)! First Chuck Inglish is from Chicago…then Detroit… Which one is it bro??? Those tite jeans on that other dude gotta go too!

“Look, it’s expected of Hurricane Chris or some one of that genre to be on that gimmick shit but not what we dub real/underground/true school Hip Hop… Let that be! No tools! No posers! No herbs! No space alien rappers who really ain’t on it like that! No little kids tryna’ live out an era they are only partly up on!

Shout out to Fresh Daily & his crew… They’re from NY & they have been able to capture that vintage Hip Hop era the correct way!”

PrevPreviousListen: Busy P, “To Protect & Entertain” feat. Murs
NextWhat we'll do when MBV is in townNext