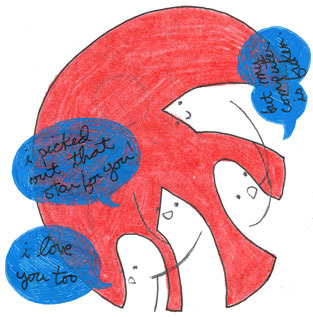 Do you like comics? Sure you do. Do you like strange minimalist comics with an uncanny accuracy for capturing the modest epiphanies of your everyday life? With an inspired and unique eye for color and typography and design? Hot Dog! Even better! Well lookit this:

Dina Kelberman was there at the start of Wham City, when she and fellow SUNY Purchase students Dan Deacon and Connor Kizer devised the phrase as the worst possible choice in a contest to name a new dorm. (The actual winning name, however, was in fact much worse. “Outback”. Yeah.) Since the great Baltimore Migration of 2004, which marked the beginning of Wham City the home, and soon the art collective, Dina has been involved in nearly everything they've put together, adapting dinosaur movies for stage, coordinating Whartscapes, sewing strange and impressive costumes, drawing/painting/making all sorts of other things. But unless you're in Baltimore*, where her comics currently appear weekly in City Paper, or in Brooklyn with a very good eye for neat small press items at the Cake Shop or Desert Island, or just independently check her website, her own illustration and comics may be less visible.

Fortunately, now you can just jump straight into all the highlights with Dina's first printed Important Comics collection, packed with visual insight into your life via markers, pens, pencils, and paint on receipts, movie tickets, and bits of paper. It even has an index.

*Or if you are in Baltimore getcherself down to Zodiac (1726 N Charles St.) on June 5th for the release party / sketch comedy show.

Here is a brief interview with Dina Kelberman, accompanied by a picture of her holding a sword and bundle of feathers:

How did Important Comics begin?

I just randomly decided to draw this little ridiculous comic as a flyer for an art show I was in in college, it was the first time I'd ever even thought about drawing a comic. I just got really into it from there, not really knowing what I was doing at all. I was never into comics as a kid or anything, I was obsessed with cartoons, I wanted to be an animator.

I mostly felt like I didn't like anything I saw in comics at stores and stuff and wanted to do something different from all the Daniel Clowes type stuff I was seeing. The only comic artist I actually liked at all at first was Chris Ware. Although, of course, I didn't actually know anything about comics then, now I've gotten into a lot more stuff and sort of stopped being such a total snob.

Are the recurring shapes besides you other real people?

Well, definitely a lot of stuff is based on conversations or hypothetical situations with my friends, but I don't think of the “characters” as having continuous personalities that span all of the comics, so I can't really say that any one character is anyone in particular all the time.

It never actually even occurred to me that people would think of the characters as actual recurring “characters” at all until my roommate one day was like, “That triangle guy is always such a jerk!” I then realized that it was probably really weird of me to assume that everyone knew I just considered them all to be generic “anybodies” all the time.

How much is premeditated and how much just happens?

It's definitely all very intuitive, I don't plan anything out ever. The whole process is pretty much stream-of-consciousness. Every once in a while I'll have an idea for a whole comic at once, but usually I just draw a framework and fill it in till it's full. Which I like cause that's how real life is.

How has writing the comic for City Paper changed how you work?

The Citypaper comics thing is weird and totally different than how I usually work. I definitely feel way more self-conscious when I'm working on that stuff, partly cause it's a “job”, and partly cause I know way more people will see it, and partly cause I'm pretty sure most people that get the City Paper hate my comic. At least, that's what I've gleaned from the angry letters demanding that my comic be removed.

But other than that it's also weird because I've established a very strict sort of framework for the format and how those comics look, so it's weird to have that same skeleton to flesh out every week instead of the usual process of making up whatever garbage just springs to mind. Also the fact that it's black and white is hard for me cause I'm obsessed with color and that's a lot of what motivates me to do comics and art in the first place.

So, in summary, it's pretty much the exact opposite of my normal process.