And the SXSW recaps keep coming… 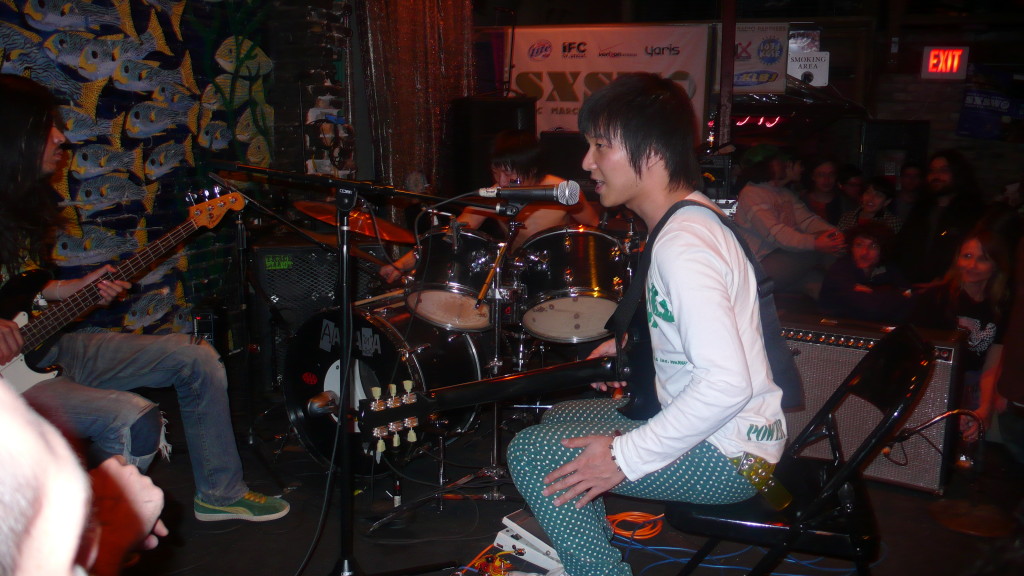 For those in withdrawal or ongoing SXSW envy, Tascha van Auken gives us some of her South by Southwest moments.

Curious about their on-stage peeing/spitting/playing guitar with penises, I went to check if Black Lips are doing Vice right. I even forced myself to the front of the stage in The Flamingo Cantina for this one. As Jared, Cole, Ian and Joe (all in their early twenties) got on stage, the only thing I noticed was how gross each of them were; good-looking but gross. They have that “I don’t have a lot of rules about how I treat my body” thing about them. Similarly, there’s something totally messy and raw about the way they perform, but musically they are tight and engaging. There was definitely some spitting and beer spraying but mostly they kept it adult . It wasn’t until the end when they brought their bass player friend to rock out with them that I was truly won over. “Friend from home” played the final song with them, but not before landing Jared with a huge, sloppy, wet tongue kiss that lasted a few seconds longer than everyone expected. Then Ian hopped up to the front of the stage, wailed on his guitar and jammed his tongue down “friend’s” throat. It was very gay; in a fun, dirty straight way. It was also, well, kinda hot. The bad boy Black Lips are officially the perfect Vice band.

The next night, after catching Yip Yip, a bizarre industrial-electro costume party, I stayed for Montonix. They are from Tel Aviv and they are crazy. I knew this right away when Ami Shalev, the lead singer, jumped on stage shouting “shut up!” Then he called everyone an asshole and then the band started playing. Ami ran around the club like a drunk, insane four-year-old crashing his own birthday party. He jumped on to the bar and into the bar sink, he sprayed himself with Coca Cola, he covered his face and hair in shaving cream and wet kissed some girl at the side of the stage who was totally digging him. He fell to the floor at the audience’s feet and stole someone’s drink and tossed it over his head. He threw stacks of water cups everywhere and kicked over a trash can. The bartenders were terrified by him. I was too, but along with everyone else in the club, I was also laughing and marveling at the fact that I kind of liked it. Again, what made the nonsense work was the fact that the music was good. It was loud and intense and really fun to go nuts to. Monotonix = so so so so stupid and great. Monotonix + beer = amazing. P.S. Ran Shimony plays drums standing and set his cymbals on fire at the opening of the show.

I saw Mika Miko the last night of Awesome Austiness at Emo’s Annex. They have spent years now playing in LA and are for sure worthy of any raucous dance party that city might kick up. The minute the five Kill Rock Star girls wandered casually onstage to sound check they stirred the crowd's interest with a sort of high-school cool. The band had a healthy following of younger people, who pushed furiously to the front to thrash around. One girl sang into a telephone receiver and another, turned away from the audience, sang into a regular microphone. Their inter-song banter was full of quiet “thank you’s” and “we’re Mika Miko”, a genuine shyness, despite their technical confidence as a veteran touring band. There was nothing staged or insane about Mika Miko, but the natural energy and stage presence of these kids made them one of my favorite shows of the week.

I witnessed the intensely seasoned showmanship of Atlanta band The Woggles, who got the whole audience involved in their Animal House toga party choreography. I was crunched against a pole by the dancing fans of Holy Fuck at the Beauty Bar, where no one would give me cigarettes. I was totally taken off guard and impressed by dorky but cool metal-ish band, The Panthers. I was hypnotized/moved by Denmark experimental act Under Byen’s overpowering live show at Emo’s. I chilled on a plastic chair in Homeslice Pizza’s backyard to see one of my favorites, The Teeth swoon and play their genuinely kooky (and occassionally dark) rock. Shout Out Out Out Out played a fun set at The Speakeasy. I waited FOREVER for the sound check to end so that I could finally catch and love The Octopus Project at my new favorite nighttime venue, Elysium. I was totally mesmerized by the drummer’s style and in love with this new wave of electronic music from Team Love Paris/Omaha band, The Berg Sans Nipple. I balanced my ass on a wobbly wooden ledge so I could see the top of the drummers head from Tokyo neo-prog band, Green Milk From the Planet Orange. There was also the undeniable spattering of bands who were eh-to-bad, but there’s no need to dwell.

For a few days in March, the kids were in charge of the Austin kitchen and nobody was killed, no wars were declared, no bombs were dropped, free energy drinks, alcoholic drinks, BBQ and condoms were all over the damn place and music was had by all.