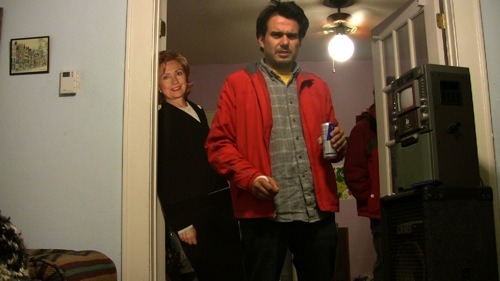 [Above: Gordon Downs and Hillary.]

It started with a fat bald man with the Hummer of digital cameras hanging from his neck, screaming at his cellphone: “The Beastie Boys are in town. THE BEASTIE BOYS.”

It ended with me taking a huge dump in some nice strangers house. The middle part of my first day fit snugly between these two steaming pillars of crap, at this festival that those who wear laminated piece of plastic around their neck refer to as “South By”.

I don't want to sound like a curmudgeon; I'm far too young to be one. I have been to about five South By Southwests, which is more than some, far less than many. With the data of that many years piled into my brain, I've gotten less excited about the industry slop fest to end all industry slop fests. I had my first, ecstatic season where I greeted incredulously the free day parties and the waltz-in-and-out nature of the showcases. I had a few years of foregoing the wrist band for day parties alone, a period in which I felt I'd accomplished something by hitting up a majority of the free booze 'n bbq sites and vomiting in at least one of them by week's end. This year, I will be happy if I still have feet come Sunday morning.

Though the majority of my Wednesday was spent standing in the three and a half mile long line to get a white plastic strip to strap on my wrist, the wait was worth it, because now I can stop by for Sparks and SoCo refills at Fader's party through the daylight hours for the rest of the week and no one can stop me. Except perhaps the neon yellow jeans in the Levi store (blinding!) that marks the entrance to The Fort, the Fader's massive hang out space that also includes a store for Ray Bans and four different rooms for people to take pictures and shoot videos of bands. Lou Reed's going to be there?

Anyway, after a Sparks and a voyage into the numbing comfort of the internet, it was mainly a day spent under the dry Texas sun at Ms. Bea's, the crappy, cheap east Austin bar with a backyard where Todd Patrick sets up shows every year that are aimed firmly at pleasing my personal music tastes, second perhaps only to Impose photographer/writer Nate Dorr's musical tastes. There I caught, in perhaps some sort of detuned order, Neptune, The So-So Glos, Vivian Girls, Ponytail, The Mae Shi,The Pharmacy, Golden Error. I can confidently say that at least three of these bands will be buzzed about in the next three days, and that's great for them because they all make fantastic, refreshing music. Ponytail and Vivian Girls are two of my favorite freshman bands (though Ponytail has been around a bit longer, perhaps they're sophomores), but I will leave it to Nate Dorr to mention their sets, as it is 4am and I feel an inexplicable resentment towards all four of you reading this.

I had the chance to talk with Neptune and Vivian Girls. Neptunes have been around in one form or another since 1994, but have you seen their set? They play homemade sculptural metal-work guitars, one of which looks like it could be wielded by Gimli as a battle axe. They also have their own home-designed oscillators and a few rigged pedals. My conversation with them was perhaps the most awkward conversation of my life. This was made worse by my guilt for not knowing about a weird band that has been around as long as Reality Bites. Perhaps the most telling bit of info I gleamed from our short conversation was the fact that the band actually formed after one of its members designed those strange, monstrous guitars and as such has always been concept based as opposed to ego-driven.

[Above: Neptune, image by Nate Dorr].

After that, I hung out in the grass near Ms. Bea's with some other Impose folks, Vivian Girls, and some of their friends. Among other important facts, it was divulged that:

– Vivian Girls have 45 limited edition test copies of their first 7″. I bought one. That makes 44.

– They are playing eight shows in the next four days.

– Their drummer is into Dungeons and Dragons.

– Their bassist is getting a masters and is a Teaching Assistant for a college level Physics course.

– They are not all from New Brunswick, just the bassist.

-They were bummed about their set and thought it wasn't up to par. For the record, it just sounded less reverbed and more pared-down punk to my ears, and it was great.

[Above: dd/mm/yyyy, aka Day Month Year.]

Later that night, after watching a few hours of that TV show about Hugh Hefner's “girlfriends” back at the house where I'm crashing, I ventured to the University area, where after three convenience stores rejected my out of state ID and one accused me of trying to shop lift, I managed to acquire a Sparks and a bit of bearing, enough at least to find the acoustic sets–yet again put on by Todd Patrick–going down in the middle of University of Texas. My favorite was definitely dd/mm/yyyy (Day Month Year), which involved two saxophones, a floor tom, and three acoustic guitarists wandering through the audience riffing on a few chromatically inclined melodies.

After that, a raccoon watched me piss in a ravine and I drank a few red bulls and got to that aforementioned crap in these strangers' bathroom. Good morning.