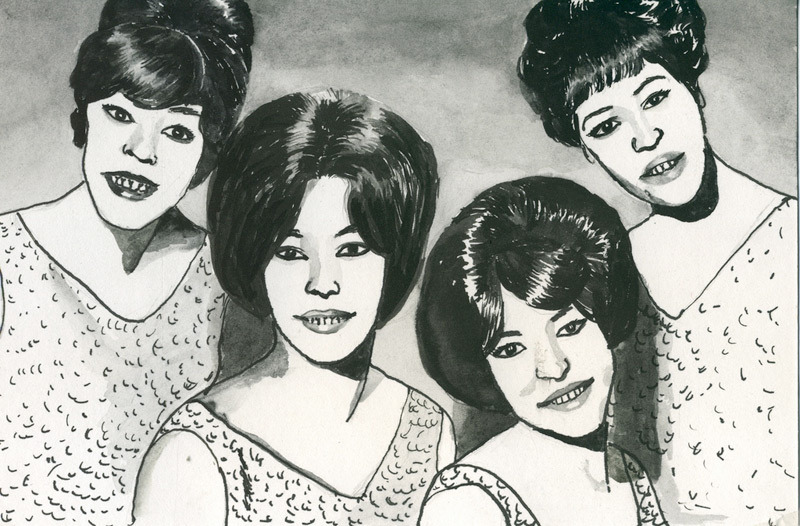 Frontman of the all girl surf rock group, La Luz, Shana Cleveland is also a visual artist and poet whose works have appeared on VICE, Yeti, The Believer, Black Clock and the Columbia Poetry Review. Cleveland spends a lot of time on the road playing shows but she also makes show posters and portraits with a lot of famous faces from the doo wop and motown era. La Luz is based in Seattle and has released its first full-length, It's Alive.

What are you most stoked about It's Alive?

It's our first real record so it'll be nice to be able to tell people we have something besides tape EPs! I don't know what I'm most excited about, it's all tremendously exciting. We've only had a few songs released up until this point, but we play a lot more songs live, so it's cool that fans will be able to become familiar with more of our work.

You studied poetry. Was it a switch from art? If yes, why? What do you think you learned you otherwise would not have?

I've always messed around with lots of different methods of making art, but the thing that I've seemed to stick with in visual art has been portraits. I've been doing the portraits for over 10 years now, it's just an excuse to stare at people's faces for a long time. Which, when I do that in normal life it either creeps people out or makes them think I'm in love with them. Poetry wasn't really a switch from visual art for me, it was just something I did a lot of for a time, but I don't write many poems now-a-days, just song lyrics. I think the main thing that studying poetry taught me is that simpler is often better. If you try and sound smart you'll usually only impress idiots. My favorite writers (poets, lyricists, novelists, etc) are the ones who use simple language in interesting ways.

Some people complain that a lot of contemporary poetry is too much wit and less gravity. Do you agree?

I don't read enough contemporary poetry to know what's going on there. But I do tend to like kind of goofy poets like Russell Edson and James Tate, I probably tend to prefer comedy to gravity in most situations.

Do you write all the lyrics?

Is writing lyrics harder for you than making drawings?

I work harder on lyrics. The drawings are much easier yeah, I can listen to records while I work, sing along, get stoned, eat cereal, gossip on the phone.

La Luz means “The Light” in Spanish, right? Who came up with the name?

Can you tell us a little about Hanging Tuff?

Hangin Tuff is a pilot TV show which is inspired by old variety music shows. It's all masterminded by this cool lady named Bobbi Rich, who just wrote us one day and said she wanted us to be on her show and then took us and a film crew on a bunch of Halloween themed adventures, it was really fun. Here's a teaser.

What's your new record about for you?

Mostly love and death. About a year and a half ago, when I had just started working out the first La Luz songs, there was a mass shooting at my favorite cafe and some friends of mine were murdered. I've been thinking a lot about life and death this year, what I wanted my life to be about, what I learned from the beautiful people who died that day. Death comes up a lot in the album because I was feeling pretty haunted. I feel like anything there is to say about those types of heavy times ends up falling flat or sounding silly or cliche, but I came out of all that just wanting to show people that I love them and have as much fun as I can while I'm around. I'm usually pretty good at the having-lots-of-fun part, but sometimes fall short of the showing-people-I-love-them thing because I'm shy.

How long have you been drawing? Favorite style?

I don't remember not drawing. For comics, which is sorta how I see my drawings, I like the Hernandez brothers, Daniel Clowes, Charles Burns, Julie Doucet.

Cleveland's other musical ventures include Shana Cleveland & The Sandcastles and The Curious Mystery. Currently, she's also working on her Famous Faces calendar for 2014.” It's got all the hottest names in showbiz like Wendy Rene, Del Shannon, and the Legendary Stardust Cowboy.”