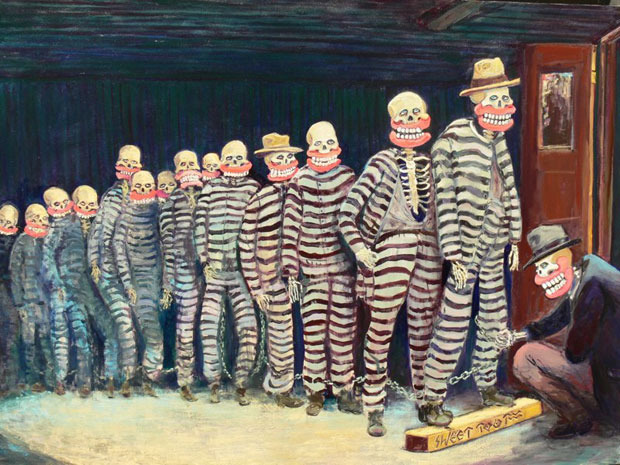 Sweet Toof’s marks
are ornate teeth and pink swollen gums. Even his oil paintings
are all bones and gum. One of my favorites is the five smirky skeletons sitting atop
a tomb that reads “Sleep When Your Dead.” They’re dressed in black suits and
magic stovepipe hats. The grass beneath them are young, and the open sky, daylight
blue.

Sweet Toof started
using magnifying glasses to “distort and enlarge” the teeth when creating
portraits as a traditional-painter-and-printmaker-trainee in art school. In
some of his works, you find characters musing over gallery paintings,
sometimes with a magnifying glass handy.

Once a member of Burning
Candy (he left the crew last year), Sweet Toof comes from a
graffiti background and has been painting in letter form since the 80s: “Through graffiti I arrived at painting teeth
through the simplicity of the pink gums and pearly whites.”

“While studying I had
the misfortune of losing 10 of my friends in a series of freak accidents. Since
then death became a constant theme in my work, and I realized later that teeth
are the only part of the skeleton we can see in the living body.”

But painting teeth
isn’t just about death anymore: “I found that they can be interpreted in different ways
and can easily adapt to collaborations with other artists. There's more
of a dark humor to them now.”

What are your thoughts
on life after death, and immortality?

We're all
born the same and we all die the same. I feel that artists will always be
immortal through their work. When I look at some of the old master
paintings, I still find them to be very much alive today.

When you start painting a piece do you begin with a pre-thought-out concept?

It depends on the situation. Sometimes you have to get in and get out as
fast as possible and be spontaneous. Sometimes the shape of the building
creates a concept and I plan around that. As for my studio work, I'll have a
loose theme in my head, but a lot of ideas are created during all the
preparatory work and patience with the mediums I use (oil and Spray paint are his favorites).

What kinds of messages,
if any, do you try to convey through your art?

A lot of it is commentary on street politics, and some are autobiographical.

Do you know who Banksy
is?

No, but the name sounds familiar.

A self-portrait. Sweet Toof is a painter and street artist from London. His exhibition of latest works is coming to New York at Factory Fresh on the 29th of April.