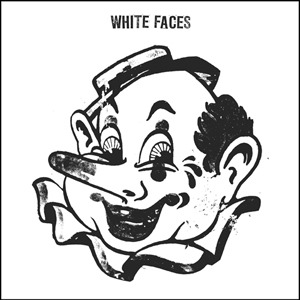 Windian Records has established itself as the premier DC independent record label for punk and garage rock singles. Starting October 31, they are leaving the world of 7-inches behind with the first full-length debut, a self-titled, from Milwaukee’s White Faces. The Wisconsin trio, composed of singer/guitarist Josh Busnelli, bassist Jeff Van Dreel and drummer Christopher Capelle, have a quintessential garage rock rollicking instrumental sound, and light hearted lyrics focused on girls, self-esteem, and more girls.

The record is spirited and straightforward – the band describes it as a “12-inch single”. This is a mixed blessing. While the album serves as a surefire example of crunchy garage pop done well with a bevy of catchy tunes, it also has moments of repetitiveness. Slightly similar sounding pop singles cause it to wane midway through before it picks up again in the final tracks.

One of the strongest sounds off the record is the opener, “Disconnected”, which displays White Faces' more aggressive side. The track kicks off with a swift guitar rift reminiscent of Jeff The Brotherhood’s southern garage rock revamp.I am a strong believer that a band’s vocalist plays a large role in musical first impressions. Busnelli gives a strong showing with his growl that morphs seamlessly from apathy to lovesick puppy throughout the record. Just as every Kinickie needs his Rizzo, a majority of White Faces’ lyrics deal with that special girl (or girls).

Out of the handful of love-laced songs, “Star of Bright” mixes the appropriate amount of cheekiness with sweetly original lyrics regarding space love, like “There is a place I want to go/It is up in Space/But I’ll keep your body warm”. The following track, “Happy”, is also an ode to some angel faced creature, but it lacks when in immediate comparison to the former. The lyrics “I like the way you smile when you are happy for a while” ring slightly simplistic and standard when juxtaposed to “Star of Bright” more innovative take on love.

Besides romance, White Faces also give their listeners a healthy dose of self-esteem in “Stand Up”, which could be viewed as garage pop’s answer to “It Gets Better”. The effortless mantra of “You better standout/You gotta standup for yourself” seems a bit platitudinal at first, but after a few listens you can’t help but hum while nodding along to the clean jangle of soaring guitar solos. The song is one of the most well produced tracks in terms of sound quality. The twelve-song debut wraps up properly with the notable song “I’m Your Creep”. Busenilli channels Glenn Danzing and Johnny Rotten in both his snarl and novel love lyrics that are more concerned with perversity than boxes of chocolate, constructing an impudent take on unrequited love. The clear thought and effort put towards lyrics is one of the reasons White Faces stand out in a sea of plaid and guitar driven garage pop.

The self-titled concludes on an unexpected but creative twist. Unleashing their acoustic side on a hidden track, Busenilli modifies his voice into more a howl than biting bark, generating an instrumental sound with his vocals. The sweet guitar melody, sans drums, produces a roughly delicate tone, signaling that White Faces have a variety to them that will hopefully be heard on their future releases.