Retromania: Pop Culture’s Addiction to its Own Past by Simon Reynolds 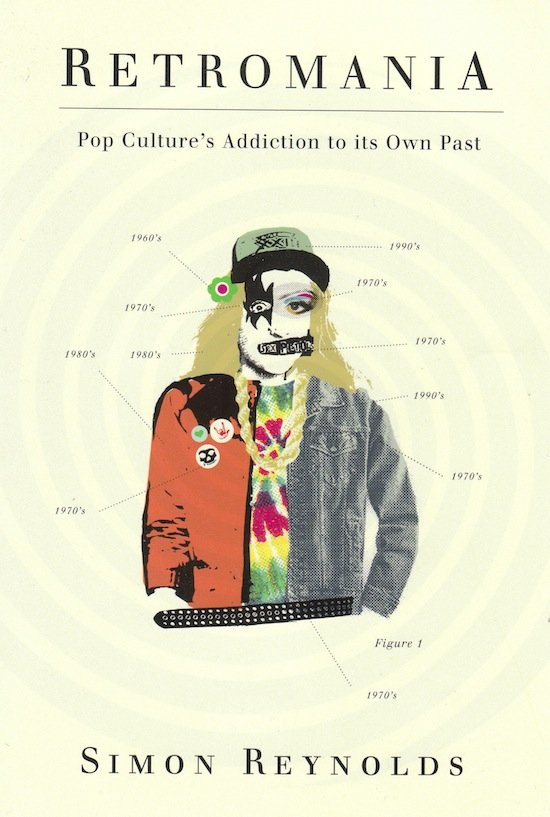 I love words, really – in any format. In an article or on a screen, on a sticker or the back of a sweatshirt. But I especially love words in a book or in music. I love words even more when it’s a book about music. When I first started reading about music, a new world was opened up to me as a music lover; backstories and secrets you could never find on the internet. I introduce you to “Oh Darling! Please Read Me,” a monthly column about books about music.

The year is 2010 and writer Simon Reynolds is sitting in his apartment in the village of New York City. He realizes that there are yet to be flying cars, as he was promised as a child. He listens to the radio and hears advertisements for “U2, Bon Jovi, AC/DC, Metallica, Eagles, Paul McCartney” coming to a city near you this summer” and he begins to lose track of what year it is. Kanye West’s “Runaway” plays and he spots three samples during the 9-minute and 7-second listening period; “Mary Jane” by Rick James (2001), “Expo ‘83” by The Backyard Heavies (1971) and “Introduction to Star Time” by James Brown (1963), and then he wonders to himself:

“Is nostalgia stopping our culture’s ability to surge forward, or are we nostalgic precisely because our culture has stopped moving forward and we inevitably look back to more momentous and dynamic times?”

And then he starts writing the book:  Retromania: Pop Culture’s Addiction to its Own Past.

Now this scene didn’t actually happen, although that’s how I picture this book came about. (He does ponder the absence of flying cars in the book). As an avid music junkie, it is easy to be just that – someone who listens to music constantly, but with time comes the desire to know more, to know the history and maybe even the philosophy behind the music we hold so near and dear.

This month I decided it was time to do just that with Reynolds’ hefty book that explores modern society’s obsession with the past – especially in music. “We live in a pop age gone loco for retro and crazy for commemoration. Band reformations and reunion tours, tribute albums and box sets, anniversary festivals and live performances of classic albums…Instead of being about itself, the 2000s has been about every other previous decade happening again all at once”. Reynolds’ has a few theories to this constant loop of nostalgia aimed at decades many of us didn’t even live through. The first being the “increased presence of pop culture in our lives” through means of Youtube, the iPod, Spotify and social media. The second being old artists doing “reunion tours, reissues and comebacks.” The third being “new old music,” which Reynolds’ defines as new music being released that is heavily influenced by genres and artists of the preceding decades.

The technology used to both listen and create music is a defining asset in Reynolds’ theories. He uses Pitchfork writer Eric Harvey’s analysis that “the 2000s may be destined to be the first decade of pop music…remembered by history for its musical technology rather than the actual music itself.” In the chapter titled “Music and Memory in the time of Youtube,” Reynolds walks through how the use of the platform fills the internet with “memorabilia, documentation recordings, every kind of archival trace of our existence,” leading to “…the presence of the past in our lives has increased immeasurably and insidiously” catapulting us into a “long present” and removing the possibility of “quick fads.” Then he dives into the MP3/iPod, or as he graciously titles, “the audio equivalent of fast food” – responsible for removing “the burden of desire” from the listening process. Reynolds reminisces on the era of having to wait to go buy a record or CD, depending on what you could get your hands on, and having to listen to it in whole. This very idea seems to be something anyone born before 1985 seems to dangle above younger generation’s heads (although ironically, vinyl sales are booming in 2022 with 5.3 million sales this year already), and they’re not fully wrong – we don’t know what it’s like to wait. In many moments throughout this book, I found myself aching for music listening habits of the past, but being grateful for the modern habits. And while I agree that due to modern listening technologies many of us are impatient and needy, deep down I am beholden to modern technologies. Thanks to Spotify or streaming, I have access to so much music that I would never have discovered had I lived in the past.

The second side to Reynolds’ theories ponders the ways in which music is made and performed: sampling, DJs, compilations and boxsets. Using hauntology, the elements of social and cultural history that “haunt” us, “recording has always had a spectral undercurrent. As audiotechnology scholar Jonathan Sterne points out, recording separated the human voice from the living body for the first time.” And Edison did craft the photograph to preserve the voices of the deceased. Noting that most of today’s music strives to mirror the sounds of generations past, Reynolds theorizes that “fixating on a style that is remote either in time or space inevitably condemns the devotee to inauthenticity. Either he strives to be a faithful copyist, reproducing music’s surface features as closely as possible, risking hollowness and redundancy; or he can attempt to bring something expressive and personal to it; to work in contemporary influences and local musical flavors which then risks bastardizing the style.” There are many aspects to modern music that feel inauthentic; massive marketing schemes, over saturation of a song, the glitz and the glamor of the musician, the cameras everywhere always capturing every move. I know I’ve struggled to feel intimately connected to many live performances over the years.

As I finished up the book,I thought, “what a sinister and callus way to look at music?” – of course with a smirk on my face – because as morbid as it may be, I couldn’t help but feel connected to many of the things Reynolds was saying. After diving into the past year alone, I’ve found too many concrete examples to not explore Reynolds’ thought with an open mind. Since the start of this decade, we’ve been bombarded with the Friends and Harry Potter reunions, The Get Back Beatles documentary, The Andy Warhol Diaries series as well many attempts at creating a storyline for the decade’s past antiheroes (Cruella, The Joker). TikTok is flooded with old songs, The Batman and Spiderman have both returned and it’s not Tobey Maguire or Christian Bale in the suits. Now everyone is obsessed with 2000s culture – “Y2K.” Oh, and disco is very much making a comeback (not upset by this).

It may appear that Reynolds’ is arrogant or insulting, and that I can understand, but he willfully admits his own obsessions to the past, just like all of us. Retromania itself is a direct form of what he is berating about in the entire book. Hidden between the lines of the text, he is pleading for a past when music was still pioneering through new genres and unheard of subcultures – and believe it or not, he feels guilty for wanting to repeat the past so bad. “At the start of this book I posed some questions, most of which have been answered along the way. But here’s one I haven’t really addressed: Given that I enjoy many aspects of retro, why do I still feel deep down that it is lame and shameful?”

Beyond my current exploration, there are pages and pages of musical sentiments and antecedent-infused thinking. In one chapter, he compares Deadheads and Northern Soul fans with their fixation to the ’60s: “defying the passage of historical pop time.” He talks about Ariel Pink a lot, and has a chapter called “Reunited and it Pays so Good.” He talks about the heart and start of punk and he explores Ned Rorem’s idea that music evokes “Nostalgia for the Future.” And while I don’t want to bore you with detailed synopsis’ of the whole book, I must leave you with my favorite answer to the question posed at the beginning:

“Even when it is not based on sampling, the pop culture we have today mirrors the way that so much of the economy in the West is no longer based on production. R&B, funk, reggae…these major musical forms were created by people whose everyday life was surrounded by the making of things (industry) or growing of produce (agriculture). Think of the connection of Motown to Michigan’s auto industry. Much the same applies to country music or to white working-class responses to black music such as heavy metal. Today’s post production pop is far more white-collar. It involves a different skill set (information processing, editing, framing, packaging) that breaks with the ‘work aesthetic’ or earlier black and black-inspired forms.”

When I start to think too much about the past, my head begins to spin and my chest gets tight – are we stuck? While I might not agree that music is totally drowning in the cyclical currents of the former artists and movements, Reynolds makes a very alluring point. It does feel like sometimes the technologically obsessed world we live in lacks the ability to create anything beyond what is already there. Day in and day out our minds are filled with the past (even that Instagram post you liked right now, is the past.) We make sure to capture every fleeting moment via iPhones and god forbid we don’t share our shrewd sentiments online about things that already happened. It isn’t anyone’s fault, and none of us can escape admiring it because well, everything seems better in hindsight.

Reynolds leaves us with this: “Is it possible or desirable to preserve and remember everything? Maybe we need to forget. Maybe forgetting is as essential for a culture as it is existentially and emotionally necessary for individuals.”

Nick Carroway once said in the Great Gatsby that “you can’t repeat the past,” but it seems like we’re living in culture of Gatsby’s seductively whispering into our subconscious, “Of course you can, of course you can.”

Side Note: Since this book was written in 2010, a decade later there are still many modern technologies and references that pertains to Reynolds’ findings so in some instances when talking about modern examples, I am filling in the blanks for him.

Reynolds, S. (2012). Retromania: Pop Culture’s addiction to its own past. Faber and Faber.