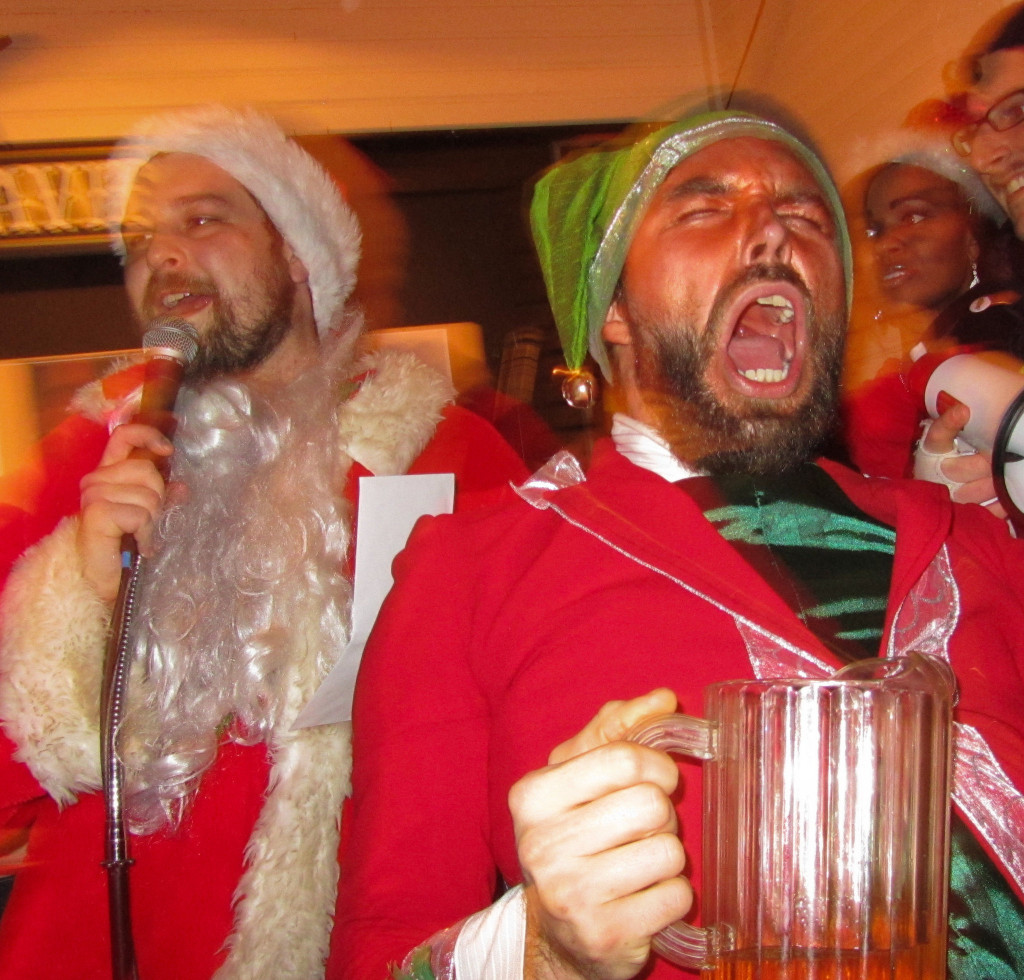 As the holiday season is upon us all we make our ways into the homes and hearts of our families and friends, catch up on all the ludicrous memes that our bros might have missed over the past year, eat copious cross sections of species and sweets, try to get excited about the big Christmas Day NBA come back, pray that Tyler the Creator can beat his sound-guy-vandalism rap and stomach more Michael Bublé caroling covers than all the mixed seasonal hooch from various 'ugly-sweater' office parties and Santacon bar crawls combined. So while you mull over all the people you failed to give a shout out to this year, check out some of the gifts from some of your favorites this week in no particular order.

Javelin scored a short film video for “Canyon Candy” which premiered earlier this week at NYC's Clocktower Gallery. For those of us not in attendance, read the gallery's description of this elaborate exhibit:

“Beginning with an entrance through a wind-washed cabin, followed by a winding walk in the canyon’s termite hills and cactus fields, visitors will encounter coyotes, campsites, big sky, and vignette sequences from the film. All paths lead to a saloon-style theater space featuring the full 16-minute Canyon Candy film – the ideal cowboy den after a long walk through the canyon, complete with strawbale seating, gingham tablecloths, and sasparilla.”

If the Coen Brothers remake of True Grit left you thirsty for more modern western redux, then Mike Anderson's film adaptation of the aformentioned Javelin track will be an answer to your holiday wishes.

Be sure to check out Javelin's twanged out warped brilliance on “Estevez” here. M.I. and producer DJ Cutt of Constant Deviants dropped “Walk of Fame” this week. Cutt brings some of that classic sample of muted o.g. gangster horns to the table with a sample hook that sings, “Fly me to the moon, let me play among the stars.” M. I. explains their message like, “We're just kind of relaying some of the urban plight and expressing a plan to escape!”

Gabriel White of Knoxville's Yung Life has a grand 13-track album coming our way entitled Relay. In a recent conversation with Mr. White we are told to expect “a variety of songs including nylon folk strings, to synth sounds like in 'Over Time in Time.” With no specific date slated for release, Gabriel hinted that Relay will be in our lives circa late January or in early February. Artist to watch for 2012 folks.

If you have yet to hear Yung Life's new single “Breakers” then be the first of your friends to hear it here. If you thought that 80s FM pop should have been more of the Cleaners from Venus mindset than Flock of Seagulls then you have waited and possibly wasted your entire life until this very moment. Their EP will come out in early 2012, we will keep you posted on the further details. From Seattle, Washington comes the sweet voice of AdraBoo along with production from DJ/emcee Action Jackson as Fly Moon Royalty who dropped the track “Do What You Say” this week. The track is the first taste from their upcoming self-titled EP due in early spring 2012, AdraBoo describes the song's romantic vibe as such; “Do What You Say' is about mainly wanting someone who maybe you're dating – or close to, or admiring from afar – to physically make the move, but it also speaks to what happens when you step back for a minute and how you can get more than you thought you might be able to get, all with a little bit of patience.”

Parenthetical Girls gave us the gift of Parenthetical Girls Save Christmas this year. As a sleigh bell jingling piece of pop splendor that will save you from the commerce crafted “Hey Santa” loops that serves as the exhausting reminder of the scam that lies in the encouraged excesses of holiday shopping. Look for Parenthetical Girls on tour with Los Campesinos! in Canada / North America in early 2012. Check your local listings folks.

Kathryn Calder gave us the beautiful indie winter time comforts of “Turn a Light On.” From this year's expansive release ​Bright and Vivid, Calder displays her warm songcraft in the Geoffrey Tomlin-Hood and Leif Parker video where she walks amid lush wintry landscapes followed by a series of torches floating on air.

Scotland's The Twilight Sad have teamed up with legendary producer Andrew Weatherall for their upcoming No One Will Ever Know record. Riding a darkness found on the recent excellent leak of Pop. 1280's “Bodies in the Dunes;” we welcome hearing the Sad get the excellent Weatherall treatment who produced Fuck Button's Tarot Sport, helped give Primal Scream their acid house moment and gave us the My Bloody Valentine “Soon Sabres of Paradise Remix.” No One Will Ever Know drops February 7 on Fat Cat Records.

Crash Symbols is a mixtape phenomenon that came out of Dwight Pavlovic and Liz Toler's porch from their home in West Virginia while Born Gold and Jheri Evans were hanging around and couch surfing. The result is some of the most eclectic, tripped up rhythms from a variety of bedroom-beat projects with a Ryan Hemsworth remix of Waka Flocka Flame's “Hard in the Paint” for good measure.

Brooklyn's The Habit has a video of 19th Century proportions documenting an American's immigrant tale to the new world and a tough auditioning panel consisting of Frederick Douglass, John Wilkes Booth and Mr. Lincoln himself. The Habit's album Lincoln Has Won is available now on Reel to Reel Records.

In the continued spirit of giving, Jimmy Moonboots has been hard at work this winter with an EP called Long After I'm Gone and gave us the future classic “Far Away.” Like a distant time capsule buried 40 years from now in the Big Sur beds of rock and sand, we hear the sound of what we hope will inform the popsters of promise perhaps half a century from now. A documentary on Dudley Perkins just got released via Xylophone Films entitled Interplanetary Peace Talks 2012 A.U. In what might be one of the rawest, realest and rad(est) documentaries of the year, you will delve into the mysticism of Dudley's Declaime moniker, watch films of Perkins growing up in Oxnard, hear tales of him and Madlib being homeless back in the day, stories about getting booted out of the military and even some elaorate home pasta recipes. Happy Holidays indeed!

Leave it to buzzster darlings Kisses and Keep Shelly in Athens to make us a mixtape for this magical season of winter downchills and family / friend chill downs.

Lots of pedal steel at this time of year as the world embraces the feel good sensations of being back down on the farm with the folks. Wandering Foot's WNRN performance of “The Fling” out of Charlottesville, West Virginia will rekindle those tender moments of returning back to that fictitious small hometown and reuniting or attempting to reunite with a lost love.

In keeping the holiday vibe going, here is Sharon Jones & the Dap Kings with a lively VHI performance of “He Said I Can.” If the bright lights blazing behind the Kings were not enough to make the season bright; Sharon's golden dress and golden vice shines even brighter.

While the Week in Pop applauds the newcomers to the game, breaking news of 'lost' Top of the Pops footage of David Bowie and Mick Ronson performing a spirited “Jean Genie” compels us to look back to that golden year of 1973. While the BBC wiped their master of the performance, cameraman John Henshall kept a copy and shared it with the world as a treat for all.