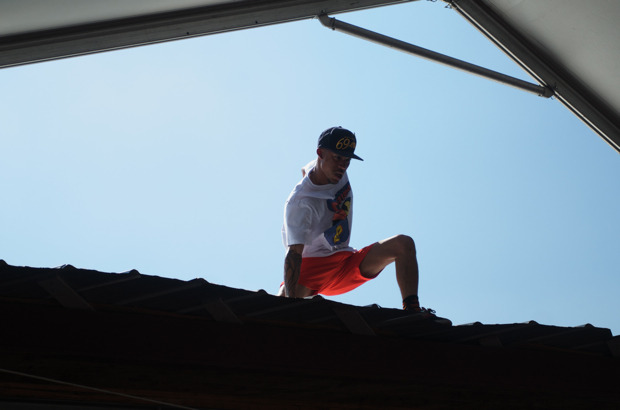 Blake: I saw James Blake. He sat down next to me in the VIP tent at French Legation. He had three British hoes with him. I gave one of them my chair because that's what gentlemen do. Sean Stout and I listened to James Blake and attempted to understand why people like his music. No conclusions were reached.

Jason: I saw the line outside Stubbs on Thursday. I'd rather experience something as emotional as Blake's dubstep croon on my own time.

Will: James Blake and Duran Duran at Stubbs, WTF. I saw it. I stayed for Duran Duran exclusively because “View To A Kill” is the best James Bond theme song of all time. But I gotta give props to a band that steps out on stage like it's still 1987, with the singer, in a voice that wouldn't sound out of bounds narrating a segment of the Moth: “The name of this band is Duran Duran!”

Jeremy: Who sucked more air from the outdoor amphitheater, those guys, or Dave Grohl?

Will: Seeing Foo Fighters was some surreal shit. On one hand, I don't like them. But shit – Dave Grohl is the guy who shouted “Hi Axl!” into the mic at the 1992 VMAs after Krist Novoselic hit himself in the face with his bass (treat yourself to the last 45 seconds of that performance).

Jeremy: And if not James Blake or some old dudes, who won CMJ?

Jason: Does anybody really win at SXSW anymore? I'm replying from my phone and have had three Bloody Marys. But I think Yuck sorta ruled the day. They played a whole bunch and everybody seemed to be into them. I can't argue with that.

Jeremy: Defining winning is tough.* I think Odd Future won the four day sprint, though. People were climbing between the barbwire and chainlink fence to see him at the Thrasher show. I think Yuck will do well with critics and old dudes (though I don't 'get' them), but I think Odd Future was already the paradigm shift away from critical interest in softer/safer music. It will now take about one week for people to start imposing no-swag zones.

Sjimon: Despite the excessive hype and lots of retweeted #fucktyler tweets (chock full of f-bombs, unrepeatables, ridiculous commentary on Chris Brown's hair), the Odd Future kids had more energy this week than that Fallon performance. I feel like they're getting into an impressive groove that goes beyond the initial shock value and undeserved horror-core labels. Tyler was in full bridge-burning mode too, at the Fort, “There's a lot of fuck ass bloggers out there, just wanna say fuck Pitchfork!” And a big deal was made from a fan's banner reading “FUCK STEVE HARVEY” which sure got the 'Gang all riled up.

Also Wiz Khalifa slayed it, big ups to kick ass performances of “Wakin' Bakin,” “Black and Yellow” and about 25 shout outs to the release of “Rolling Papers” March 29. True swag.

Jeremy: Did anyone test drive a Fiat?

Jason: No, but I took two pertticabs. Love the petticab drivers. Did anybody catch more resentment from the locals this year than usual?

Chris: Resentment from locals is at an all-time high. Organizers were careful to contract out cute little charts on the economic impact of SXSW. But I've seen more than a few “don't move here” shirts being worn by Austinites whose asshole tightness rivals Williamsburg denizens. And it's easy to see why. But if you bitch about living in Austin then you need a cowboy boot to the face.

Jeremy: They don't show it. I couldn't get off the phone with the dude I called at Radio Shack because he wanted to find the closest location to where I was standing. And someone hand-drew me a map to show me how to get to my own show.

Alright, greatest shit that went down?

Chris: Either downing the last of a Sailor Jerry and Xanax at sunset before OFF! at Mess with Texas, or watching my friend grab Michael Cera's wrist in the pit at Thee Oh Sees show and screaming “MICHAEL CERA! C'MON” just as the song ended, or Cloud Nothings with Imposition VIP/backdoor man/Brooklyn transplant Sal, who noted “these guys are fuckin' good!” I couldn't agree more Sal.

Jeremy: Loudest band other than A Place to Bury Strangers at the Imposition?

Sjimon: Some rowdy performances by Killa Kyleon, Dom Kennedy, Fiend & Cornerboy P, Smoke DZA, Big Krit and Curren$y in between running back and forth from VIP to backstage to get interviews with Evidence, Jay Rock, Dom, etc. The gig was blazed up, the fans riled up, all the entourages were fired up and so were the no-nonsense bouncers.

Sjimon: Yelawolf also performed some “Trunk Music” shit at the Fort that featured some quick spit delivery that almost made the wristband cues worth their one and a half hour average wait times.

Jen: Erykah Badu as a drummer for Matt & Kim, highlight for me.

Jeremy: The week in industry bullshit, condensed into one anecdote?

Will: Vice/Dell/whoever else's Noisey show. Decent bill, but what an industry clusterfuck. I was taking pictures from the VIP side for a little while, and three different people told me to make sure that I got the Noisey banner that hung in back of the stage. I mean, I know that Impose always hangs the banner at the Imposition, but no one accosts photographers. The whole thing had the air of a really expensive corporate project, not aided by the stripper cages FTW.