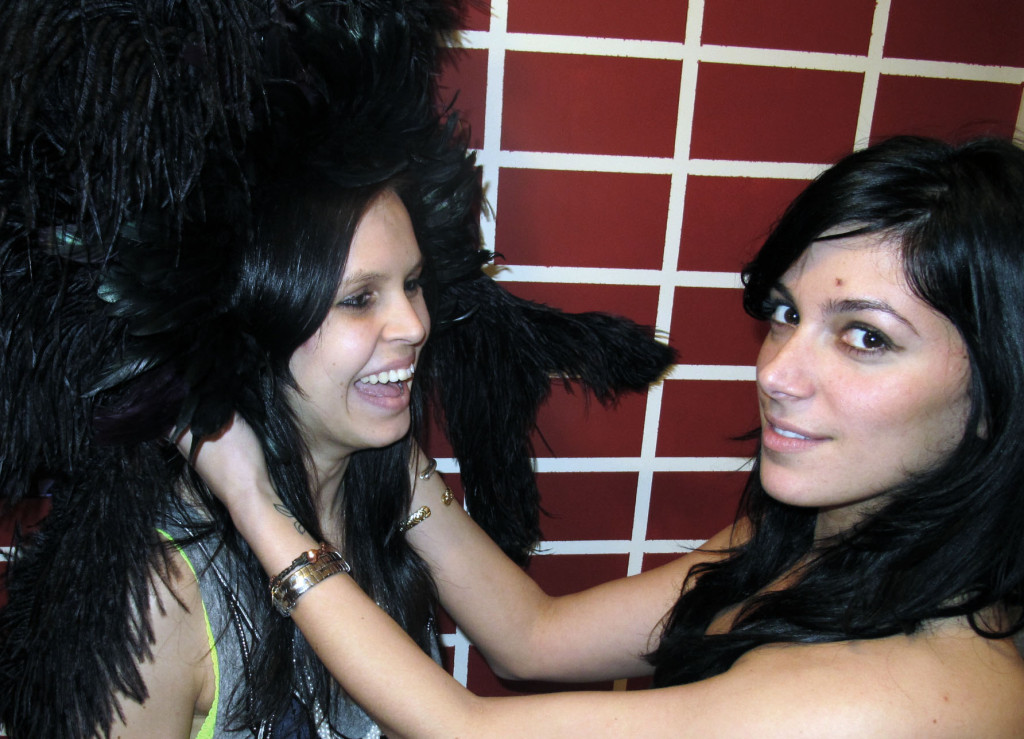 New York Fashion Weeks is followed by two brief, noisy, cheap-vodka-filled nights at Glasslands Gallery: Williamsburg Fashion Weekend. Predictably, it's at least 60% WTF (white boys with hairy legs in short-shorts rapping while girls in neon foam cube dresses pelt half-cooked hotdogs into the audience – no, I'm not kidding) and then, thankfully, a handful of up-and-coming local talent actually worth paying attention to.

Part of the latter group is designer Rawan Rihani, whose line Nightswimming (presented with jewelry by fellow RISD grad Erica Peterson) was one of the highlights of the weekend. Having whet her teeth working with designers like Yigal Azrouel and Heike Jarick, Rihani recently shifted focus back to her own art: painting and making crazy-awesome things (including wild feathered headdresses!) for her musician and performer friends to wear on stage. She and Peterson share an apartment/studio, inspiration board, and materials, and in many ways their collections flow together naturally. Their workspace walls are covered with Rihani's abstract paintings, whose colors and textures serve as the inspiration for her fabric creations. Even the name of the line, Nightswimming, is abstract and organic: it comes from recurring dreams Rihani had of being underwater.

Then in January, almost by accident, they suddenly found themselves with a slot at Williamsburg Fashion Weekend, and were tasked with less than three weeks to condense those textures and atmospheres down to ten looks for a proper runway show. But they managed, and apparently did a damn good job of it too, since here we are writing about them. Rihani's debut collection–a preview of a more complete 35-look collection to be showcased in September, with production and distribution soon to follow–focused on textured blacks and greys, draped and twisted neutrals, and unexpected pops of neon. Many of her pieces can be styled multiple ways; a floor-length black dress converts to a layered mini, and a floaty beige skirt doubles as a drapey blouse. Peterson's jewerly incorporates similar shapes and textures, using curled and woven metal and scraps of fabric. Her own jewelry line, Ladybird BK, is also set to launch this year. Point: Dudes, your girlfriends will love this shit once it's available.

Rihani and Peterson invited me for a look inside their workspace — here they are playing dress-up with Rawan's headdresses amongst the dress forms showcasing their designs.