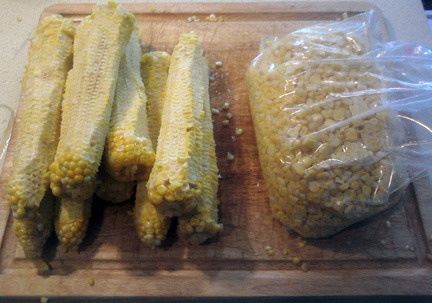 The other day I woke up to go to work and the sun wasn't shining. Then when I came home from work I listened to an album that wasn't Maggot Brain. Then I went to Ample Hills for a double-scoop cone and the line wasn't crazy long. Something strange is going on here… HOLY SHIT, SUMMER IS ALMOST OVER.

The now bright and beautiful greenmarkets that are bursting with in-season veggies are not far from turning into cold, grey potato and beet markets. Sure, every season has its flavors, and I appreciate that, but that doesn't mean I can't be sad to say goodbye to freshly juiced watermelon, eggplant parmesan and fruit smoothies for breakfast.

Fortunately, some of summers best flavors can be enjoyed well past their season. I'm not talking about buying organic corn from another hemisphere at Whole Foods in January. When local foods are properly preserved while they are in season, their flavor far surpasses anything trucked hundreds of miles onto grocery store shelves. Not to mention, when a food is in season, it's abundance results in lower prices. I bought the biggest bag of kale I've ever seen the other day for two dollars. I bought a huge bag of apples for the same price.

I've been experimenting with a few different preservation techniques over the last few weeks, trying to figure out what works best in a cramped kitchen (does anyone in Brooklyn have a larder I can use?) and a shoestring budget. What I've found is that freezing, lactic acid fermentation and–last but not least–alcohol fermentation work best for me.

So this winter don't be caught eating shitty food. Start preserving now and let summers vibes resonate in your kitchen all winter long.

Freezing can really be as simple as you want it to. For example, every week I buy blueberries. If I buy three pints it's only a couple bucks more than two, so every week I buy an extra, wash them off and throw them in a Ziploc bag in the freezer.

Corn is slightly more time consuming, only because it requires blanching, which will help it keep its flavor for a longer period of time. Simply throw the cobs into boiling water for a few minutes, move them to a bowl of ice water, cut the corn off the cob and into a bag and move it to the freezer. While I might not be craving blueberries in the dead of winter, I definitely plan to add a handful of corn to every chicken soup, chili and taco I make for the next several months.

Tomatoes are a quintessential summer food, but a simple homemade tomato sauce can be frozen and enjoyed throughout the winter. I'm not crazy about spaghetti, but when there's snow on the ground and all you have in the cabinet is pasta, it doesn't hurt to have a killer sauce made with fresh, local ingredients to top it. It's not hard to make either. Caramelize some onions and garlic, add peeled and diced tomatoes, basil, oregano and salt, simmer for about 45 minutes and you should be good to go. Try to squeeze as much juice as you can out of the tomatoes without getting any skin or seeds in the sauce. I put all the extra bits in a strainer over a bowl and push down until all the good stuff drips into the bowl. Some greenmarket vendors have a box of bruised tomatoes at a discounted price, go for those and your sauce might even be cheaper than the prego/ragu Monsantox bullshit.

Lactic Acid Fermentation breaks down sugars into, well, lactic acid. It can be done in any open vessel, but crocks and wide mouth mason jars work best. Lately I've been obsessed with pickling kirby cucumbers because they don't require cutting to fit in mason jars, so they stay crispy on the outside and juicy on the inside. Don't be dismayed by the foodie price of some fermentation crocks, if you dig online you can find inexpensive ones. And here in New York, Brooklyn Kitchen sells Ohio Stoneware crocks for $20. I haven't met a vegetable that couldn't be preserved through lactic acid fermentation, but my personal faves are cucumbers, cabbage, garlic, carrots and radishes. Add seasonal herbs for extra summer flavor. There's a garlic, apple and tarragon ferment on my counter right now that I'm pretty excited about.

Fruits can be lacto-fermented as well, either mixed in with vegetables or as chutneys. Despite mangoes not growing anywhere near me, I made a mango chutney with the first soft ones I could find that is great with baked chicken. Peaches and apples work great too, which are both abundant right now. Simply chop up fruit and mix with grated lemon rind, whey and whatever herbs and spices you want to add. Raisins are are good addition as well. Press the ingredients into a wide mouth mason jar until all the fruit is submerged–making for an anaerobic environment in which good bacteria thrive. Leave the jar on the counter for a couple days at ambient temperature before refrigerating for a couple months or freezing for longer periods.

I recently started a ferment of only herbs–basil, tarragon, oregano, chives, cilantro and garlic–for an addition to winter soups and salads. I haven't used it yet, but herbs are much cheaper, tastier and easier to find than they will be this winter. If it works, I'll be giving winter soups a little summer infusion and if doesn't work, I only wasted like $6.

Fermenting foods doesn't always have to be about feeding stomach bacteria or increasing nutrient availability. Sometimes it can just be about getting fucked up. Because of the wide variety of extra gear involved, alcohol ferments may seem intimidating, but I was pleasantly surprised to find I could make alcohol using only a wide mouth glass jar. My first alcohol ferments have been mead, only because I could get all the ingredients I needed–raw honey, fruit and water–at the farmers market. Wild yeasts will find the honey's sugar and break them down into alcohol right on your kitchen counter. Simply fill a large wide mouth jar with honey and water at a ratio of about 1/5. Add whatever summer fruits you want, I've had success with blackberries and apples so far. You only want the essence of the fruit, so don't blend or juice, just add small berries whole or larger fruit chopped. If you are adding foreign yeasts, stir them in now. Stir vigorously at least twice a day and taste regularly. After about a day it will be bubbly and carbonated and once the carbonation dies down it should be alcoholic. You can either siphon it into a jug with a carbon lock for a couple months–a five gallon jug, carbon lock and siphon should only run you about $10-15–or bottle it now. If you bottle it young make sure you keep it in the fridge and keep an eye on the pressure as yeasts are still living, eating, shitting and dying in there and the bottle could become dangerously pressurized.