Tips From an Amateur Baker 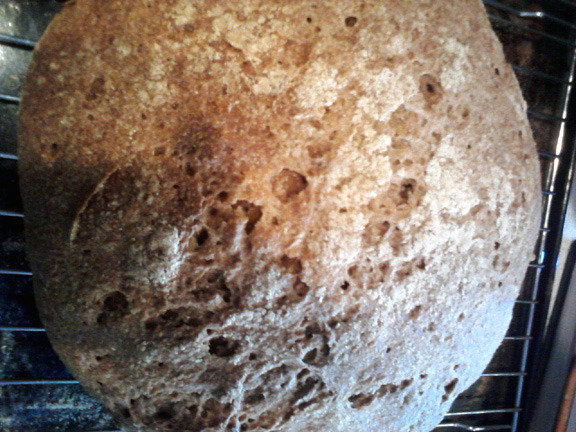 No food is as universally eaten as bread. From the sourdoughs of San Francisco to the flatbreads of Latin America and South Asia to the multitude of artisan breads across Europe, every culture (except for those Atkins and Paleo jocks) has their own take on what is for the most part just flour and water. Twelve thousand years ago, flatbreads were cooked on rocks in the sun. Six thousand years ago, wild yeasts were discovered, rumor has it, by a slave in Egypt who forgot about some dough only to find that it had risen while it was missing. He punched it down to flatten it back out, baked it and the result was the world's first leavened bread. Nowadays it's hard to find a loaf that doesn't contain high fructose corn syrup or wasn't pumped out of a lifeless factory. In fact, before the industrial revolution, cultivating wheat was hard work and bread was highly treasured.

I've been making my own amateur bread for almost a year now. It makes our apartment smell awesome and gives me an excuse to stay home and in the kitchen on my day off, plus it saves me some money at the Greenmarkets. I'm no baker though – there have been plenty of mistakes and messes along the way. So many that I felt the need to compile a list of tips and tricks that you won't find in your bread cookbook or any culinary institute classroom. Can you hear the yeasts calling? Learn from my mistakes!

When it comes to recipes, I'm usually quick to improvise or stray from the original. I eyeball measurements and throw in a little extra salt here and there. But with bread, I'm hesitant to do that because baking isn't just cooking, it's cooking with living yeast. It's science. Too much salt or adding salt too early inhibits yeast and your bread won't rise. Same goes with adding fat such as oil or lard – too little and you'll have a dull loaf with no flavor or texture, but too much and your bread won't rise. That doesn't mean that once you've followed a recipe a few times, you can't experiment.

Get your shit together / don't answer the phone while you're kneading

Even if your mom is calling you. This might sound like common sense, but nothing gets a kitchen messier faster than having to scrummage through the cabinet for salt after you've already stuck your hands in the dough.

Use cheap ingredients (but not the cheapest)

I don't like pesticide residue either, but I can't with good conscience recommend buying an $8 bag of organic sprouted spelt flour when you're making your first loaf of bread. No matter how high-quality the ingredients, it's going to come out an ugly, messy ball of something only its mother could love/eat. Don't use shitty oil though, ever.

We can't have pets in our apartment, so instead of spending my free time walking a dog or showering a kitten with love, I spend it feeding rye flour to a jar of microscopic wild yeasts. Maintaining a sourdough starter is easy (if you don't have a social life) and is IMHO absolutely necessary when it comes to making bread. Fill a jar with half water and half flour, stir and cover with cloth. Every day or every few days add a little more flour and water. When you're making bread, add a ladle-full of this to your sponge.

Like most things scientific, it's harder to understand bread than it is to merely admire it's coolness. This ball of wet flour is RISING, it's ALIVE MAN. I mean, look at your shoes next time you bake bread. YOU ARE SOOO CONNECTED TO THE UNIVERSE RIGHT NOW. Try to understand it, but if you can't, just put a crystal in front of the growing mass and call it a day.

Don't listen to a record

This goes hand in hand with the phone thing, but I still want to throw it out there that flipping a 7″ every two minutes while kneading is a pain not worth enduring for higher fidelity.

Use a spray bottle, not a baking pan

A steamy oven makes for better rising because it keeps the crust soft during the initial spring. You can either spray the loaf and inside of your oven with water, or you can clean up hundreds of hot glass shards after your baking pan explodes as you pour water into it in the preheated oven (as my bread cookbook clearly states to do).

If you're going to seek advice on the internet, don't assume that the first Google result for “why is my bread weird?” is the Bible. Here, for example, are two Youtube videos saying the exact opposite about kneading. Right. Wrong.

Despite what the food profit pyramid says, bread makes you fat, so if I'm going to stuff my face with carbohydrates I prefer to take the time to work it off by kneading my dough by hand rather than watching a robotic skynet KitchenAid hook do it for me. Plus, you can enjoy the bread even more knowing that secret salty ingredient is your sweat.

Turn the fan on

In our apartment, using the oven sets off the fire alarm, so before you get started, put a box fan in front of the alarm or just rip the batteries out in a fit of rage.

Don't put it in the fridge

Your first loaf of bread is done but only two things want to eat it: you and mold. You've only got a few days when it's in the cabinet, and the refrigerator will dry it out, so cut it in half and keep one half in the freezer while you force down the other half, trying to convince your friends that your first attempt at homemade bread was a success.

So it's been a year and your bread is still ugly. Who cares? It's still better than anything at the grocery store.