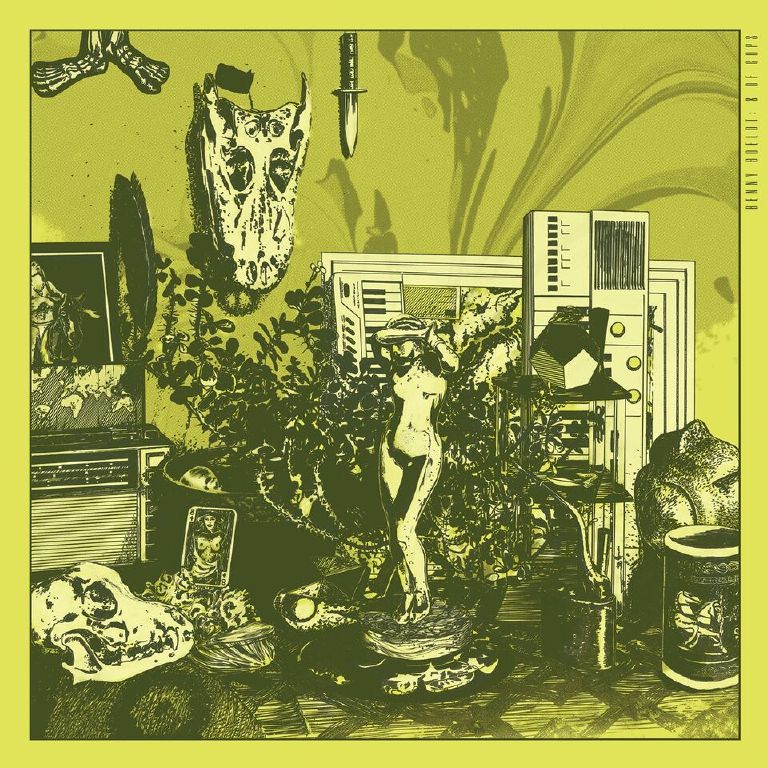 When we recognized Baltimore as a cultural hub in 2008 Michael Bouyoucas of Thank You described the unifying fabric of the city as collectives, performance artists, and musicians with no interest in becoming famous. For those who have like Future Islands, Dan Deacon, Double Dagger, and Beach House, there is not much publicized backlash or resentment. It’s widely understood these groups deserve everything they’ve earned and remain celebrated in hometown shows that typically include a jam packed secret show at a DIY haunt, like say Floristree, where they once played to six people. Among the unfamous and definitive of that era of Wham City and Whartscape performers was Adventure, a lo-fi super hero that once wore a blue body suit. Of course, that look can’t live forever. Next week the Adventure moniker will be temporarily retired in favor of going by his government name (or perhaps his disguise) Benny Boeldt for the upcoming 8 of Cups release.

Boeldt moved to Baltimore in 2007. Arriving at the height or the capsizing of the scene, depending on who you ask. He released three Adventure albums on Carpark, maneuvering through 8-bit dance manipulations and graduating to New Order-esque synth pop on Lesser Known. Throughout his work, the Adventure sound maintained a sense of gamer anxiety. Adventure blurred the line between writing songs and programming levels. Anxiety sustains as Benny Boeldt on 8 of Cups, but it no longer derives from a sophomoric source. Boeldt lives in a different Baltimore. The awareness that comes with living in a post-uprising city has infiltrated the process and that rising feeling, that level anxiety, has been replaced with a contemplative tension.

2013’s Weird Work delineated into an IDM terrain, but 8 of Cups leaps further into frame to creates a fussy, glitchy assault of micro-samples. Literally 100s of samples rain down on this record. Largely compiled from VHS tapes, the songs on 8 of Cups demarcate a maturity in his songwriting. “Blue Sky” thwarts its title for a funereal overture. The cathedral organ tones provide a balanced undercurrent, while Boeldt barrages the remaining space with a glitched-out maelstrom. While the intensity and disquiet is dominant, 8 of Cups is not humorless. The vintage kitsch of sampling VHS and New Age CDs boosted from thrift stores homages a bygone Baltimore. Boeldt recognizes the turmoil, but embeds the record with a “not dead yet” dedication to the Wham-Whart era.

Stream 8 of Cups below and read on for a brief interview with Boeldt.

This is your first album under your given name. Why did you decide to retire Adventure?

The sound palette I’m working with now doesn’t coincide with what my music as Adventure had become. There never was any consistency record to record in terms of over-all style, I figured it was time to give the project a rest at least for now until I start making pop structured music again. But who knows, once I get to that point I could pick a new name once again, Adventure is a common word and name, there are often mix ups between other bands called Adventure.

VHS Tapes are the catalyst for 8 of Cups, but to go even further what led to your decision to start with VHS?

For one, the place that I live in has a massive VHS collection, hundreds of movies. I also find weird sounds from records and tapes, things like the CBS sound library and new age CDs from the thrift store. VHS just happened to be where I started when I began to collect sounds for 8 of Cups.

In working with the VHS medium what were some unforeseen setbacks or struggles that you encountered? Was there also any illuminating experiences you had in working with VHS that offered breakthroughs?

A lot of times I ended up using sounds or vocal elements that I wasn’t expecting to use. It became easier to compose songs when I began with samples as a skeleton to build off of. Sometimes I would find a songs worth of sounds just in the previews of a movie, things like explosions can become an assortment of percussive sounds and hits.

The album title is a reference to a tarot card. What’s your experience with cards? Do you read them or did 8 of Cups come from having your fortune read?

During the Baltimore riots there was a week where we had a 10pm curfew. One night I ended up staying late at a friends house with some other people. At one point we all drew one tarot card, mine was 8 of cups. It seemed to coincide with how my life was playing out at the time. I also happened to be looking for a title for the record.

Let’s talk Baltimore. You’ve been active for some time, maintained through its cycles. What is your current impression of Baltimore? And what do you see on the horizon?

The art and music scene have definitely gone through several movements since I moved here in 2007. Just like any city that harbors a large number of creative types there is constant flux. A lot of people I know are moving out to the West Coast, and Brooklyn, all over really. But there are many who stay and are invested in keeping the scene moving forward. It doesn’t operate the same as say when Whartscape was still a thing. That core solidarity has become more dispersed and there are more divisions within the scene at large, but also more diversity. Warehouse culture still exists but is less prevalent than it once was and caters more to dance parties and club nights, new places like the Crown and various small galleries have become the prime locations for live music, and performance art around the city. There is always new blood coming in, and people are more forward thinking I guess you could say, issues of gender and racial equality are heavy on everyone’s minds, especially after the riots. It’s definitely more volatile out on the streets, but rent is still cheap. It’s really hard to predict how things are going to pan out in 2016 and onward, but I’m hoping for some positive change.

Benny Boeldt’s 8 of Cups is available on Spotify and on LP via Carpark.