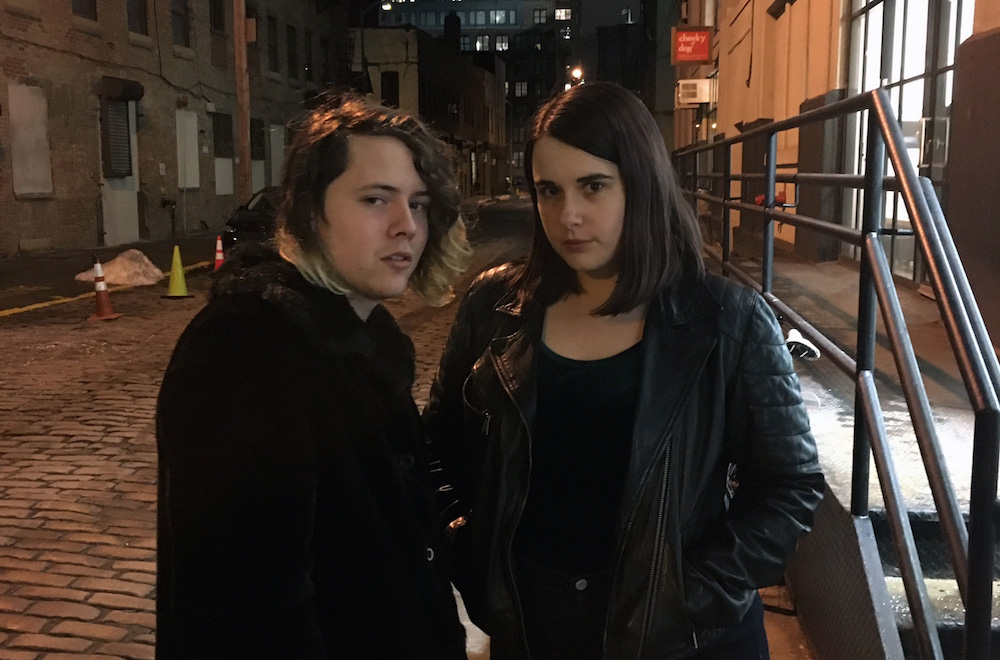 Drug Pizza is a totally appropriate name for a bunch of kids fooling around on guitars in a garage—or a college radio station, which was the reality up until last spring—but the NYC four-piece have a sound that counters the juvenility of their name. It’s obvious that they’re having fun with it—they’ve named the new EP Return To Content Mountain—but there’s been something stark and serious in their brand of punk rock since the release of their debut EP in 2013, when they were in college together.

On the guitar-powered anthems of their forthcoming EP, Drug Pizza are indulging darker thoughts, pairing them with Dirty Dancing references to take the edge off. Listening to Drug Pizza is affecting like watching an ’80s romcom is—they’ve pulled out all the stops, and what they’re telling us is halfway corny but also deeply empathetic and resonant, for better or worse. Over drastic tonal shifts and sweeping solos, they delve into loaded matters of the heart unapologetically.

Madeline Steinberg’s voice may be saccharine, but her exasperation is hardly veiled as she opens the record over Zoe Camp’s steadying bassline: “This one time you asked me if we could go for a ride / this one time I told you you’re not on my mind.” It sounds like a clear rejection letter, but ambivalence seeps into her voice, and soon she’s telling the other party to “take me away” over Miguel Gallego’s soft supporting vocals. The lyrics are simple line by line, but there’s nuance across each song that imparts a lingering apprehension, and shifts in attitude come fast. “Don’t you want to know where your best friends go when they sneak out?” Gallego offers in “Summer Is Forgetting”, with the bleak insinuation that the addressee is already resigned to being alone and stoned for the season. For being so emotionally taunting, it’s sure fun as hell to listen to—in tandem, Steinberg’s lilting soprano and Gallego’s gritty drawl make a disarming pair. The final track channels early PJ Harvey in its minor-key melodrama, opening out into a searing punk rock reprise as fuzz overtakes the ringing arpeggios and Henry Van Dusen’s once-subdued drums crash over it all. “What did you do? What did you choose?” the two interrogate in menacing unison, before a final—and startling—question, “Who am I to disapprove?”

Return To Content Mountain will be out March 18 on Art Is Hard in the UK and March 25 on Negative Fun in the US. You can stream it in its entirety below, and read on for a conversation with Drug Pizza about memes, college radio, and making the EP.

This is your second EP since 2013’s self-titled, which you released yourselves. What’s changed in the past three years?

Miguel Gallego: These songs are very old—we wrote most of them not too long after we released the first EP, that fall. Then in spring Madeline went abroad and Drug Pizza kind of got put on hold for the rest of the school year. That summer we basically finished writing and recorded the EP over a long period of time our senior year, between Fall 2014 and Spring 2015. So this EP is kind of a document of a time in our lives that’s pretty different from our lives now.

Madeline Steinberg: Miguel summed up the timeline pretty well. Since I was gone and then three of us were seniors in college and swamped with homework and existential anxiety, it took us a while to get this new EP to where we wanted it. A lot has happened since we started working on these songs—first Zoe graduated, and then the rest of us joined her in the Real World. So pretty much everything has changed since 2013. Except that we’re all still pals. Aw.

MG: Yes, it’s con-tent. I love the abstraction of basically anything you encounter and engage with into the word “content.” I’d like to see a day when you refer to a interactions you have with friends and loved ones as content. I guess that’s already happening given that most my text interactions are meme exchanges. If this process continues we’ll eventually discover that our bodies are, in fact, an amalgamation of content. Our very subjectivity will become indistinguishable from the constant generation and distribution of content. When we speak of the “Return to Content Mountain,” I’m imagining a pilgrimage of people desperately returning to some sacred mountain, where content all began—maybe the president has outlawed memes. Something like Moses being given the ten commandments at Mount Sinai, except it was the ur-meme which the Firmament did cast before humankind. That’s why we asked Disa Wallander to adapt Goya’s “A Pilgrimage to San Isidro” for the album cover. It’s also sort of a TV On the Radio reference, but that’s not really important—Madeline didn’t realize it was a reference to their album until I told her.

Zoe Camp: Memes and internet tropes comprise today’s cultural currency, and no matter how many of them we generate, there’s always this desire for more and more. It’s this hunger—and we know it’s stupid but we’re drawn to it nevertheless, out of a mix of nostalgia and a desire to consume funny, meaningless shit. We always go back to content mountain.

MS: It’s true—I didn’t realize it was that reference. I just like phrases structured as such: “[Verb] to [Adjective] Mountain.” At the time we thought of the name, our friend’s radio show was called Return to Friend Mountain, which I was laughing to myself about a lot. And then I got thinking about how we hadn’t produced any new content in a while, so our next record would be…a return to the Content Mountain, the physical manifestation of that strange aspiration everyone seems to have these days to constantly produce and consume culture on the internet.

In spite of your jokey name some of these songs get pretty heavy, content-wise. A good portion record seems to deal with an ambivalence that’s felt surrounding intimate relationships. What were some of the factors behind your writing?

MS: I’ve always liked using music as a way to convey my darker thoughts, especially under the guise of things like a goofy name or a nice-sounding song. I think Miguel and I both conceptualized Drug Pizza as a pretty dark band from the start, despite the name. When we work on lyrics together I usually think about how far we can take it—how much intense or negative energy we can squeeze into these rock’n’roll tunes. The themes on the EP don’t necessarily reflect my personal outlook, except for “Go Away”—that one was sincere but I don’t remember about whom.

MG: I think Madeline summed it up real good. There’s a vindictiveness and fear of intimacy in these songs that I don’t think any of us would ever allow ourselves to indulge in real life but which I think does lurk somewhere in the back of my mind. Drug Pizza make it possible to dissociate those gnarly thought processes from myself and contain them in a pop song and a persona.

Madeline and Miguel, your vocals play so well off each other. Any duos you’ve been influenced by, or just artists in general you’ve taken your cues from?

MG: I don’t think we talked too much about how we approached singing with each other. We just both have our own styles and they happened to work well together. I guess we kinda fall into the Frank Black / Kim Deal paradigm… The Pixies kinda snuck their way into our sound.

MS: Miguel said it first, but The Pixies. Yes. I was also way into Los Campesinos! in high school, so their vocal arrangements certainly influenced me a lot when I was dreaming about starting a band. Groups like LC! and Pixies definitely led me to try a lot of stuff with my vocals—and in the way I work with Miguel’s vocals—that pushed the limits of what I grew up understanding as “good” singing.

You formed Drug Pizza while you all were working at a college radio station together. What kind of impact did that have on the band?

MS: I don’t know about how it impacted us as a band, but on me as a person and a musician working at WBAR had a huge impact. It allowed me to find a voice within a community of people with a variety of tastes but a common interest in independent thought and DIY ethics, and to discover a crazy amount of new and old music that influenced me tremendously. Plus we used to practice (and recorded our first EP) in the studio, surrounded by the station’s vast CD library, which I always found to be a really inspiring place to play. How can you not wanna rock out when you have a wall of great music staring down at you?

You get “garage rock” a lot, but I see this record establishing a cleaner, crisper sound than your last. Anything you think is a more accurate description these days?

MS: I have trouble describing us to people. I usually say we’re a punk band, but that we lean more towards the pop side. But not pop-punk. It’s like we’re a punk band in pop band’s body. Or a pop band in a punk band’s body? Or I just say DIY punk, since that can refer to a lot of different sounds, but encompasses our approach to music-making.

MG: I think we’re a band that really cares about melody. I think this new material is a lot cleaner, crisper, and also, for the most part, pretty slow.