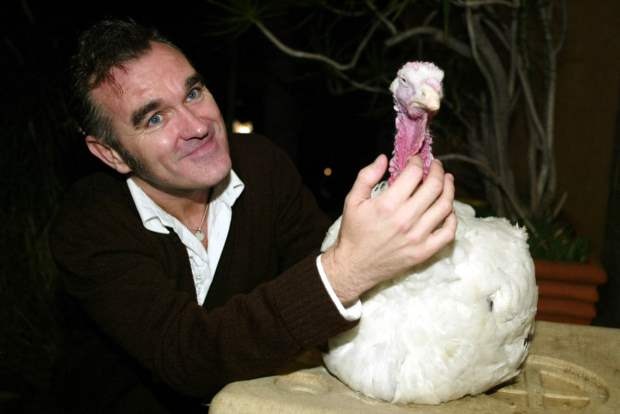 As we approach zero hour of Vegan Gate, we must reflect on the month in which Morrissey fought American depression, obesity, and AEG with his music and tremendous stoicism in pricktitude. Last month it felt as though Morrissey was being the English prick we love by placing the blame on his bandmates for the show cancelations in Flint, MI. What booking agent in their right mind would get on the phone with Flint, MI? It's the seventh largest city in Michgian with two major exports: Michael Moore and All American college athletes, both of which are forced to share their powerful tribulations stories of being raised in Flint in exchange for playing time. This is no place for Morrissey. It's likely Morrissey canceled the Flint date because he was on the phone with The Staples Center issuing demands of vegetarian-friendly meals and PETA booths at L.A. Live. He was busy saving our lives.

When you grow up, unflinching in an -ism, by the time that 50 years threshold is crossed nothing exists except what you believe. Raised vegetarian, stuck with it for 50 years, dies vegetarian and with fuggin' conviction, the type of solipsist conviction in which even entertaining a bit of compassion for alternate lifestyles is like being asked to pass through the eye of the needle. We are living in Morrissey's world now and he's created us as his opposition that he must love too much in order to save us, but more importantly strengthen his beliefs so that he may depart with peace of mind.

Tonight the doors of the Staples Center will open to whoever shilled out the bloated base fee along with inexplicable handling fees and service charges. Morrissey moved mountains, most notably Golden Arches, to perform tonight, but he cannot prevent digested meat from entering his show. If Impose as a staff makes regular lunch trips to a taco truck for beef burritos and still enjoys the occasional spin of Meat Is Murder in the office, there must be others who can do both and those others might care enough to pay for his show.

What if in his 53 years of vegetarianism he has developed a sixth sense for chewed burger? Will his animal cruelty telepathy kick in? Will an eagle perch on his shoulder minutes before his set and whisper in his ear that it spied several attendees eating chicken wings at the ESPN Zone? We ask because we don't think he'll perform. It's Morrissey, for chrissakes. He's fragile from a lifetime without protien and spent the past week battling Jimmy Kimmel and the animal serial killers of television's Duck Dynasty. How could we ask him to perform at a time like this when Kimmel is mocking his yuppie beliefs alongside men who profit from the deaths of birds, and surely it's still possible to throw in a mentioning of Sandy Hook as a reason, right? As a vegetarian Morrissey was hurt by that too.

Clinical studies show that Morrissey is hurt by a lot, but it's out of caring for us. Studies also show that while he cares about vegetarianism, gun control, obesity, and depression, he will still allow The Staples Center to serve the depressant beverage manufactured by Anheuser-Busch.

Bauuer vs people of Harlem, “(That's a disgrace to the) Harlem Shake” single (Stay out of this Azealia Banks Records)

The Record Industry, .3 Percent Sales Growth – now, give Steven Tyler some money for blow (10 other ways to spend the extra money)

Atoms For Peace, only cool when Thom Yorke is dancing (Youtube)

Death Grips, No Love from Sony Youtube Account (deleting Death Grips from your life is so last year)

Rock n Roll Fantasy Camp, pay to have Brian Wilson scrutinize your kazoo playing (just like the Pet Sounds Sessions) and Jeff Beck be one of the 100 Greatest Guitarists of All-Time while you're just Gary from Kansas City (Make A Wish Foundation)

Zubaz-Redux, ADIDAS and the NCAA have been reading our critical essays on 90s obsessions (@therealMarchMadness)