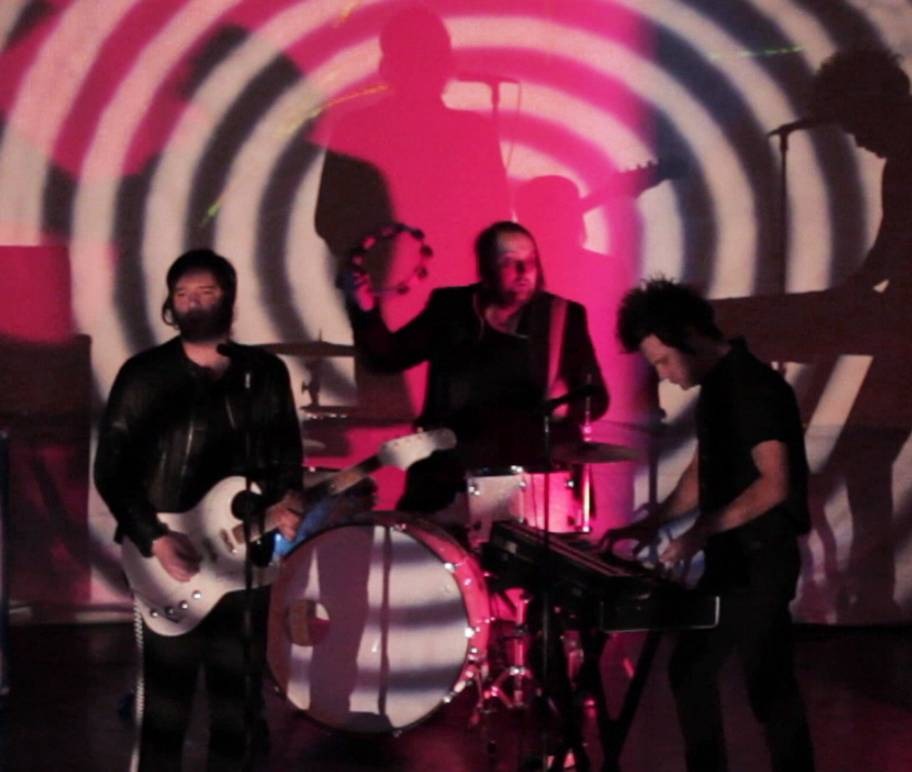 Bound together from playing in Adam Franklin's Bolts of Melody; Matt Sumrow of The Comas, Dean and Britta, Ambulance LTD along with Mikey Jones of The Big Sleep, Snowden and now Swervedriver, wield a dream-weapon of their own as Heaven. Premiering the title track from their forthcoming Goodnight Records LP Telepathic Love, the Brooklyn group keeps a heavy duty ever burning electric flange waving to keep the opening flag hoist of “Colors In The Whites Of Your Eyes” sailing high in the upper altitudes.

Matt and Mikey set out here on a heavenly quest for a reconciled connaissance between the dark and the light, redemption and perdition, comings, goings, and extra sensory conveyances. “I see the ugly and the beautiful, I don't know that I'm just trying to figure it out”, sorting out the significance of opposites and complicated sentiments further in the next line of, “a thousand weddings, a thousand funerals, with your white dress on and your black heart”. Upon the acknowledgement of these coexisting paradoxes, “Telepathic Love” kicks into full form with toy bells and guitars like wintertime holidays celebrated with Fourth of July fireworks and empowered flair. The futile attempts at figuring out what love is gets met with the enormity of something they can't be without. Matt and Mikey take their large empathetic affections to the bridge with the realization that the only medium to show their love is through the form of telekinesis, as Fan-Tan's Ryan Lee Dunlap strikes each Jaymar piano key with truth.

Heaven's Matt Sumrow talked to us about the business of making celestial sounds, the fanaticism and formal connections to Swervedriver and more.

How did you both come around to starting the dream craft vehicle, Heaven?

Mikey and I had met playing with other projects and just clicked musically. We decided to start our own band to realize our own sound and vision, and step out from behind the other songwriters and artists we made a name for ourselves backing.

As many artists and imprints have taken monikers named after blissful states (ala Heavenly Records, Nirvana, etc), what does the name Heaven mean for you guys?

We wanted a name that suggested something big, something larger than ourselves. Heaven works in that way I guess; It suggests something otherworldly, something beyond the here and now. Mikey might have other reasons for deciding on it as a name though ha…anyways, that's what is means to me. I guess when it comes down to it though, its just a band name. You have to decide on something!

How was it to work with Adam Franklin who had produced heroes of yours like Swervedriver?

Working with Adam has been amazing. I grew up on Swervedriver records, and his guitar playing is ingrained in my musically sensibility really. Playing a jazzmaster on stage along side him is something I never could have imagined back then. I have learned a lot and Mikey is the new drummer of Swervedriver! Definitely full circle for us.

How do you feel about how that experience affected your sound?

The Swervedriver/Adam Franklin sound has been influential to me from day one. The way they build a tune, use a riff, and keep the engine chugging along are the things of legend. Swervedriver is pure rock and roll alchemy. If we can glean any of that magic in our project we'll be very lucky.

Tell us about the infectious telepathic properties and qualities that went into making “Telepathic Love”.

The song “Telepathic Love” was the song that got the idea of Heaven, and this record, rolling in the first place. It is our version of a sixties girl group, Shangri-Las, Ronettes type of thing. Written first as a bedroom acoustic song, it took shape in the studio when we added a tremolo drone, fuzz guitar hits, and accents by the Jaymar toy piano in the choruses. It is really just a love song, a conversation with someone you love. In dealing with someone you care about, I feel like you have these conversations, whether actually with them, with yourself, or telepathically.

And is “Telepathic Love” real, or a myth?

Its real….. Just close your eyes!