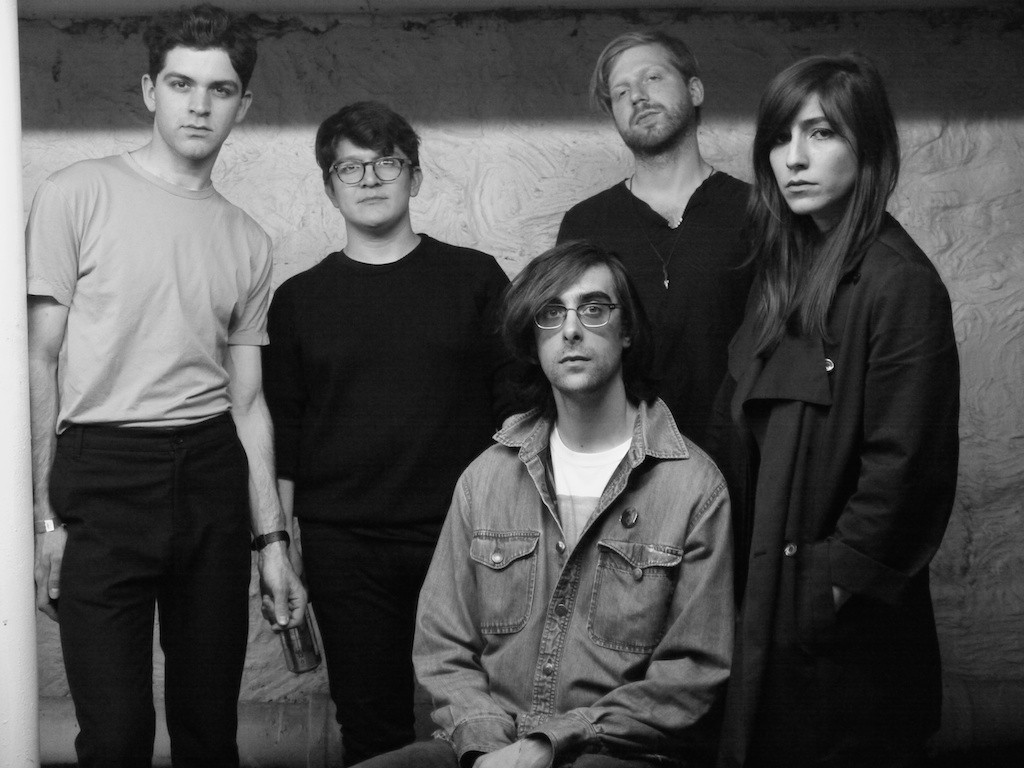 “Amanda Berry” is the horrifying first single from Heaven’s Gate’s upcoming record for Dull Tools, Woman At Night. Alternately nausea-inducing and empowering, the song is mostly sung from the perspective of Amanda Berry, one of three Cleveland women kidnapped, held hostage, and repeatedly sexually assaulted by Ariel Castro in the same house from 2002-2013. “I realize the lyrics could be triggering and I’ve often felt conflicted about using the subject matter at all…” says Jess Paps, the band’s singer, who also works as a social worker for women with severe mental illnesses. “Ultimately, as the three women started releasing books, doing interviews, and telling their stories, I felt more comfortable with the decision to proceed.”

In the nearly two years since Amanda Berry kicked her way out of the house through the front door, the terror that the three women faced and fought has illuminated a great deal: the ways police de-prioritize poor neighborhoods, the ways the media and the police fail when it comes to crimes against women, the connections between capitalism and a culture of gender-based violence. “The case resonated with me so much, not only because it’s many women’s worst nightmare, but because it’s a remarkable story that illustrates the polarity of total depravity against resiliency and survival,” says Paps.

The song is four minutes of expressive noise punk; a nightmarish rendering that shifts from creepily calm to chaotic, pairing total despair with total strength. It peaks when a wall of disoriented guitar riffs give way to the chorus, Paps’s muscular, monotone shout of “Oh, I’m alive / I’m Amanda Berry / I’m alive,” words drawn straight from Berry’s widely-publicized 911 call, made from a neighbor’s house after her escape. Halfway through, “Amanda Berry” deconstructs into sheer terror, overtaken by inaudible words and heavy breathes, audibly on the brink of collapse, before it bursts into an aggressive wall of noise—”Wasting for you man/ Wasting for you.”

Heaven’s Gate’s Woman At Night will be available this summer on Dull Tools. We talked to the band about “Amanda Berry”, the album’s title, and more.

Can you explain the song “Amanda Berry”?

“Amanda Berry” is song is about the abduction, rape, ten year captivity, and escape case of Amanda Berry, Michele Knight and Gina Dejesus in Cleveland Ohio (spanning 2002-2013). Amanda Berry also gave birth to a daughter during this ten years who was six years old when they escaped the house by kicking out a storm door. The lyrics or voice changes frequently between the perpetrator, the women, and myself. The lyrics involve specific details of the case.

The chorus was inspired by Amanda Berry’s much-publicized, publicly-released 911 call, which is one of the most haunting, raw pieces of tape I’ve ever heard, and felt strange and invasive hearing — her speaking to the outside world for the first time in ten years, the moment after she frees herself. Singing “I’m alive, I’m alive” in the chorus, juxtaposed against the verses, feels something like a battle cry or a fuck-you.

I realize the lyrics could be triggering and I’ve often felt conflicted about using the subject matter at all. We talked about it as a band, and fell on either side at times. Ultimately, as the three women started releasing books, doing interviews, and telling their stories I felt more comfortable with the decision to proceed. The case resonated with me so much, not only because it’s many women’s worst nightmare, but  because it’s a remarkable story that illustrates the polarity of total depravity against resiliency and survival. I think the impulse to write about myself and other women on this record was probably an attempt to process and master these circumstances and stories of violence against women, and to take back some power and control.

What were some musical and non-musical influences while making this record?

Jess: It took a few years to find my voice in the band and experiment with the type of vocals I always wanted to produce; combining soft melodies, monotonic/haunting vocals and screaming. You can scream underwater. You can scream in a car with the doors shut. I used to scream riding on my Dad’s tractor because it was so loud and I thought no one could hear me. Learning to, or opening myself up to, screaming while singing was a fork-in-the-road, a powerful transition for me. I have always been inspired by female bands from the Northwest from late 80’s and 90’s (early Hole, Babes In Toyland, Bikini Kill), punk singers from California in the early 80’s like X and Alice Bag Band, and bands form England like Crass and the Raincoats. I’m in love and have been for a few years with someone I respect musically and who encourages me constantly to do whatever i want, so that’s a huge influence.

Mike Sheffield: Being in a band can often be limiting when you are working within a system. I think film has been a pretty big influence, definitely for Jess and I. Just because you have a style or methodology doesn’t mean you have to create the same thing every time. This record is probably our most diverse.

Jess: Outside of Heaven’s Gate we work full time and work on various projects and chill with our cats and the people we love. I’m a social worker, working with women with severe mental illness. Mike is an editor, Michael is in law school, Jack does art and furniture design, and Alex is a freelance theatrical technician. We’ve been a band and close friends since 2011, so there’s been a lot of storms we’ve weathered with one another.

The impulse to write about myself and other women on this record was probably an attempt to process and master these circumstances and stories of violence against women, and to take back some power and control.

What was the trajectory of making the record like?

Jess: We’d been writing and playing the songs on Woman at Night for awhile with our old drummer Patrick Stankard, who we were grateful to play with for as long as we did. We spent some time playing with various drummers after he left the band and did some touring. We knew we wanted to do the record with Justin Frye who we all respect and trust, in his studio on Meserole in Bushwick. Because we were between drummers at the time, Mike Sheffield actually drummed on the Woman at Night recordings. It was the first time he ever played the songs I think, so they are a bit more unhinged. The songs were also recorded much faster, with little emphasis on trying to perfect takes. We went with a more natural approach this record, keeping mistakes, often with the sound of bands practicing in the background. I recorded most all of the vocals in one or two takes in Justin’s bedroom late at night, literally screaming while his roommate was trying to sleep. But this process, more than anything, is just the reality of our environment or situation as a band: playing in cramped quarters with poor soundproofing, with little to no budget, next to a rehearsing Bar Mitzvah band. This is the third record Heaven’s Gate has done. We didn’t over think anything, we followed our instincts, and we made a record that sounds like how we sound when we play live.

Why did you decide to title it Woman at Night?

Jess: This record was all about rejecting the tendency to overthink things, and trusting the the first and purest idea, which was Woman at Night. At times I wondered if the title was too unimaginative but I thought, you know, James Joyce and DH Lawrence did that shit. Most all of the songs on the record are about women (fictional or real) and experiences specific to night. That’s when I play music, that’s when I make things, that is the time I feel vulnerable and animated and, yeah, sometimes frightened. Many of the ideas were related to danger and safety, creativity, anxiety, learning to take up space, and control. There’s a lot of history in the ritual for me — the curtain of night falls and you’re on your floor, cutting things up and taping them back together.

What general ideas were you trying to explore on the songs?

Jess: I’m not entirely [sure], and that’s okay, because confusion or contradictions are realistic and interesting. Looking back now it’s like, “I’m working a job for 8 years where I see very fucked up things all day (extreme poverty, trauma, people I know are dying often) and I go straight to band practice in this old, cold pharmaceutical plant module and scream for a few hours and then I walk home as fast as I can with my keys in my fist in case anyone attacks me.” Hyper vigilance is a big theme on this record. But there’s lot of juxtaposition too, thematically and physically, with the art. There’s a constant balancing of softness and hardness. Anything I’m writing about is going to touch on mental health issues/illness, attachment, personal content.

The landscape in music has been changing over the past few years, by women and bands that are playing now, and it feels like there’s a much bigger space for topics that are very real to me and my friends (like sexual assault, discrimination, street harassment) as opposed to how things felt five years ago.