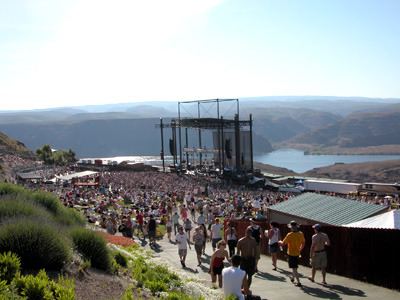 For all you haggard, burned out Coachellans crawling out from the deserts outside of LA today- can't wait for the next one, right? Good! Northern Washington's got an equally devastating lineup in only three and a half weeks.

SASQUATCH!, a massive two day music festival put on by the former Clear Channel tools at Live Nation, have pulled together a lineup that apes Coachella's in some respects while whipping out a few guns of its own.

…So while popular bands are increasingly doing the festival circuit, it's not often in lieu of touring, so there's no big panic alarms in my mind about the homogenization of live performance into massive pre-fab corporate events reaping millions off our shared tastes for over-stimulation and name brand recognition. That being said, I find it hard to believe that Sasquatch! will remain Live Nation's only incision into the North American circuit. Coachella is run by Goldenvoice, a subsidiary of one of its main competitors, AEG Live. Rumors continue to swirl across message boards that Bonnaroo will eventually be bought up en masse by MTV, and if not MTV, then why not Live Nation? Virgin jumped into the ring with Baltimore's “Virgin Fest” with a first year profit of $3.5 million. And the vestiges of Lollapalooza's slacker image were “retooled“, that is, bought by Capital Sports Entertainment, a corporate sports and events planning company, to repackage its legacy as a weekend festival.

Sasquatch will be held at The Gorge in George Washington on Saturday, May 26 and Sunday, May 27. Tickets are $65.00 per day. Or $125 for “Premier Campers.” Look up Ticket Master yourself. Have fun!

PrevPreviousFrom Hot Heat to Wolf Parades to the Moon, DeCaro's declaration of independence…
NextRalph “Soul” Jackson on the up, played PonderosaNext