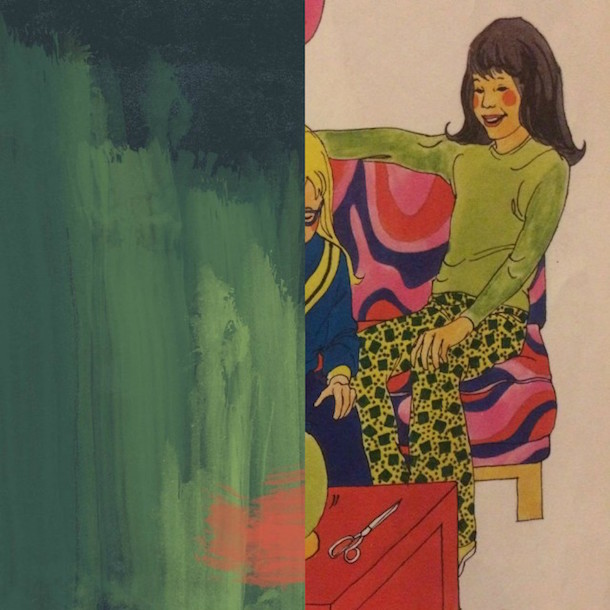 The meeting of one slightly seasoned Tallahassee band and one fledgling, The Most Beautiful Place on Earth / Commercial Music is a perfect instance of mutual benefit. Subdued bedroom pop act Naps are following their debut EP You Will Live in a Cool Box with the fresh new energy of Yikes for complement. The two four-pieces’ sounds aren’t all that similar superficially, but each serves as the other’s springboard—it’s the kind of record you turn to for its standout energy foremost. It’s loud, a ring and buzz hanging around from start to finish.

Naps takes this space to wander down a familiar (though no less potent) rabbit hole of sour emotions, but interspersed here are some biting observations—like on their recently released single, where in between conveying the drag of three or four days without speaking Ryan Stanley utters chillingly, “A generation propped up on pills / we ain’t got social skills.” There’s a proliferation of drum machine and electronic loops here that the first EP’s fuzzy strum-based sound barely anticipated, and even some autotune in a bold and heartwrenching rendition of PC Music producer Danny L Harle’s “Aquarius”. The circling repetition that Naps employs here doesn’t bore—rather, it has the effect of drawing out the emotional impact, pulling us into a trance.

And then Yikes pulls us out with the saucy ruckus of Commercial Music. Naps’ new tendency toward electronics-heavy arrangements makes Yikes’ raw guitar rock seem like plain rootsy Americana, though it’s way too noisy to fit that description comfortably. They inject some volume into their take on the Slanted and Enchanted classic, pulling in huge springing guitars and feedback and yelling like the whole structure’s about to collapse (included as a bonus is a perplexed rehashing of the lyrics at the end). Yikes build up to their peaks exceptionally well before tumbling back down. Meanwhile their lyrics are, like Stephen Malkmus’, tricky, so that their most straightforward moments cut through like a knife: the confrontational “Why’d you say that / why’d you stop?” before a lengthy meltdown on “Thought You’d Say”. Taken with Naps’ blooming first half, this tape properly kindles our expectations—here’s to hoping there’s plenty more from the Florida acts soon.

The Most Beautiful Place on Earth and Commercial Music are out now as a split cassette on It Takes Time Records and Viridian Sounds, and you can listen to the whole thing below. Scroll down for Naps’ upcoming east coast tour dates.