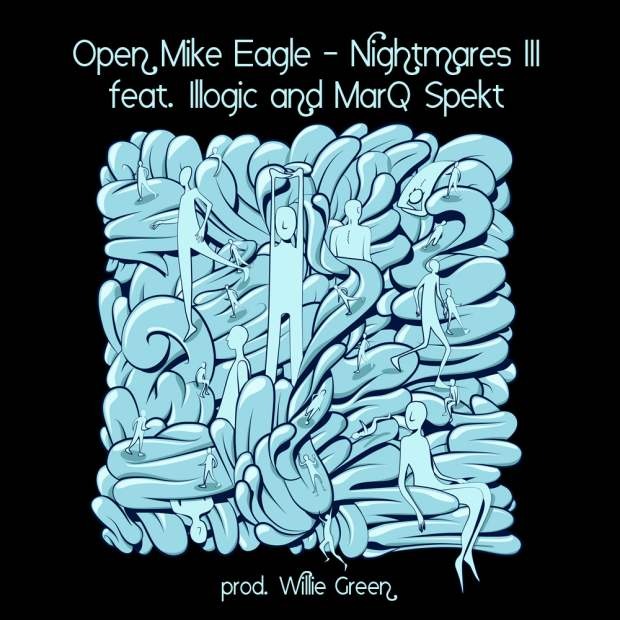 Open Mike Eagle cannot shake the night terrors. He's remixed the lead single from Rappers Will Die of Natural Causes for the third time, enlisting Illogic and MarQ Spekt to share their dream diaries as well. Produced by Willie Green, “Nightmares III” is littered with references foreign to the rap canon like Les Misérables, appropriations of Dig Dug as a slang for coitus and sympathy for Skrillex.

Both MarQ Spekt and Illogic (glad to see this name again) make the most of their guest appearances, but considering this is Open Mike Eagle's third outing in streaming his consciousness, it's expected that he offer the finest verse. Previous versions lamented that one cannot dress like Kanye, but go home to TV dinners and foreseeing a paper route future. On “Nightmares III” Mike is having old man visions of being in a rapper nursing home along with his Blowedian family. He's got black war vets guilting him into seeing Red Tails and young rappers challenging him, which he “ignores like a Facebook app request”. It's truly a nightmare scenario.

Our cable is out. Is there really a Rappers Wives show? We imagine it's something Ice T's lady, Coco, got started.

“Nightmares III” is will be the continuence of Open Mike's series of EPs he has planned for 2012. He'll also be releasing a new LP via Fake Four, Inc.