Getting the skinny on the Canned Ham 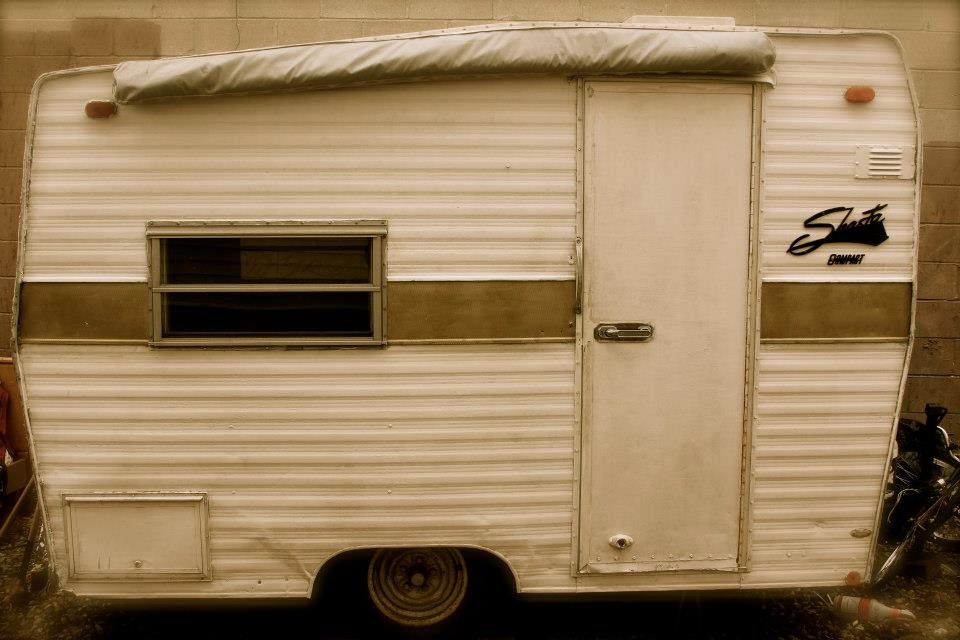 When Silent Barn closed the doors to its Queens venue and art space in September of 2011, it was unclear if there was ever to be another one. The massive robbery and building zone violations were a huge hit to the collective. Under two years later, however, Silent Barn has reemerged better than ever, in a new location, and with a host of different projects that include shows, arts installations, and an artist-in-residence program that is helping young artists in all genres to bolster their varying projects.

One project in particular that caught our eye is Katie McVeay's incredible Canned Ham, a 1972 trailer that stays parked in the yard of the venue in Bushwick to be rented like a hotel room. It can be rented out by anybody who's intrigued, or, as is encouraged, by bands who are touring and playing at Silent Barn on a donation basis. It's a quaint little spot and is in good hands with McVeay, who we got a chance to catch up with recently regarding the project.

Here's some of what she had to tell us. Visit the Canned Ham's Facebook page at this link and of course, check out all of Silent Barn's new projects here.

How did the idea for the Canned Ham originate?
I started traveling in December 2011, first on the Amtrak then in a Honda CRV with my boyfriend, Shane. We spent a lot of time on the side of mountains in the rain and thought “sure would be nice to have a roof.” We came back to Brooklyn and didn't quite know how to live in an apartment anymore, after a month and a half we decided to go back on the road. The Canned Ham seemed like the perfect project, something we could travel in, cook in, renovate as we traveled. We did a ton of research and found a guy selling his 1972 Shasta travel trailer in North Carolina so we went and picked it up! After a month living in it and traveling I got an email from Lucas saying I got residency at The Silent Barn, which was something that made living in one place worth it. I wasn't ready to get rid of it, the idea of being able to hook it to our car and leave is comforting so I proposed a stewdio project, The Canned Ham, and when it passed we parked it in the yard!

How many people does it sleep? And do you mind if there are more?
It sleeps 3 comfortably, I wouldn't mind if 4 people crashed in there but any more than that might be dangerous. There isn't a whole lot of room in there when the seating is converted to a bed. It's just like . . . a bed and kitchen in a box.

What's your ultimate vision for the Canned Ham?
The Canned Ham is one of a kind, I can't imagine there will ever be more than one on my plate. I'd like it to become a unique place where travelers, musicians, and artists can crash when they are passing through or touring here at The Silent Barn. It's affordable, unique, it's really cozy and cute. I remember traveling and not needing much but wanting the comforts of my own kitchen and bed and I'd like to share that with people. The idea is that people make a donation to stay, and artists who need a place to stay for a few days can crash for free if they can't afford to make a donation. It's also sort of a little social project in my head . . . seeing all the different types of people that pass through this crazy city.

Do you have anyone helping you out with the project?
Shane Suski is my significant other and creative partner; we've been working on it together since day one. I make him do all the dirty work and I do all the decorative and businessy stuff.

How much does it cost to stay in the camper?
It's a suggested $30/night donation which includes fresh linens, use of our bathrooms and showers as well as a stocked kitchen so you can prepare meals while you stay. If you're playing or doing an install at The Silent Barn you're welcome to email me and inquiry about free accommodations.

The Canned Ham is located at 603 Bushwick Avenue and can be reached at shhcannedham@gmail.com.