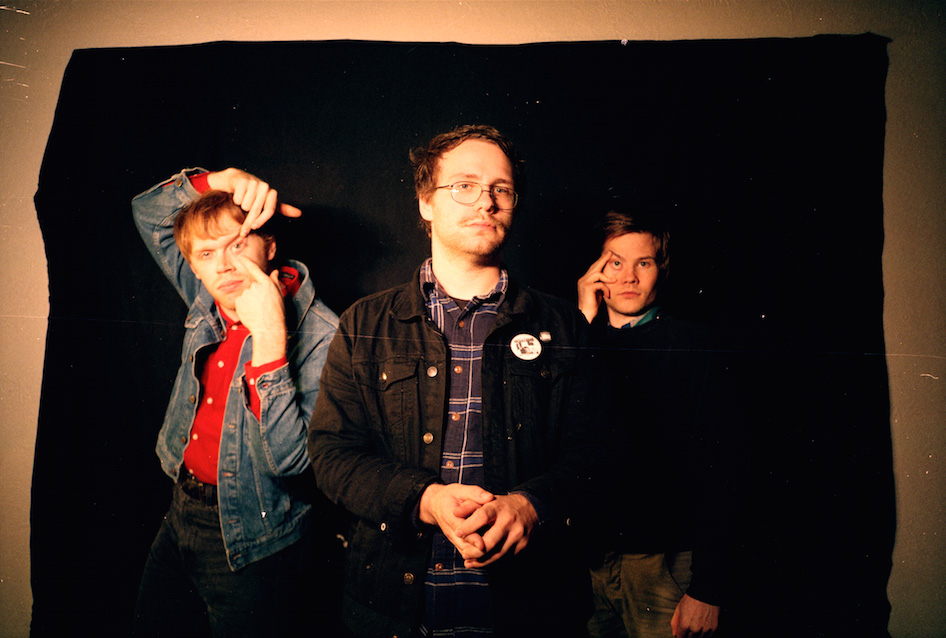 “I’m not so sure there were any musical goals involving this record—it was more like some kind of abstract finger painting.” So writes Amos Pitsch regarding The Blind Wink, Tenement‘s second full-length, originally released in 2011 via Cowabunga Records. The occasion of his reflection—which continues below, alongside input from the rest of the group—is The Blind Wink‘s upcoming reissue via Deranged Records. The album’s very first line goes, “In a traffic jam!” From there, collisions ensue. Affinities for The Replacements abut understandings of power-pop as reinvented by the Exploding Hearts, meaning hooks and sneers abound between melancholic piano laments. Last year’s Predatory Headlights was justly hailed as a bold and mighty statement—unafraid to indulge Tenement’s every disparate inclination, with such grace and confidence that it naturally coalesces—and, in hindsight, The Blind Wink anticipates that celebrated double-album in similarly arresting fashion. Although, as Pitsch argues, “Every record we make is a transitional record.”

Below, stream The Blind Wink and read the group’s reflection on its creative genesis, the primacy of full-length formats, and Tenement’s spiritual condition in 2011.

How has your view of this record changed since its release in 2011?

Jesse Ponkamo: I think it’s sort of an interesting release in that it was produced in a fit of desperation on one level, most certainly destined to never be properly released. However, that changed rather quickly after the addition of some material and in that year we were able to have two LPs on hand. We had been anticipating the release of Napalm Dream for almost two years prior at that point, which for us was a milestone. So having the two LPs both so varied [and] available barely abreast of each other was interesting.
Eric Mayer: I still love this record. I think at the time, it caught everybody off guard. Everybody knew Tenement as a “Punk Pop” band and then The Blind Wink comes out and has such odd ball songs- which I think forever cemented that… yah never know what you’re gonna get.

Amos Pitsch: I’m revisiting this record right now for the first time in a year or more. There were many recording decisions that were made that I might not make today. However, The Blind Wink was almost completely started and finished in one evening—the night before a West Coast tour in January of 2011. I’m not so sure there were any musical goals involving this record—it was more like some kind of abstract finger painting. We were very limited in time and the ideas were really spontaneous. The piano on “Medical Curiosity” was recorded with an old boom box on the same piano in the kitchen of BFG that we used for the Napalm Dream record and parts of Predatory Headlights. None of the microphone placement was labored over, and the mixing was done mostly on headphones. The guitar part on “Unreal” was recorded as an idea for Napalm Dream. We dug it up and wrote a song around it. “Hey, Soozie” was a demo for Napalm Dream. Yeah, everything was really haphazard. I’m still proud of the drum production on “Cage That Keeps You In”. Folks sometimes ask if that’s a drum machine. No, it’s not. I also still feel very satisfied with the overall mixes of “Hard to Say” and “Messy Endings…”

Does it strike you as a transitional record? If so, between what and what?

JP: I suppose so, in the sense that we were digesting a lot of new influences between the three of us.

EM: No. I think it was more having to do with not writing the same record over and over. But Amos is the primary songwriter and I can’t speak for him.

AP: Every record we make is a transitional record. It would be strange, in my mind, to be a musician and not constantly be transitioning from one thought process to another. Our greatest musical tools are our record collections. As they grow, the outlying borders of our musical minds move farther and farther out. You don’t know how many times I’ve been desperately broke and tempted to sell my record collection but hung onto it out of fear of my universe of music caving in. It’s a comfort to know that you can always return to your record shelves and open up a window to someone’s creative ideas and go for a little spin; take a little lesson at any time.

You released two full-lengths that year, but not another until Predatory Headlights, this year. There are plenty of titles in between, but I’m wondering if in the interim you were reassessing your approach to the album as a format?

JP: Not necessarily. A lot of the wait between releases or concurrence of releases had to do with the ability to release the material at the given time. Case in point being the time it took to release Napalm Dream and it appearing almost simultaneously as The Blind Wink as a vinyl record.

AP: No. I know exactly how I feel about the album. About the double album. About any format really. I spend so much time studying records—really studying them—their appearance, their sequencing, their sound. I think it’s an important idea really: the album. I hope that one day soon the music appreciating public finds the album as important as they once used to. It’s such a beautiful thing—a complete expression—compared to a single. The album, to me, is like walking past a house at night and peering into the front window while in motion. The double album SHOULD be the equivilent of walking up to that window, opening that mother up and sticking your head inside! It should give you the time and resources to discover what the artist is really about. And when I say “really about”, I mean every facet of their musical personality—perfection or professionalism be damned.

Care to contrast Predatory Headlights to The Blind Wink specifically?

AP: Almost complete opposites. Predatory Headlights was a very long record that took a very long time to make and was sonically labored over. The Blind Wink is a rather short record that was mostly written, recorded, and mixed in one night and really just slapped together with little to no goal in mind as far as the way we’d like it to end up sounding.

Anything else you’d like to add as far as the spiritual and musical climate of the group at the time The Blind Wink was recorded or released?

JP: I myself was having a really insane time in my life. I was struggling to keep it together at a university along with working roughly 30 hours a week, and since I’m a genius I had organized my academic schedule to take most of my chemistry course work all in one go. This release was recorded right after a semester where I had done particularly poorly and I didn’t know what the hell I was doing besides that the classes were hard, I had winter break, we were going on tour, we needed some new material to sell on tour, and I was being much more annoying than usual. In addition I don’t think we’d seen much of each other as a band since that summer in 2010. In addition I saw the Church of John Coltrane on the tour this release coincided with and at the time I was getting heavy into the jazz. Like a lot of things, it was a disappointment and I suppose it reinforced the thought that the ecstatic things in my mind don’t exist, necessarily, except as something fleeting.

EM: At the time of this record, I was still pretty green when it came to playing drums even though I probably had been playing for over 10 years. It opened my eyes to how drums should actually be played. I learned a lot about basic things as simple as keeping a steady tempo.
AP: Though we had been avid listeners of musics that lay outside the realm of rock ‘n roll for many years already, we had never really tried applying those musical ideas to our own creative output until this record. Specifically, at the end of “Hard To Say”, the melodic ideas of the song begin to fall apart, and it leads way to some disjointed percussive sounds that maybe represent our interest in John Cage or Edgard Varese. The stark contrast in the dry, loud, unaffected vocals in “Medical Curiosity” compared to its far-away, warbly, dream-like backing track sounds to me in hindsight like a hint of our interest in Serge Gainsbourg or early 1970s English folk music. It was a period of discovery—of how to use these influences as our own—while still staying loyal to a punk aesthetic and sound mostly.