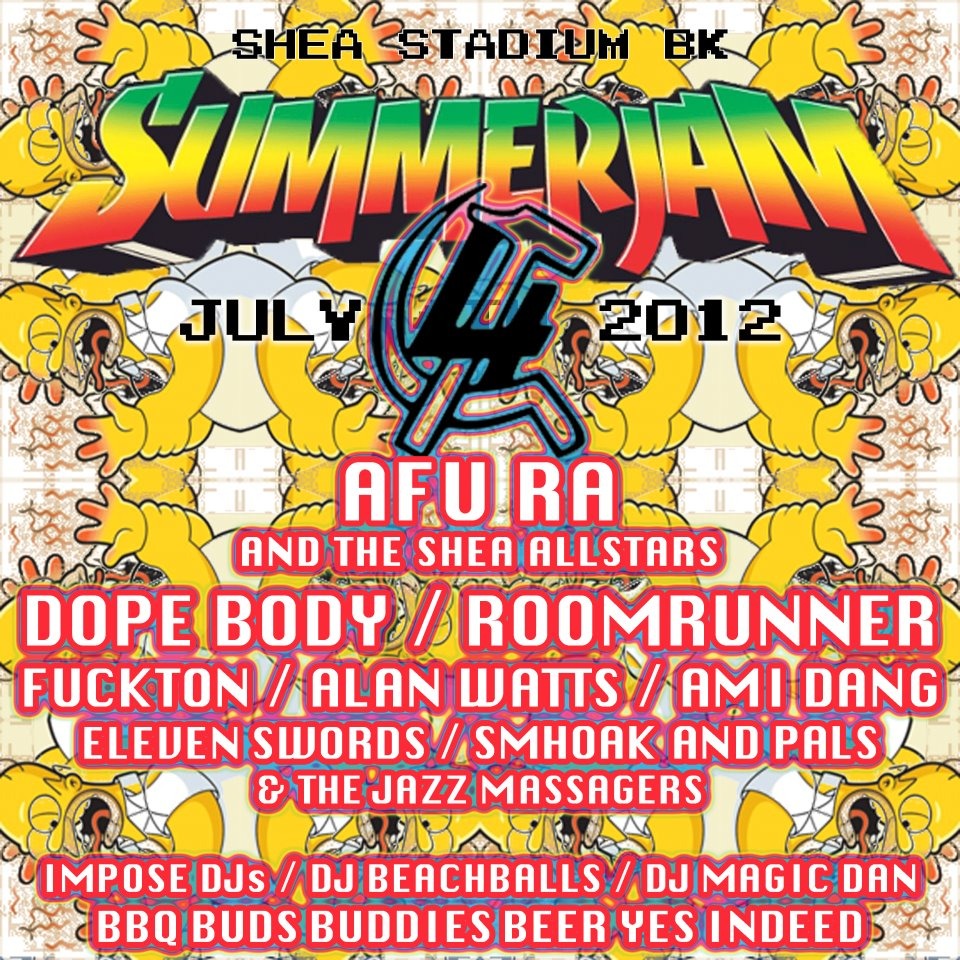 Details for winning tickets below.

The Hot 97 Summerjam might have had a lot of drama this year, what with Nicki Minaj not being respected and all that nonsense (always remember: no one stupid makes millions of dollars, especially if they are tricky, hyper rap divas) but the REAL SUMMERJAM ACTION is at Shea Stadium on July 4. The annual revelry has become legendary: a show with a million incredible bands, BBQ, a lovely balcony where you can watch the random Bushwick Fireworks, and a dance party that gets really real. This year, the lineup is TOP NOTCH and unbelievable:

Let's talk about headliner AFU-RA first. If you are a true New Yorker (and we know the heads involved with Shea Stadium are this in spades) then you know Afu-Ra from his time in Gang Starr and his classic solo record Body of the Life Force and Life Force Radio. Afu-Ra will be appearing with the SHEA STADIUM ALL-STARS, a super-group made up of denizens of the venue, including members of the So So Glos, Titus Andronicus, and probably also Greg Fox (we're just guessing here).

Next up are two of our favorite Baltimore frontrunners: DOPE BODY and ROOMRUNNER. Dope Body's new record Natural History was recently released on Drag City to exteme critical acclaim and we're proud to see our beloved destroyers get shirtless and sweaty nationwide. Roomrunner's self-titled on Fan Death has also garnered lots of attention; the former members of Double Dagger are basically where it's at right now if you are looking for bunge, the nouveau trash rock.

What can we say about FUCKTON other than that they are loud, sometimes wear masks, and completely obliterate every venue they are allowed to play. ALAN WATTS takes a smoother tack, embedding a drone in the floor of their heavy psychic warfare. AMI DANG, also from Baltimore, builds world rhythms into beautiful loops. ELEVEN SWORDS is the new project from Greg Fox (Guardian Alien, GDFX, Duh) and David Wightman (Extreme Animals). Who the hell knows what SMHOAK AND PALS will actually do: we've heard rumors about deadpan all-female re-enactments of the skits from famous hip hop records, but who really knows. And THE JAZZ MASSAGERS will get the night started with their trademark smoothness and smoothicity.

All this is topped off with the chocolate sauce that is DJs from IMPOSE MAGAZINE, including editor Ari Spool, columnists Luke Carrell and Maria Sherman, and photo editors with mega record collections Eric Phipps and Edwina Hay. DJ BEACHBALLS and DJ MAGIC DAN will also be hooking up them decks. Last but not least, Chopped Liver columnist Kevin Bruce will be manning the BBQ with a non-yuppie foodie crew. (Wanna help him?)

Basically, if you are gonna be in New York City for the 4th, this is the party to attend. It all starts at 4:20 at Shea Stadium, and only costs $10.

WIN TICKETS TODAY: Tweet at us @IMPOSE and tell us your favorite thing about America. Winner will be selected at random, at noon, on July 3.