Lee “Scratch” Perry showing up the kids with summer tour 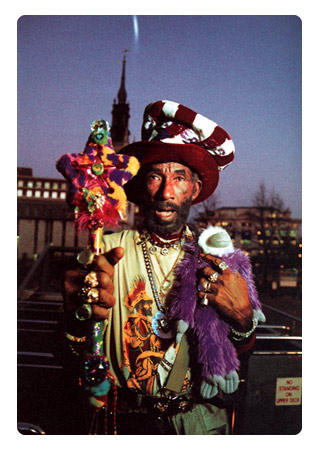 For the record, Lee “Scratch” Perry may have used record “scratches” in a 1973 single for Charlie Ace called “Cow Theory Skank,” but his “scratch” comes from a single he released, “Chicken Scratch”, in the early sixties. This seventy year old, long a legend, is touring the US with a new album out on Narnack, Panic in Babylon, that includes remixes by TV on the Radio & DJ Spooky.

Check out the DJ Spooky remix on his myspace page. His high-pitched, craggy old man voice is perhaps better for the spiritual brand of dub music he harps on there- preachy, creepy, it slithers along the top of the mix, screeching about evil and purity.

Credited as one of the first reggae producer to work with drum machines and phasers, and also one of the original innovators of dub, Perry was a workaholic producer through the seventies in his Black Ark studios, where he produced on average a song a day, before supposedly burning the thing down himself. (Others think it was just faulty electric wires, but why harsh the legend?)

His words on the matter:

“I did make a dread studio, and I said I’d make a righteous studio and a Godly studio. It was even too dread for me. I had to burn it down to get rid of that dread vibration. I forgot that I was a soul man. It was a dreadful equation. Too dreadful for me.”