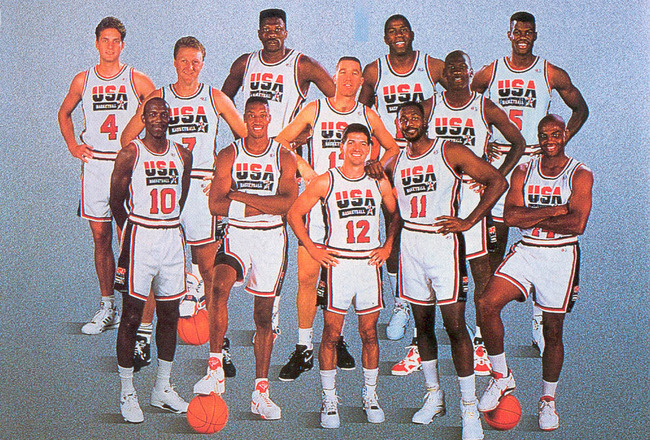 Here's why what I say about basketball matters: I've never met an NBA player, I've never had season tickets to any professional franchise, I never played any meaningful competitive ball and I don't even really know anyone who has done any of these things. I am a basketball alien; and yet, I've spent a fair portion of my existence on this earth hovering over statistics and various hoops minutia. It's almost like I'm in a satellite orbiting around the basketball planet, using bizarre scientific instruments to speculate and decipher the movements of players below without actually knowing anything apart from pure data. Wouldn't you find it interesting if some bench warmer for the Timberwolves spent most of his time talking about whether Jeff Tweedy was still using D'Addario extra-lights or had switched to Super Slinky mediums? No? Well, I would.

When I was home for the holidays this year, my dad surprised me with a few tapes of full games of The Dream Team in 1992. We watched their first televised contest against Cuba, which they won 136-57, prompting Cuba's head coach to explain “you can't cover the sun with your finger”. When I was twelve and watched these games live, the US squad may as well have been glowing with omniscience–they were invincible and vanquishing foes without breaking a sweat. It was never a question of would they win, but by how much. Twenty years later, what can The Dream Team tell us? What does it mean?

What is this guy doing here? Shaquille O'Neal and Isiah Thomas are to The Dream Team as “Strawberry Fields Forever” and “Penny Lane” are to Sgt. Pepper's Lonely Hearts Club Band. Sure, it was a turning point in the Beatles' career and one of the greatest albums ever, but imagine how amazing it would have been with “Strawberry Fields…” and/or “Penny Lane” (which were recorded during the same sessions and originally intended to be included) were on there somewhere. Similarly, imagine a Dream Team with the most dominant big man of the modern era on the end of the bench, instead of Laettner (I'll resist comparing Laettner to “Within You Without You” or “Fixing a Hole” because, frankly, I love both of those songs). In any case, the youngster kept his mouth shut and got some garbage time and something to tell his grandkids about other than that shot against Kentucky.

The Admiral was entering his absolute prime in 1992–super athletic, dominant defender and versatile offensive weapon. I attended a Naval Academy graduation ceremony in the early 1990's and Robinson was there, in full uniform, to watch his younger brother walk across the stage. Even from a distance he looked like a superhero. That's one of the magical things about basketball. These guys are HUGE and FAST and (sometimes) charismatic and just do amazing things. If an alien race landed on Earth and said, “Impress us. What can you guys do?”, your best bet would be to trot out guys like LeBron, Dwight and Blake Griffin and have them run and jump and dunk and shoot and pass. It's just mind boggling.

The other center for The Dream Team. I suppose the logic of choosing Laettner instead of Shaq is that you already had two veteran seven footers in Ewing and Robinson, and a forward with range would be more useful to stretch defenses. But seriously, The Dream Team was about hyperbole, not stretching defenses. But I digress. Ewing was also in his prime in 1992 and watching them dismantle Cuba, my dad said repeatedly, “Wow, I can't believe how athletic Ewing was in his prime!” It's a shame that Patrick's legacy will be tarnished by the end of his career, as his knees failed him and the sweat continued to flow. Who in the NBA now plays like Ewing? Roy Hibbert? Who is intimidated by Roy Hibbert? There is no corollary.

What can be said about Bird that hasn't already been said? I won't call him “Basketball Jesus” as some sportswriters have called him, because that strikes me as vaguely racist, but I will admit that there is something just so zen about him that it almost strikes me as mystical. Take a look at Larry Bird in the early 1990s and compare him to any of today's middle-tier, hyper-athletic forwards and say to yourself “this pudgy white guy with bad hair would have absolutely owned this guy”. It's like he made a deal with the devil. On The Dream Team, Bird was more in an “executive producer” role, along with Magic. He was very clearly past his prime and hobbled by a bad back, but still hustled, hit shots and made great passes. (Side note: Do you know how Bird destroyed his back? By repaving his mom's quarter-mile-long driveway the summer after they won the championship in '86. Think about that for a second. You're absolutely on top of the basketball world, a millionaire, and a massive celebrity, and you endeavor to do heavy manual labor the summer after one of the most grueling seasons of your career? That'd be like Springsteen dropping an amp on his hand helping bands load in at The Stone Pony the week after the Born In The USA tour. NONE MORE BLUE COLLAR. OK, maybe he is “Basketball Jesus”.)

The ultimate glue guy. The Al Kooper or Jim Keltner of the NBA, he makes everyone else better and the game easier. Can dominate without dominating the ball. Not as homely as I remembered, either.

Jordan on The Dream Team reminds me of Dylan playing with The Traveling Wilbury's. He didn't need to do it, and probably wouldn't have done it if George Harrison (Magic Johnson) hadn't twisted his arm, but probably had fun being just a guy in the band (on the team). Overall, Jordan was reliably brilliant in the 1992 Olympics, but I kept reminding myself every time he had the ball, “This guy basically straight dominated all of these other guys at some point in their career”. In the first quarter against Cuba he did this, which really got my Dad hooting and hollering.

1992 was peak Drexler, and he was a good fit on the team: an athletic swingman with solid shooting, ballhandling and defensive capabilities. Given the choice, though, I'd love to have seen Isiah Thomas in his place (he was allegedly kept off the team due to a personal rift with Jordan), simply because Isiah was a better player, and the team could have used some controversy.

Oh look, another heavily-muscled, impossibly agile big man who can shoot and pass! I mean, it was 1992, I was 12-years old growing up during the longest sustained period of economic growth in human history. America was uber-rich and getting uber-richer every day. And there on TV, my heroes, the NBA elite, were beating other countries by unheard of margins and with unheard of ease. Getting the gold was a foregone conclusion, we were bigger, better, had better smiles, and Manifest Destiny was on our side. Karl Malone, who Charles Barkley calls a “Black Redneck,” fit right in with his barrel chest and blue collar nickname.

The man who never sweats holds all sorts of NBA assist records, and had plenty of targets at which to whip precision passes. This guy is seriously boring, though, and let's be honest, Magic Johnson will always be the greatest point guard of the modern era.

The mayor of The Dream Team. He knew how to inspire mythology, even if it meant subtle revisionism–the Bird/Magic rivalry was legit but way overblown. They only met in the playoffs a few times, and played different positions. Bird himself will admit that Dr. J and the 76ers were bigger rivals early in his career and the Pistons later in his career. But I prefer my idols mythologized, not demystified–I'll take Hammer of the Gods over Dream Boogie any day of the week. So let's green light another Bird vs. Magic ESPN retrospective and reflect on Bird's strange anti-social behavior and bask in the glow of Earvin's blinding smile.

The closest thing to a role player on The Dream Team (Laettner notwithstanding), Mullin was there for his deadly outside shot and his mastery of the bounce pass. The bounce pass is a dying art, like quality tambourine playing.

I love Charles Barkley. He is probably the strangest player and personality of all time: a 6'5″ power forward who can run, jump, shoot and rebound like hell. Probably the most unfortunate of “Jordan's Victims”, a.k.a great players who were denied a championship by playing in MJ's era of dominance. I don't mind that Ewing and Malone don't have titles, because they always seemed to shrink at the huge moments; they didn't deserve it. But Barkley was all guts and really had it. He had the same grit and irrational confidence that Magic, Bird and Michael had, but maybe just some bad luck. By the time he landed on a decent team in Phoenix, his window was closing and Michael was happy to slam it shut. So in that spirit, I get a lot of joy out of watching Barkley dominate the 1992 Olympics as the Dream Team's leading scorer and most outspoken personality. Remember kids, before Barkley was slinging tacos and cell-phones, he was a pretty damned compelling basketball player.
***Next week: Part 2 of my Dream Team retrospective, including the secret origins of Death Dunk***
PrevPreviousNo Team Ever Won Wearing Teal
NextPreviewing the Conference ChampionshipsNext