No Team Ever Won Wearing Teal 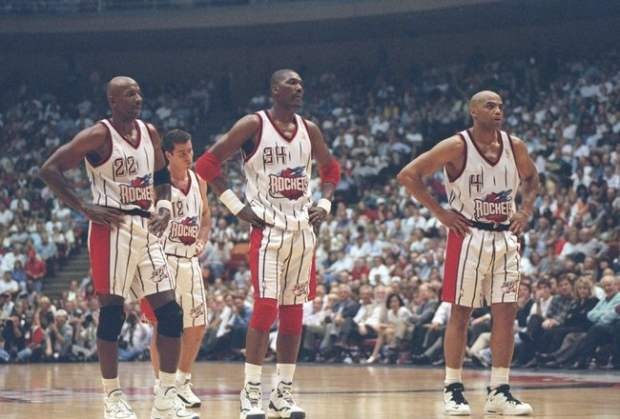 The Truth Behind Houston’s Relative Obscurity: Why the late 90s destroyed all the cool teams.

The Houston Rockets won back-to-back NBA championships in 1994 and 1995. From the 1976/77 season through those two championship teams, the Rockets missed the playoffs only 4 times. When the 1995/96 season began, “three-peat” was quickly ghosting from mouth to mouth in Houston. Unfortunately, Houston fell victim – as many professional teams did – to the second half of the decade. From 1995-2000, fans saw an incredible absence of logic and taste as their favorite NBA teams exchanged some of the most celebrated logos and jersey designs for low rent, overstated cartoons. We all had seemed to be floating in the pleasant excesses of the Clinton era, and much of the NBA, feeling the all around good vibes of America, shot for a reckless embracing of computer- aided illustrations rather than keep with the traditional logos.

Among the most notoriously redesigned teams, there was a curious trend of inserting a quite literal representation of the team name into the logo, which seems a great step backward; akin to 19th century political cartoons having every character, object, etc. labeled in script. The Detroit Pistons went from the simple red, blue, and white basketball logo to the short-lived flaming horsehead with exhaust pipes trailing off the two S’s. The Golden State Warriors quit their simple basketball and California silhouette logo for what looks like a man wearing one of those zentai suits holding a lightning bolt; we can assume this was their attempt to distance their team name from its original state as an appropriation of Native American culture. Like the previous two, the Houston Rockets abandoned their beautifully simple, slightly Southwest feeling logo for a complex and confused “rocket” – it looked like a slightly off crossbreed of a Microsoft Word clipart image and 1940s propaganda – propelling itself around a futuristic basketball. Along with these new logos, were their counterpart uniforms that needed words like teal, pinstripes, and lightning bolts to describe them.

You can imagine the frustration felt in the stands as Hakeem Olajuwan ran out onto the court for the first game of the 1995/96 season wearing some pinstriped kit looking like it was pulled from the cutting room floor of a Toy Story production. All seven feet and some odd inches of him covered in a gross combination of white and blue; the two colors most often associated with defeat in athletic competitions according to popular studies. Red – the symbol of anger, the aggressor, the victor – had been relegated to showing up only on the jersey’s trim. The collective dream of that third championship trophy held by the city of Houston audibly shattered in that brief silence as the ball reached its highest point during the opening tip off.

It might be a stretch to blame a team’s struggles on something as seemingly innocuous as their logo and uniform, but let us look back to the earlier mentioned Detroit Pistons. In the late 80s, Detroit was experiencing an incredible amount of success all with one of the best logo/jersey combinations in basketball. By the mid-90s, though, they unveiled the flaming horsehead logo and teal jerseys and were unable to match their success of the “Bad Boy” era. Though they kept a toned-down version of the horsehead logo through the mid-00’s, they went back to the proper red/white/blue color scheme for their jerseys and went to six straight Eastern Conference Championships – winning the title once in 2004.

Sure there is the easy misstep to confuse correlation with causation, but no team or individual has ever won anything wearing a teal jersey. Let us dig further.

The Washington Bullets, though never really a storied franchise in terms of postseason production (aside from their improbable 1977/78 championship run which allowed journalist, Dan Cook to cement, “The opera ain’t over ‘til the fat lady sings” into the popular sports lexicon), had one of the most iconic logos of all time.

For logical reasons, owner Abe Pollin decided to get rid of the Bullets moniker in 1995. For illogical reasons, the city voted on the Washington Wizards in 1997. Within a five year period directly following the switch from the famed red/white/blue logo to the blue/black/bronze basketball playing wizard, the team got rid of C-Webb, Mitch Richmond, Juwan Howard, Rod Strickland, Ben Wallace, Rip Hamilton, and suffered through the “Jordan-era”, a continuation of awkward management that penned the depressing Kwame Brown story, which was only recently eclipsed by Greg Oden's professional timeline.

Washington’s jerseys through this transition have almost exactly mirrored their on-court production. The jerseys themselves are less harmful than the logo, but not frightening. Simply average. And if we do a mean of Washington’s performance over the past ten or so years, that is exactly what we get. This season, Washington unveiled a new typeface which harks back to the Bullet days, and they’ve gone back to the red/white/ blue color scheme. They have to keep the unfortunate wizard character, but they seem to be making moves aesthetically in the right direction. And now their roster might just be a few pieces away from a perennial hyper .500 team. Maybe…

This isn’t strictly an American epidemic. Our Canadian brothers might be the biggest culprits. The Grizzlies and Raptors were pioneers in late 90s boom of shitty logos and jerseys, but I’ll concede that the original Grizzlies logo along with the original Raptors jerseys might have reached that specific level of comical ugliness that we can only process as “cool.” Though, it is necessary to note here that the Grizzlies simplified their logo in 2004 to a less aggressive, but more fierce bear face and the team now seems to be buying in to the system, namely Z-Bo having a full-on renaissance.

On the other end of the spectrum, we look to Chicago, Boston, and L.A. While slight adjustments might have been made over the course of 50 years, there are hardly any discernable changes to the logos or jerseys of these three organizations. The classic logos have proven to be just that: classic. And between them sit over thirty championship trophies.

Returning to our token, the Houston Rockets shed themselves of their clipart rocket logo in 2003/04, as well as their pinstriped blue jerseys, and after four straight seasons of not making the playoffs they had back-to-back appearances in the post season. Unfortunately, the new logo – while strictly red, the color of champions – looks rendered by a group of lazy futurists, and the team plays with the complete understanding that they have the worst jerseys in the league.

There have been brief moments of minor success – the Shaquie Chan era, a decent campaign from journeyman T-Mac – but Houston has never fully recovered from the logo and jersey overhaul of the mid-90’s. This season could, or rather should be exciting for Houstonites across America: Kyle Lowry looks like he is getting serious about his game, Luis Scola is trying to give credence to the idea that he is highly underrated, Kevin Martin – though not always dependable – has the ability to fill buckets in large quantities, and the Southwest division really just might be wide open.

The big “but” hiding at the end of the preceding sentence – the one Aaron Brooks saw as he decided to board the plane for a season in China – is that damn logo. Until a new design team is brought to Houston, it won’t matter who Kevin McHale starts.