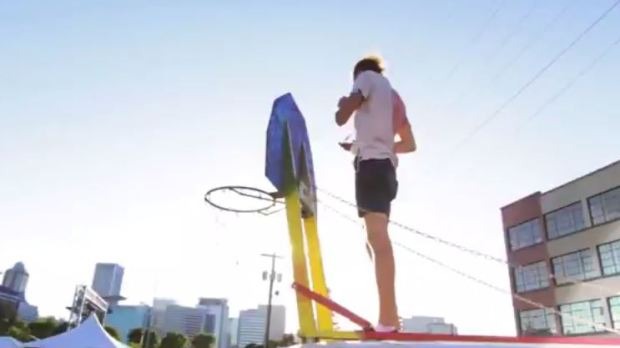 We checked in with Bim Ditson to get the results of the 2013 Rigsketball Tournament in Portland. Here's what we learned.

This year RIPPED! We started out at PDX POP NOW! (Portland's free all ages music festival) with 32 Rigsketball bands chomping at the bumper to get the gravelly court all over their blood. After a torn ACL, countless scrapes and buckets of sweat we had our 16 remaining bands. Monday (where the pictures are from) we championed a dead end in North Portland that had just enough space to chalk out a ridiculous 5-point bonus spot, about 45 feet from the van/rim. RedBulls were shotgunned, scabs from the first round were reopened, and a lucky few moved forward through the second and third rounds. We had half of our final four locked in — Rio Grands, and Soul Ipsum. By Tuesday night we'd filled in our other half of the final four; not before some BBQing, a sprained ankle, and an insane 50+ foot shot from Boone Howard of The We Shared Milk that clunked off the backboard before cha-chinging the chain net for five points. Wednesday was it, the semifinals — Rio Grands V.S. Soul Ipsum, and Hustle & Drone V.S. Thanks — so we closed off the busy SE 10th St. between Morrison & Taylor, right next to Holocene (where we later held our free seven band show) and got ourselves a PA, a local comedian, in Ed Forman, and let the bands work their business out. Soul Ipsum fell first, and next Thanks were edged out by a cheeky Hustle & Drone. FINALS. After going to a third game, Rio Grands' solid fundamentals, along with a size advantage and of course, some luck, took it home and are the Rigsketball 2013 CHAMPIONS!

In the coming weeks stay tuned for webisodes capturing the competition. Here's a teaser trailer full of dunks from punks and gruesome injuries.