The Based God curse on Kevin Durant is real! 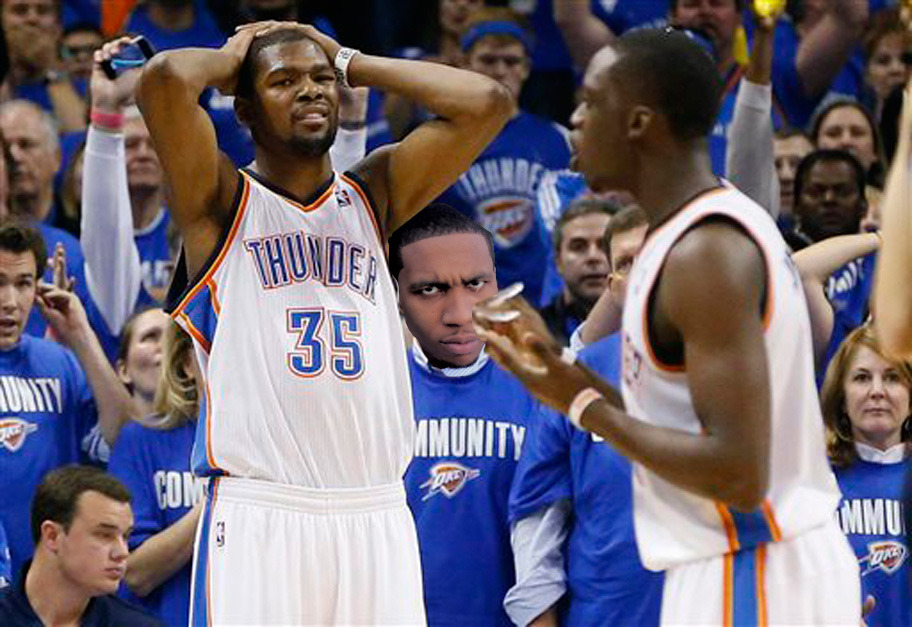 How's your health? They say every hour of sleep less than eight takes ten years off your life. These west coast games be damned, but there are sacrifices you must make. If Steph Curry shoots a 45-foot jumper and you aren't awake to see it, does it still swish with a buttery snap?

Memory is funny and faulty, but are the playoffs always this amazing (Pacers/Hawks notwithstanding, stay strong Big Hibbert)? Overtime upon overtime game; Washington stealing 2 in Chicago; Rick Carlisle out Popovich'ing Popovich; Charlotte not winning but providing enough that we have to watch because, just maybe…

Memphis, buoyed by the doughy authority of Zach Randolph, the handle of Mike Conley, and the stress-inducing defense of Tony Allen, have taken a 2-1 lead over the favored Oklahoma City. This isn't terribly shocking as a defensive-minded team like the Grizzlies have proven their ability to control the pace of a game for several years now; last year they snuck into the Western Conference Finals. They big story is, however, Lil B's curse on Kevin Durant is having a very real and dangerous influence.

If you remember, back in 2011 Kevin Durant tweeted innocently enough that he tried, but could not get into the musical stylings of Lil B. Shots fired. Based God tweeted out a curse, ensuring Durant would never win a title. There were several years of intermittent back and forth between the two culminating in the curse seemingly lifted, but this year Lil B dropped the instant classic “Fuck Kevin Durant”.

But you knew this. You have this song on your iPod, your iPhone, it's track one on your yoga routine.

Did you watch the game last night though? With about three-minutes and change left in the fourth quarter, OKC found themselves down by seven. KD rushed out to meet Courtney Lee, overcommitted, slipped, and twisted his knee. It's a sequence that happens so often you wouldn't think to watch a replay of it 10 times in slow motion at 1080p. I did, and let's just say you won't be surprised to see what I found. #Based-Deus ex machina at 2 o'clock:

Reports of phantasma and supernatural vary in credibility from the manufactured and clearly put on shows like “Ghost Hunters” to the very real and most definitely not-fake weeping statues. This new development in Based God's curse on KD is startling, and though there is no joy in bringing you this news, it must be reported.

You don't live a #BasedLife, you don't get a ring.