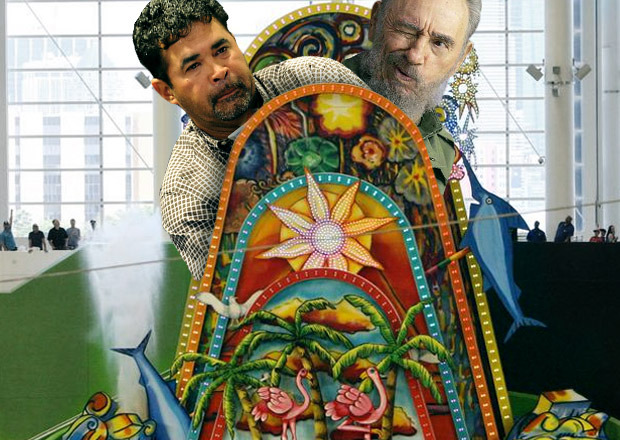 The white liberal’s inherited obsession with political correctness caused an inefficient delay in my response to Ozzie Guillén’s comments about Castro. Internally, I said: this is a non-issue, his suspension is unjust; this is recycled Cold War paranoia; then, what about the invitation to misstep when one thinks in one language but speaks in another; then, what about the Cuban population? I’ve never had to face anything like a Castro in my life — the closest I’ve come is perhaps the time I had hernia surgery in sixth grade. How does it feel to have the skipper – your skipper – say he “loves” the man from whom you took incredible measures to flee?

I watched Guillén apologize. I watched the press conference several times. I can’t recall a time I’ve seen a man in professional sports cleanly, and without displacing blame, apologize for his actions. That’s not to say it never happens, but to see Guillén transcend a reputation marked by machismo and brashness, and say, “I cannot complain about anything because right now I’m not in a position to complain or disagree with what they think about me,” feels for some reason satisfyingly heartwarming; maybe because we’ve become accustomed to a world where accused rapists and organizers of bounty programs “apologize” out one side of their mouth and start the appeal process with the other.

Aside from a few intelligent deviations, the response has been predictable. The first stage is, and always will be no matter the “crime”: extreme outrage, finger-pointing, haranguing, from all parties. Second, we see the emotions tempered, and the more adventurous journalists and thinkers attempt to make a bigger sense of the incident: if not a complete rationalization, they aim to provide context — this is healthy and necessary though not nearly as fun as the first stage. Third, the issue fades into the nether regions of the Internet, somewhere near Myspace and stories of J.R. Smith’s sister fighting in China — and this is for the best.

Past the white liberal political correctness impediment, I say: what Guillén said about Castro remains a non-issue. The real bullshit is the renewed attention on the Miami Marlins. Much the way a Kardashian doesn’t ruin an athlete's career but merely grants us unwanted access — casting our idols as dumbasses with homophobic speech patterns — the worst Guillén has done is remind us that another insufferable sports team does in fact still exist in Miami. Forget Guillen’s suspension over the Castro comments. Forget the jerseys, unveiled last November, these grown men have had to wear game in, game out. Forget the rebranding process made public with a VIP event headlined by America’s favorite Bud Light shill, Pitbull. Perhaps it's the actual aquariums, complete with live fish, built into the backstop of the stadium. But I guess forget even that because, as the Marlins president David Samson says, the aquarium setup “screams Miami.” The next-level depression only really kicked in when Omar Infante lifted a ball over the fence in the first inning this past weekend and set the Red Grooms machine into animation.

All I could think of was South Park’s rendition of the famous Casa Bonita, where the humor is aided by the idea that something so garish, so unnecessary can exist. And yet here we are in 2012: a people casually plagued with economic unrest, a housing market collapse still close in our rear view, a public education being sold out from city to city, a perma-narrative of a widening gap between rich and poor; and this T.G.I.Friday’s-cum-third-grade acid trip is a real structure installed at a real stadium for a real team in a real city. If sports are escapism at worst, inspiration at best, what can we do when something a hundred degrees past satire is erected, in earnest, in the outfield of our national past time?

Fuck this, I’m fleeing to Cuba.

PrevPreviousTiger Woods to enlist in the U.S. Military
Next15 Thoughts on Metta World Peace's ElbowNext