Tiger Woods to enlist in the U.S. Military 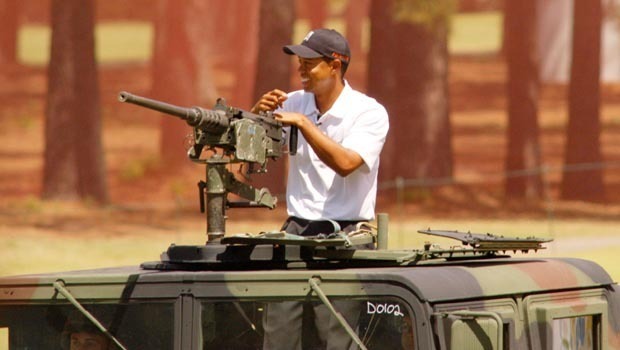 In a shocking development that has left the sports wold stunned, Golf legend Tiger Woods has announced that he will enroll the American armed forces. While the decision itself has fans and critics alike questioning his motives, the timing is even more perplexing–one week prior to the year's most prestigious golf tournament, The Masters.

“Given the scope of the world right now, I have decided to enlist in the Army to serve and protect the United States of America,” Tiger told a packed media room at Augusta, where he's been since last week's win at Bay Hill preparing for The Masters.

“Hank Haney was right,” Woods confirmed, referring to the book Haney wrote that suggests Tiger was “obsessed” with the military. “He made me realize that not only was it something I wanted to pursue, but the precarious nature of my knees made it a decision I couldn't wait on any longer.”

Hank Haney could not be reached for comment, but sources say he was overheard shouting, “Suck it Boomer and Carton!“

While it's uncertain what role the 36-year-old will play once he enlists, he will still have to go through the rigorous training all cadets must pass. Woods also added that he will still play in this week's Masters, hoping to win one last major before taking a hiatus from the sport that has defined his entire life.

It will be interesting to see if Tiger comes back to the game after serving, as did legends Bobby Jones and Ben Hogan, or if this will mark an end to his golf career. If it is, he will leave the sport with 72 career wins on the PGA Tour, including 14 majors, second only to Jack Nicklaus. Depending on what he does at Augusta, of course.

“There are a lot of good young players out there, I think the time is right to pass the torch to Rory and Luke and let them battle it out,” Woods said smiling. “But not before I get one more green jacket.”