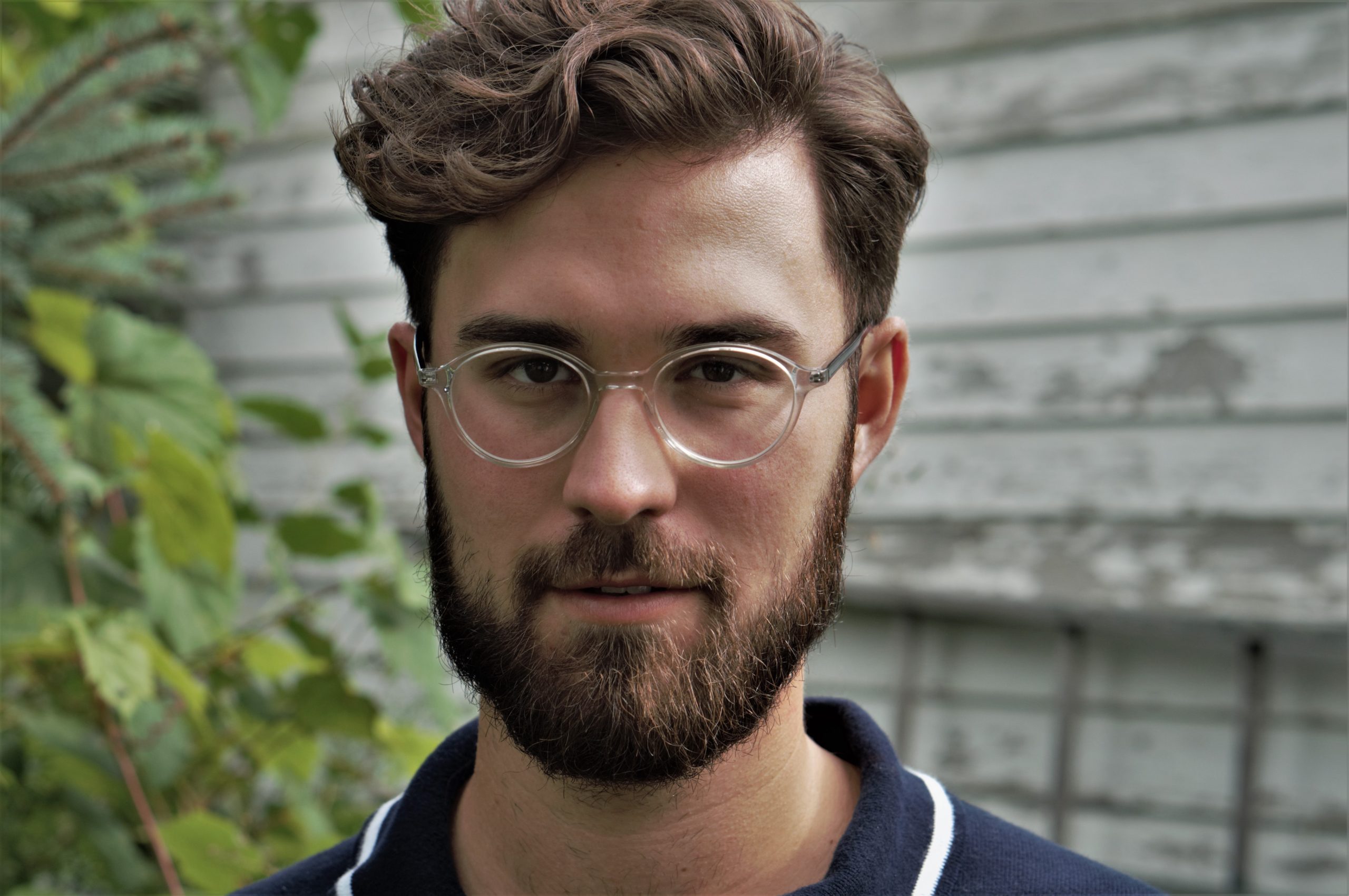 Cam Navetta is an eclectic Detroit-based indie musician who combines croony acoustic songwriting with searing folk-infused garage-rock melodies. Despite being a fairly reclusive artist, Navetta has steadily garnered attention from DIY circles and college radio stations ever since releasing his first album at age 18 under the moniker Jet Rodriguez. Last week, Navetta unveiled his mesmerizing, existential new EP Anabaptism – his first record released under his real name – and we’ve had it on repeat ever since.

Described as a “song diary of my mid-twenties,” Anabaptism is a hauntingly meditative effort that underscores a remarkable personal and creative journey for the Detroit native.

“I thought this was going to be my record where I criticized religion. It ended up being my record about having faith,” Navetta said.

Indeed, Anabaptism is a deeply reflexive record that parses Navetta’s spiritual journey within a culture that “scoffs at sensitivity, vulnerability, and existential questioning.” For Navetta, that road to self-discovery was a rough-and-tumble one consumed with struggles with addiction, mental health, and crises-of-faith.

“Growing up and deciding who I was going to be was excruciating,” says Cam. “It still is, because it’s a never ending journey, and we’re always growing. But there is something about your twenties in particular that really puts you under a microscope. For me, it felt like the world was looking at me saying, ‘Hey, are you sure about this person you’re trying to become?’ And subsequently, I felt like that person was being rejected.”

Crafting his new EP proved to be therapeutic and self-actualizing experience. From start-to-finish, Anabaptism is full of pastoral, meditative sounds bursting with honesty and harsh truths. Opener “The Dirt and Sorrow” is a rollicking intro, with a propulsive, twangy acoustic guitar bellying rally-cry verses through Navetta’s effusive and beautifully understated singing voice. Pulsating percussion and spurts of harmonica bring the track to rousing sonic heights. Then there’s the sparse, plucky ballad “Onward Christian Soldier,” a marvel of symbolic songwriting in which Navetta grapples with his religious identity. “Let the cross down from your shoulder,” he croons as touching violins swirl dreamily. Meanwhile, closing track “Wicked Rains” is an uptempo slice of garage that brings the record’s themes into sharp focus: “When all is said and done/ Will you choose the life that you’re always running from?”

Ultimately, Anabaptism is a lush, deeply personal and poignant indie rock statement recalling legendary artists like Elliot Smith, Kurt Vile, and Songs: Ohia. Most notably, the record’s coming-of-age narrative is brought to symbolic life through Cam’s past immersion in the Christian Anabaptist doctrine. We recently visited with Cam as he shed light on his faith, his personal struggles, and how those facets guided his creative process. You can check out that interview and give Anabaptism a spin below:

Talk to us about your Anabaptist past, and explain to people Anabaptism if they are unfamiliar with the faith.

Anabaptism, the title of the record, is a metaphor for my own personal baptism into adulthood, and all of the various challenges and existential questions that experience brought with it. It’s essentially the song diary of my mid-twenties about my relationship to alcohol, my mental health – or lack thereof – and my grappling with faith. To go a little bit deeper, the word “Anabaptism” is a doctrine which means that baptism should only be administered to believing adults, and that’s where the idea of “my baptism into adulthood” came from.

As far as my faith goes, that’s where things admittedly become harder for me to lay out in clear terms. I don’t claim to have all the answers and I haven’t totally closed the book on it. I suppose I was a fairly average evangelical church kid until my late teens, when I discovered that my denomination had roots in the Anabaptist movement. I started digging into the rich history there, and some of the main tenants of Anabaptist philosophy immediately resonated with me. It appealed to me in its juxtaposition to the popular version of conservative evangelicalism that was presented to me growing up. The Anabaptists are pacifists – non-violent, anti-war, radical separatists…almost anarchists who don’t recognize the government as an authoritative force…and for whatever reason they tend to deeply value the role of art in their culture. When I learned about all of that, it became intoxicating and I adopted it as a part of my identity.

But for all intents and purposes, the title “Anabaptism” just symbolizes a whole bunch of complicated subjects and experiences for me and the grand takeaway is that this record is about my birth into adulthood.

Are there any other philosophies or worldviews that shape the music you make?

I’m not sure if this qualifies as a “philosophy” per se, but I’m a massively sensitive, feeling-type person, so that certainly influences how I process the world and create art. Along with my penchant for big emotions and moods comes a fascination with my own mental make-up and predispositions.

During the time I was working on this album, I’m somewhat embarrassed to say that I was dealing with some suicidal thoughts and tendencies, which ultimately lead to a diagnosis of bipolar II disorder. The diagnosis itself quickly became another area of my fixation. The tension of mania and depression not only interested me as a poetic concept – light and dark, high and low, intensity and apathy, etc. – but also as a very real thing that was impacting my daily life and behaviors. It helped me get a grasp on some of my pitfalls and faulty mental processes, but I found it empowering too because for the first time in my life I had a name for “it.”

Since then, I think less and less about the diagnosis and just try to focus on living my life in the best ways I can. It’s difficult to draw a neat line from that stuff to my art, but yes, I believe it has had a profound impact on my music.

Is there anything you would like to add about the state of the world right now?

It’s clearly a very challenging time for everyone, at the individual and mass levels alike. I notice the general angst and quiet reflectiveness of the world’s mood right now. It’s eerie. I believe this is causing us to confront our deepest values and think about what is truly meaningful to us. But we’re all in this together. We will come out of this changed, for sure. Whether it’s for the better remains to be seen. Humans have a fairly mixed track record when it comes to global crisis.