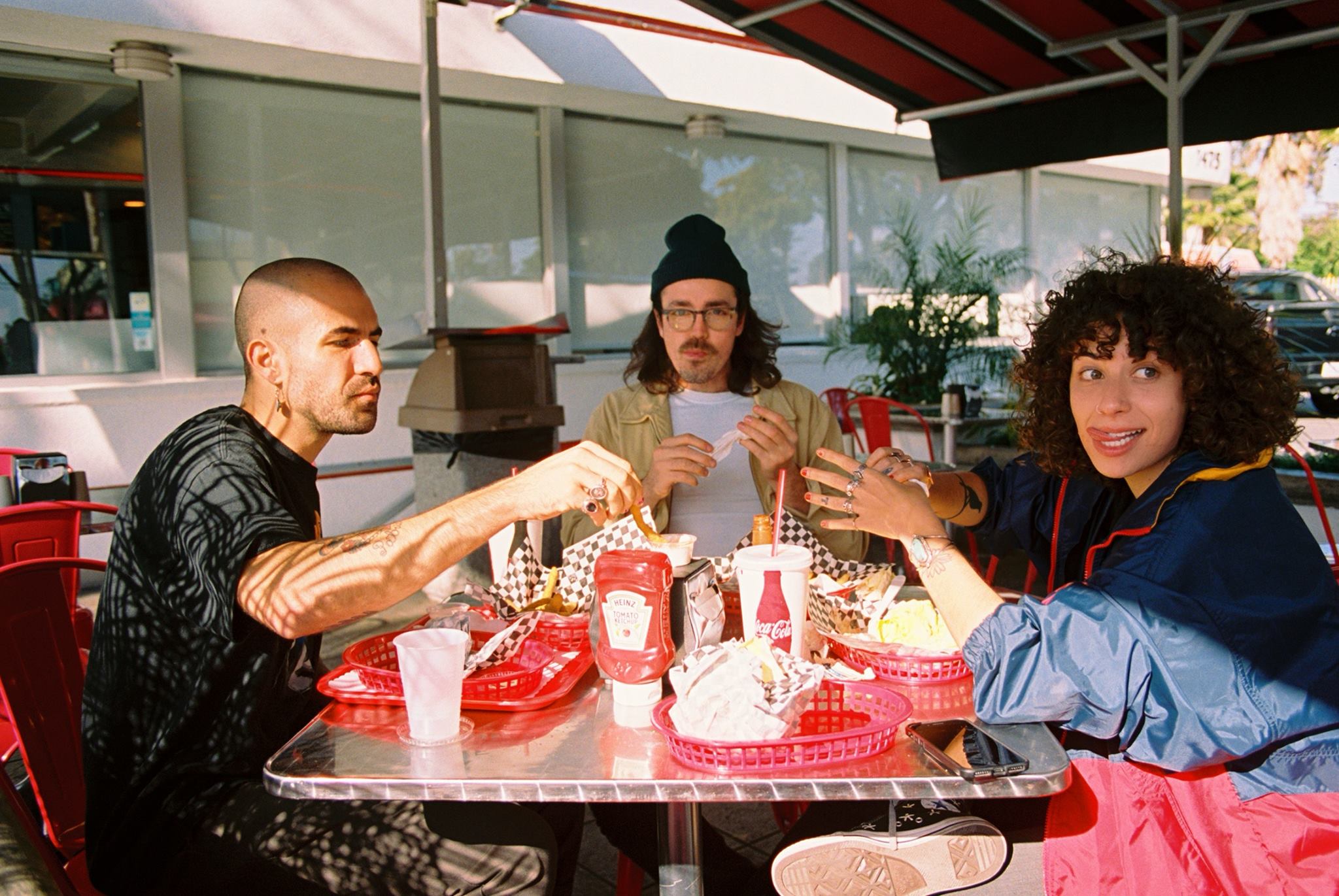 It’s hard to ignore a nine-minute song on a 40-minute album.

And it’s nearly impossible when the dreamy voice of Daisy Hamel-Buffa shines on Steve Lacy’s “Like Me.”

Her voice is undeniably alluring. Even Tyler, the Creator described it as “sooo good” on Instagram last week. But Daisy couldn’t tell you how she learned to sing like that. It just kind of happened: one day she was born, and the next she was screaming Britney Spears lyrics into a boombox.

She and her Los Angeles bandmates — bassist Alex Kasvikis and keyboardist Ben Salk — are now five years into crafting pop melodies as DAISY, and have finally picked up the phone for their first-ever interview, which feels a little unorthodox given their musical track record. While they’re not at Britney’s level quite yet, they’re getting there. DAISY — consisting of the aforementioned trio as well as Max Morando on drums, and Matt Fildey on guitar — is finally seeing its fan base get a deserved boost since beginning in 2014.

Lead singer Daisy made herself known on May 24 as the only feature on Lacy’s Apollo XXI. Her voice on “Like Me” stands out as it does on DAISY’s two EPs, 2016’s Smoke About It and 2018’s HAVE A SNACK. While the song will undoubtedly push her group to the masses, Daisy doesn’t see Lacy and his bandmates in The Internet as anything other than “homies.” In fact, DAISY has some history with the Odd-Future-spawned group.

“[The Internet] just kind of lived down the street from my friend. So I met them that way. I feel very lucky. I love working with them so, so, so much. They’re just an amazing group of artists that are just the greatest people,” Daisy said. “It’s great to play with just homies. It’s great to be around homies and support homies.”

Before teaming up with her musical homies in The Internet, Daisy remembers wanting the “perfect, beautiful band,” and uniting the trio of herself, Max, and Alex allowed that to happen. The other band members met seamlessly too, and DAISY started to grow. The group’s first EP, Smoke About It, came soon after in 2016.

The four-song project is a collection of one-take jam sessions and melodies that make an abrupt change in tempo feel normal. Two of the tracks, “Way Cool Baby Love” and “Overtime,” end up feeling like completely different songs compared to how they start. It’s a signature move for the pop band.

“To me it feels like part of making pop music, making music that is catchy, both by nature and intentionally, and then at some point, tearing that rug out from the listener,” Alex said.

The process behind creating a DAISY track is pretty straight-forward: Daisy or another member writes something, brings it to the crew, and they cook it up in their friend’s home studio. They get off their day jobs, head to the studio, postemate a few salads and see what they can create.

Alex can’t forget the summer he ate the most salads, though; a summer he spent entirely in the studio.

It started at their usual hotspot, Swingers restaurant in LA, where Alex, Daisy, and another friend — who stored a purse under her leg — were sitting outside. A man came by and snatched the purse, so Alex took off after him.

“Basically his boys pulled up in a car. There was a gun in my face. It was whack. I saw the gun, I figured out what it was,” Alex said.

He “ate shit” soon after and had to run back half a block to the restaurant with a broken knee. Daisy sat in shock after her friend returned, especially when she found out the bag only contained a cell phone, $20, and a pair of sunglasses. Not a lot was lost.

But the near-death experience forced Alex to quit his job and focus on DAISY.

“I would spend like 18 hours in the studio just cleaning up the sessions and stuff. Everyone else would pull up and we’d all be creative. Then they’d go home and I’d still be naming files,” Alex said.

He said focusing on music full-time was “tight,” and noted that the product of his “weird leg” is now recorded forever.

That recording is DAISY’s second EP, 2018’s HAVE A SNACK, which the group put together in bits and pieces rather than the single-takes that gave Smoke About It its live feel. But the group sees the growth between the two projects as huge.

“The process was so, so, so different. And through that we kind of found our sound a lot more,” Daisy said.

The lead single, “Still Here,” a flavorful ode to the players and cheaters of the world, shows off the band’s love of horns and bridges with massive tempo shifts. The track was supposed to feature a rap verse, but when the artist pulled out, DAISY got creative, recorded a call-and-response verse with pitched vocals, and called it a day.

The band is used to trying something new, as sometimes members go on stage under Alex’s alter ego, MyFriendAlan. The project sees members of DAISY in different positions — Alex on guitar and Daisy sporting backing vocals — but one thing is drastically different about the project. Whenever Alex hits the stage as MyFriendAlan, he puts on a massive cowboy hat and sings lead vocals. Its normally not his gig, but he says it allows the group to let loose and not be so confined to pop melodies.

“I can just put on a cowboy hat when I want to be MyFriendAlan and I can be the dude in DAISY the rest of the time,” Alex said.

Kasvikis said his additional musical outlet was inspired by another one of the group’s seperate projects, The Roswell Universe, a funky horn-driven LA group. But members of DAISY are currently most stoked about celebrating the release of their next single “Day Off,” with a music video dropping on May 30 — just one day before they hit the stage at The Roxy in LA on May 31.

The record started as a Matt-Martians-produced demo, which marked the first time the group ever built off someone else’s music. When Martians eventually released the track on a Jet Age of Tomorrow record, DAISY reworked it and made it their own. The song still started as a gift from a homie, and that’s exactly what DAISY wants to enforce with its music. Whether its Steve Lacy, their agent Bill, or chasing after a purse thief at a restaurant, the band revolves around the collective work of LA-based friends.

“It’s possible to do big things just within your friend group and with your homies…That’s the big one for us. Make shit with your friends. There’s no excuses not to be making your art.”

Tickets for DAISY’s May 31 show can be purchased here.