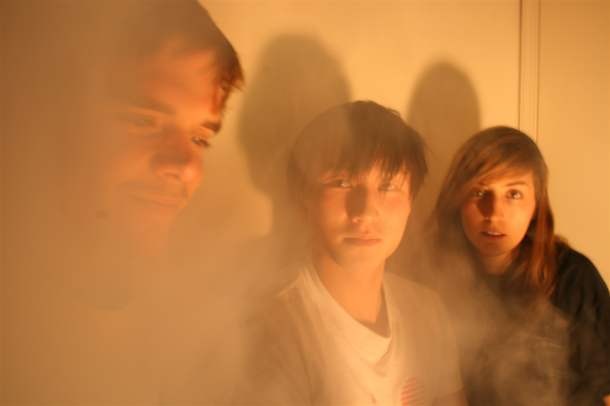 Indie rockers Friendo from Calgary, AB have
set out on a summer tour of North America. Amid a hectic schedule they
were
kind enough to talk about tapes, genealogy, Calgary, lack of sun, comic
drawing, likes, loves, and pet peeves.

What was
the inciting incident/event that brought you all together?

N: I was
dating Mike and then we were researching our family trees and funny
surprise,
turns out we're second cousins. We met Henry at the family tree research
building, he's a sociologist. From then on we drowned out our incestual
guilt
with electric guitars.

I love the
cover art for Cold Toads. Is this your
handy work
Nicole? How do you compare and contrast drawing to singing and playing
guitar?

Nicole: Yeah
that’s my work, but I also
want to give Henry and Mike some credit for inspiring me with their
faces. I
would say that my guitar playing is different from my drawing in that I
draw
with a pen and I play guitar with a pencil. They are similar in that I
am
extremely egotistical about both.

Thanks for keeping the cassette alive to see another day.
So much back and forth banter has argued digital versus analog, but how
about
cassette tape versus vinyl? Thoughts? Likes? Dislikes of either medium?

N: I
personally choose cassettes as my favorite medium because I'm a huge
cheapskate
and they are generally 10-20 dollars less than vinyl. The only thing
better
than tape is free mp3s. My friend Kevin sells some scented cassettes,
which are
nice too. This is superior to vinyl, which generally smells dank like a
scabby
basement.

How has
the sound on Cold Toads been affected
through the mix up of instrumental roles?

N: I
probably would have degraded it considerably except for the fact that I
am a
mainstay on guitar and held it all together.

Henry, how has the jump been from your proficiency on
guitar and bass to taking on drums treated you?

Nicole
answering for Henry: “I am always happy so it was wonderful, thank you
Mike and Nicole for giving me this opportunity.”

Michael, can you describe the creative differences of your
experiences with Friendo compared to your work with Women and Azeda
Booth?

Mike:
There is a girl in Friendo, which is always challenging. They are such
nags.

What are some of the most annoying band comparisons by the
press that you all have contended with?

The buzz is all about your collective fondness for
music of the 90s, 70s and 60s. What experimental rock groups from the
90s do
you all like?

N: I think
they just mean Sonic Youth. Mike and Henry like post-rock a lot.

How about
70s punk groups?

And which
pop groups from the 60s do you all dig?

Is there anything that excites you all about the 80s? I
don’t blame ya’ll if not.

Tell us how the good folks of Calgary have
responded to your music.

N: All the
little kids love our shit.

What other
groups from Calgary should we look out for?

N: Faux
Fur and No You Hang Ups. Also, The Shrapnelles and Topless Mongos.

Excited to
catch your upcoming San Francisco show at Bottom of the Hill, June 1st! What’s next
for Friendo after the big U.S./Canada summer tour?

N: We'll
get ghostly pale
recording in the basement during the few summer months where vitamin D
is
available to Canadians. I'm gonna draw comic books 'til Mike gets back
from
tour with Women. Henry will continue to excel at researching genealogies
although our tour is completely screwing over his respectable career, so
he
might spiral into hopelessness for the first time in his life.