On the Pacific with The Presets 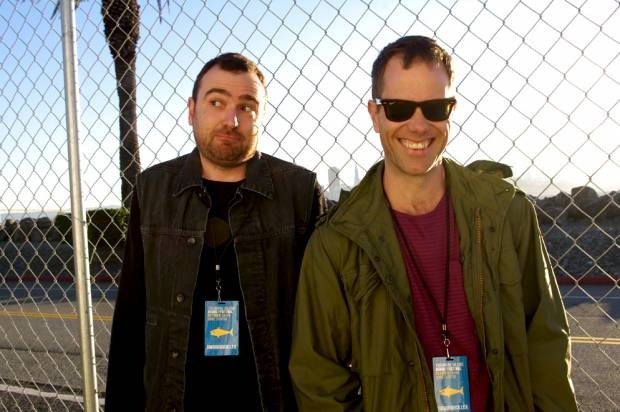 While on a weekend holiday during the Treasure Island Music Festival in San Francisco, photographer Jenn Hernandez and I had a chance to talk to Australia’s electro duo, The Presets. Having recently released their album Pacifica, Julian Hamilton and Kim Moyes talked to us on the allure of the coasts, referential treatments of music, and fast food by the sea.

You named your album Pacifica, had either one of you been to Pacifica, CA before you naming the album?

Kim Moyes: Pacifica I feel like its more of a state of mind of people who live on the Pacific Ocean; us, you, Sandiegans, so yeah, it wasn’t named after that city but we should visit there, maybe.

If you go there, you have to go to the Taco Bell.

On the beach in Pacifica, they have one built off the parking lot, right by the water, one of the most glorious and shittiest there for all your Taco Bell needs.

J: We’ll have to put that it in our itinerary.

J: That was more like, the jeans I was wearing in that cover shoot had this funny dark patch around my crotch and it looked like I wet myself so I’m convinced he did like a full on swirly swirl, ‘crotch-away’!

But then you guys engage in say like apocalyptic dancehall, like “Adults Only” sounds not only like a video game boss track but a tour down neon avenues of some sort.

J: I like it, you should be writing our answers man!

Ha, so how is that a reflection of the dance music culture that surrounds you behind a track that is both futuristic and indicative something else?

K: Unique to us, unique to our experiences and something that‘s gonna stand out…

J: ‘…like a walk down a neon avenue’! You don’t even remember you just said that a minute ago!

K: It’s one lick, one lick of painting rainbows with neon!

Australia is something else. You have a dance culture, a chemical culture, and one of progression. I was just wondering what can you give us on the state of dance music culture in Australia and what the progressions of the future might hold?

K: Australia is just wild, you know, it’s an untamed frontier and everything that comes out of there is high octane and the experiences that we have as a band when we play at a festival or something it’s frightening sometimes what the crowd gets up to , I don’t what the future holds.

J: Yeah, I don’t know, that’s just part of what we do, we like writing songs, we like making techno and we try to put it together in an original way that’s not just you know, dance music with a bubble gum melody.

K: We try to put different ideas together and that’s where we get really excited when we start to hear a couple of things coming together that we haven’t heard before like a sea shanty with bass tempo techno beat, that’s our thing.

On the album there is a balance with tracks like “Fall” and ending with “Fail Epic”, what is the fixation on falling and failing but everything is epic, the keyboards are always so bright.

J: There’s like a failing and falling, there’s a beauty in…

J: I think on the record it goes”Push” and then “Fall”, like a push off a cliff!

But both are given equal credibility! That’s the thing that I really admired and enjoyed and kept me seeking forward, and never getting hung up on one vibe or another.

K: That’s cool, usually people notice that and think that we’re too schizophrenic and we can’t stay on one idea but actually we need a lot of different moods, and characters to feel complete.

Big question I got is your commentary on the preconceptions of the Presets, in pre-processed and pre-rendered pop and with your name alone and what you contribute to the pop canon, is there a mission statement of The Presets given your title and working within a genre that relies upon preset channels and samples and all that?

K: I don’t know if there’s a mission statement I guess we’re just trying to put all the things we really like together in our own way and just be true.

J: Yeah, I mean we’re music makers and that’s what we need to do and we’re a music band and we’re always trying to make some kind of sense of it and make records with it, and beyond that just hope the people like it.

J: And plus, own all people…I’m trying to think of something insincere.

There’s very little of what you guys do out there, voices are often so mechanical but through balladeering, songwriting…

I’m not going to be here and say you’re like, the neo-Giorgio Moroders

J: It’s not really, we like to put things down to the most basic thing, you know?

He’s great, but you guys move the conversation forward while opposed to some folks that could get hung up on sound comparative game that could be described as “I Feel Love”-expanded.

K: Yeah, we don’t think like that when we make the music but I guess everyone who listen to that stuff is desperate to make patterns or make connections to what they’ve heard and this sounds like that nad whatever. That’s not how we do it. I always get that too when I see a press release for a band this is like Prince scored by whatever…

K: It’s not like we’re in a period of music where nothing is original, everything is just like a pastiche of all this shit from the past, real boring.

J: No real musician goes into the studio and goes, ‘oh man, I want to make something that sounds like Prince meets this’, like no one does that, people make music, most people, because they have to and they would feel shit if they’re not doing it.

K: You don’t want to go to the studio just to sound referencing other people’s shit.

And what you guys do on a dance and electronic basis with a focus that says the coast is where it’s at, it’s where you derive energy, it draws a whole different thing.

K: I think the coast is where civilization is, you know? It’s where people go for trade, lifestyle, and culture as well.