On Touring with Your Dog: A Cowboy Romance 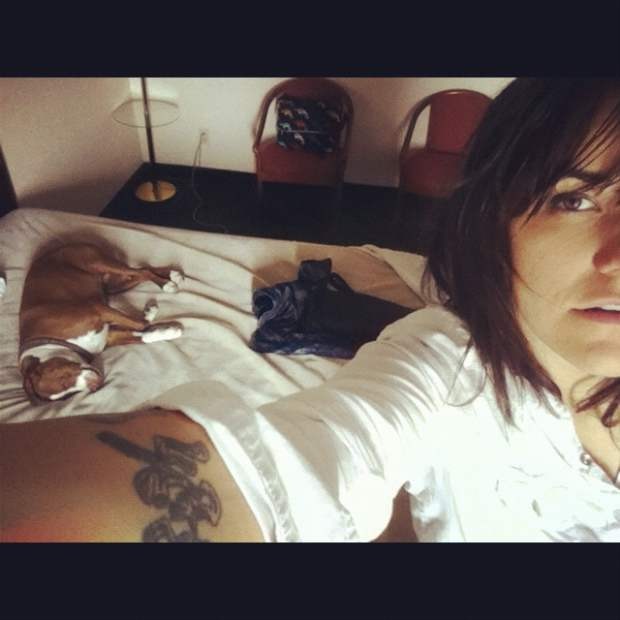 I been tryin' to enjoy all the fruits of my labor
I been cryin' for you boy but truth is my savior
Baby, sweet baby if it's all the same
Take the glory any day over the fame
– Lucinda Williams

There’s some sort of fluke with my car stereo. Whenever I plug in my phone it immediately and alphabetically starts playing. For two weeks after leaving the East Coast it was “Ain’t That Good News” by Sam Cooke. He kept saying, “My baby’s coming home tomorrow”, which made me feel a little prematurely melancholy, as I had no prospect of coming home any time soon. The recording is very cheerful and after you’ve heard it a few hundred times (while looking up how to get to the venue or the only health food store in St. Louis), you start to feel a little nuts. So I took that song off my phone, not really thinking about what the follow up “A” song might be, which became Lucinda Williams “Abandoned”. She is warbling around the notes and her abandoned heart. I love Lucinda Williams, but now I wake up in the mornings singing “All of my love has been taken for granted”. This is no way to live!

I left for a somewhat scattered and far flung two-month US tour at the end of March with a ton of gear and my eight and a half year old pit bull Oly. Traveling in the elegant Toyota Matrix, each night and every morning we pieced in a full drum kit, a large road case filled with random electronics, a folding table, a violin, a Les Paul, a rug, a suitcase lovingly named Big Pink, merch, some recording gear, half a dozen books, (including, but not limited to Milan Kundura’s “Laughter and Forgetting”), random food items in various states of eaten and decayed, and the occasional passenger.

Touring in general is strange. Time passes differently. You forget about the routines of home, that other people still have them, and otherwise impossible feats become daily fodder. Some days you drive for 9 hours then play a show. Some days you drive 13 hours and only stop 3 times for 5 minutes. (there is a way to do this, but I’m not willing to get that personal with specific details). You’re off the hook for all the things you want to do and create, but still have a lot of time to think of them and imagine them. Ultimately you can only do what you’ve set out to do: Play shows and drive.

Touring alone is particularly bizarre, however, because you’re not experiencing this double paced life with anyone and you’re being witnessed only at the show itself, which is of course the ultimate act of getting witnessed. You go from the highs and human connection, of performance, to the distinctly drab and quiet experience of loading gear into a Motel 6 all within a couple of hours. It’s a matter of extremes and so much of the experience seems to be happening exclusively in your head. You can’t use your hands, or really any part of your body most of the time, so you make random voice memos that say things like “mash up idea: Florence and the Machine “What the Water Gave Me” vs. Emmylou Harris “Deeper Well”! Brilliant, obviously.

All of this said, there were a few things that kept it all moving and prevented me from rocking in a corner somewhere in Kansas.

First, the dog! To my surprise and extreme elation, almost every venue allowed and loved having her. The first show was at The Space in Portland, ME, an art gallery / venue that is very dog friendly. It was her first show ever and she spent the evening listening dead center, getting pats and making the rounds. While I listened to my friends Live Footage play and watched her socialize, I remember thinking “this is happiness”. Halfway through my set she came right up on stage and sat underneath my table for the rest of the show, looking out at the audience. She’s the kind of dog that can make the toughest bouncer a real sweetheart. Hotels were another matter and we were left with a very limited selection. Ultimately I was grateful. There’s a lot more cowboy romance to these varied and unpredictable roadside motels. The story is richer and the people are more interesting. Yes, occasionally I double locked the doors, felt extra thankful to have a pit, and hoped I didn’t wake up smelling like smoke.

Second, Terry Gross! I’ve been a fan of Fresh Air for a long time now, but it’s really taken a turn for companionship (or fanaticism) in the last couple of months. I would cull through my cache of episodes when I couldn’t hear any more music, or I’d lost the romance of the landscape. This was a proper education! She has the unique ability to ask questions and connect so completely with the interviewee, but no matter who she was interviewing, I always felt I learned something about my own craft, or approach, about leaning in, about allowing an audience to come to you, about being honest. Upon being asked about my day, I found myself saying, “today, Terry Gross was interviewing… and… ”. The most memorable is perhaps driving through the mountains of Colorado, west of Denver on I70, crying and laughing my way through all of her interviews with Maurice Sendak.

Finally, the shows! Ahh, right, why we do this. I mean, those 60-75 min on stage must be pretty incredible to withstand all the time in between. No matter how much curiosity I possess for the people I encounter , or brilliant landscapes I cross, or friends I see in different cities, it always comes down to this short time on stage. It comes down to the 50 people who show up in Buffalo, or the incredibly reverent and warm crowd in San Francisco, or doing a dance set on the fly in Spokane cause it’s raining and cold and a ton of kids showed up at the festival anyway. It is these lawless moments that I live for and the reason why I’ll see you in October!