Life at home with Pelican: post-metal collides with adulthood 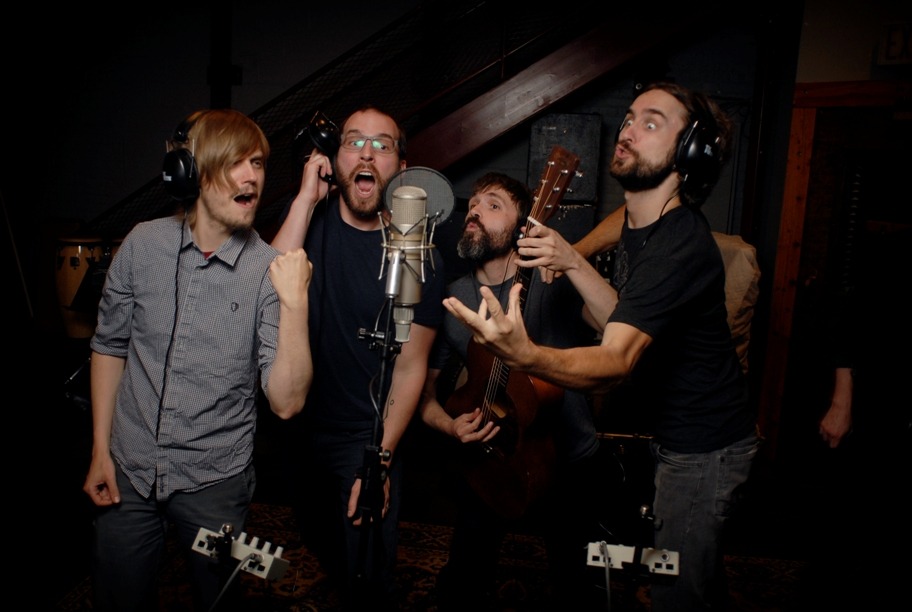 “I think we’re in motion again,” Pelican guitarist Trevor de Brauw tells me over the phone. The four piece instrumental outfit is getting ready to release Forever Becoming, their fifth full-length. The record, out October 15 on Southern Lord, is Pelican’s first album in almost four years. The band has gone through no small amount of turmoil in that time, losing a member, falling into a stretch of inactivity and then deciding to pick things back up again.

It’s been an extensive process in learning and adapting, striking balances and finding middle ground. When founding guitar player Laurent Schroeder-Lebec decided to step down in 2012, it was uncertain what shape the band’s future would take. Since the beginning it had been the four of them, with Schroeder-Lebec shouldering a significant portion of the songwriting, even if he wasn’t always out on the road on some of the later tours. “It was frightening on one hand because he was such an active writing contributor and such a big part of what made Pelican, Pelican,” de Brauw says. “The sound of Pelican was really the sound of the four of us and the different influences that we brought to the table kind of coalescing into a unified sound.”

The break that followed would be a time to reflect and regroup. The band had suddenly found itself in a place it had never been before, restructuring its identity to suit a life based at home rather than inside an overcrowded van. They’d decided to stop pursuing the band as a full-time project and step away from the rigorous touring schedule to which they’d dedicated themselves for much of the past decade.

“We all entered the work force and had to relearn how to do a band as a part-time enterprise,” de Brauw says of this point in the bands history. “There were some unique challenges in figuring out how to restart, but as a result of reconfiguring things I think we captured a new energy that maybe had been lost over the years. It felt like a really exciting time for the band again.”

Without Schroeder-Lebec in the band, writing a new record would be a different process than ever before. There were new hurdles that needed to be overcome, certainly, but there were also advantages to the reshuffling of artistic responsibilities. The break had been invigorating in a way, leaving in its wake a creative energy that felt very present in each of the remaining members. They were forced from their comfort zones, stepping back and away from some of the habits and formulas that had come to characterize their writing process over the course of the band's tenure.

“The obstacles were, if anything, positive things,” de Brauw tells me about writing Forever Becoming. He and bassist Bryan Herweg would work together to do most of the writing for the record and that was a new experience for them. “Although we’d played alongside each other in the band for over a decade we’d never really collaborated as songwriters before, so it kind of presented a whole new template to work from.”

At the same time, they felt hesitant to include a new member in the writing process so soon after Schroeder-Lebec’s departure. There’s a certain level of continuity that a band tries to maintain from one record to the next. It needs to make sense in a way, to feel like a logical progression, even as the sound continues to grow and mature along the way. They were conscious of that risk as they went to work writing the record, waiting until the final stages before bringing Dallas Thomas (who contributed to the full record) into the band as a fulltime replacement. “We didn’t want the next record to feel like a drastic change,” de Brauw says. “We thought if the three of us wrote a record, it would sound less different if we were missing a voice than if we replaced it.”

With just eight songs clocking in at over 50 minutes, Forever Becoming has a more sinister feel than any of the band’s previous material. It’s incredibly dark, but in a way that is both punishing and interminable. There’s an undeniable departure from 2009’s What We All Come to Need, the new record featuring less of the melodic leads and overall ambience, plausibly the result of Schroeder-Lebec’s absence in the studio and the sort of reconfiguration that de Brauw had mentioned.

“Bryan and I are really fans of open playing style, not getting super busy with right hand picking work, which is something we did a lot more in the past,” de Brauw tells me. “I feel like because we were going for a more open, spacious sound maybe we picked tones that were a bit heavier and wider and didn’t need to be as crisp and cutting through. So I think as a whole the record sounds a bit more bludgeoning, the tone is a very dark one and communicates, at least on the front half, a lot of despair.”

In that sense it seems fitting that Pelican would return to Electrical Audio to work with producer Chris Common for Forever Becoming. Having recently produced Chelsea Wolfe’s Pain is Beauty, Common is a veteran at crafting the dark and atmospheric. Pelican’s return to Electrical Audio marks the first time in the band’s career that they had worked with the same engineer for more than one album, the choice reflecting a desire for comfort that felt lacking as they entered the studio for the first time without Schroeder-Lebec.

With the new record out, Pelican has a string of tour dates set up in the coming months. As much as he’s looking forward to the experience of playing live again, de Brauw tells me he has some reservations about going back out on the road. There are responsibilities now, things that complicate the urge to drop everything and leave home for an extended period of time. “It’s stressful but it's all positive stress,” he says, touching on his struggle to balance the band with a family and career. “The band has to take a backseat to certain things in a way that maybe it wouldn’t have in the past, because obviously my son’s well-being and happiness are first and foremost in my concerns.”

From 2005 until 2009, Pelican had been a career for de Brauw and his bandmates in a very real way. They’d taken significant strides as a band, sending ripples through the world of doom/metal and pioneering their own subgenre of instrumental post-rock that separated them from most other bands of that era. They were out on the road for a sizable chunk of each year, rearranging their home-lives so that they could dedicate themselves entirely to the band, ready to follow that path wherever it might lead. But as the years rolled by the rigorous touring schedule had begun to wear on them. “We spent years and years doing it month after month after month,” de Brauw says. “All it did was make us question why we were doing it. Which is part of why we had to take a break, we didn’t know what the fuck we were doing with our lives anymore.”

There are plenty of bands that never make it past that feeling. It’s all too easy to become disillusioned and call it quits, the road to reflection and adaptation can often times be a much more challenging one to hack. But coming back to Pelican, de Brauw and the other remaining members knew that it couldn’t work for them in the same format that it had before. “I don’t think we’re ever going to be in position where we are going to try to approach going back to doing the band full time. It’s economically unsound and furthermore it’s just not a tenable lifestyle for any of us. We’ve kind of crossed our boundary as far as how much we could take.”

The break had given them an opportunity to step back and reconsider what it was they wanted out of the band, why they were driven to play music at all. “It seems like pursing music as a career is the way to achieve to the dream, but then it turns out that it’s not the dream,” de Brauw tells me. “The dream is the music itself and the career takes away from that. We needed to rediscover that the dream wasn’t about making a living off of it, it was just the music itself and that’s what the new record really represents to us, it's rediscovering that path.”

Pelican's Forever Becoming is out now on Southern Lord.