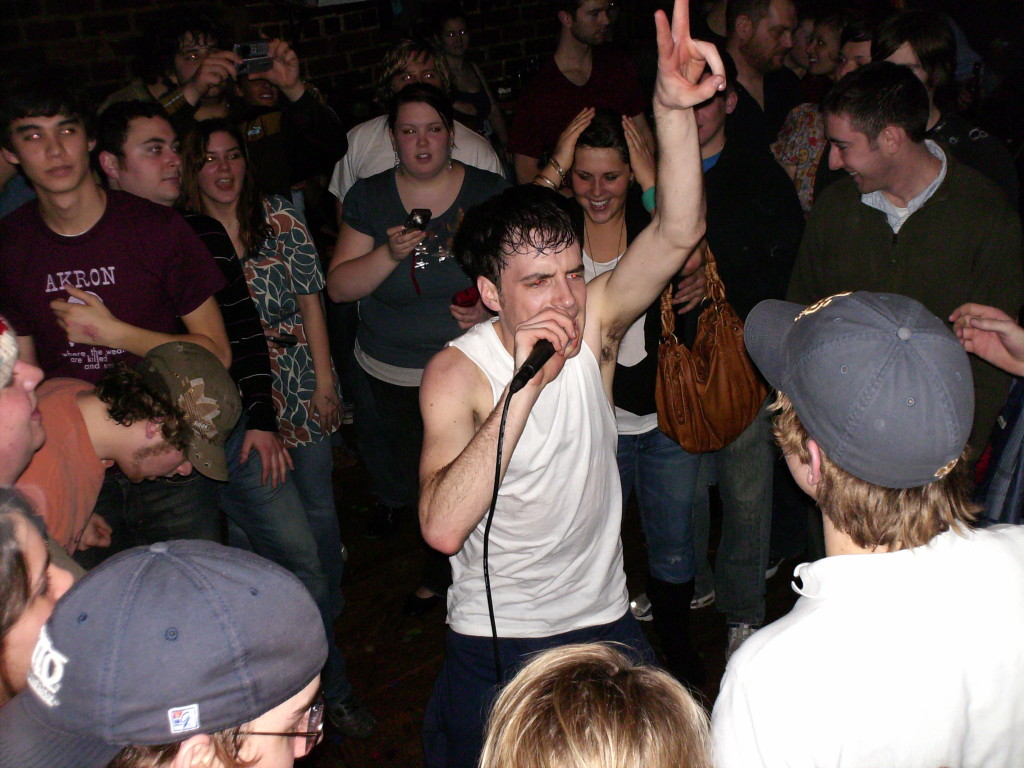 Greg Gillis, stage name Girl Talk, gave everyone from indie rockers to hip hoppers a reason to feel safe to dance in our wee college town, even after he's graced stages with Beck and Kanye West. Seems he has people getting buck wild/naked wherever he goes. (He's in Play Girl now, after all).

For those curious how Girl Talk fills the oceans of time when he isn't working a full time job between weekend shows, Gillis notes, “I've been getting a lot of remix offers. But, if they ask me to not use samples because they want to put it out on CD, obviously people will think 'this isn't as exciting as 400 songs crammed into forty minutes.” (Gillis is in the planning stages of starting a “remix team” called “Trey Told 'Em” with hometown friend Frank Musarra from Hearts of Darknesses. Until then touring takes up his fun time.

Naturally I was geeked for his sold out performance in my tucked-away college town of Athens , Ohio, where dance outbreaks come with the same frequency as deadly viruses (so far we're safe on both fronts); we're more prone to drink and stumble than to buzz and… boogie.

I could tell I was not the only one feeling blotto and energized about what tonight might bring, and for once it was not from being surrounded by Frat Boys on Sparks. No doubt we were buzzing off the attention deficit speed-freak pace that Gillis' music sets from the get-go; and it's this schizophrenic impermanence that makes his work beautiful. While Gillis considers the tracks on Night Ripper to be songs, he takes his catalogue of samples and rearranges them differently for any given performance. “To me they are all new mixes, but there is a lot of stuff on Night Ripper and beats I tend to fall back on,” he said.

His Friday performance in Athens had college kids on it all night. His set start was confused with the interim DJ's music, with girls hollering and the stage filling immediately. Once Gillis actually got his laptop playing, nothing slowed down. It wasn't ten minutes into the set when I saw my roommate grinding on two girls on stage and two other girls, already shirtless, demanding we all get naked. It was already hot as balls in there, with the heavy friction of all of us packed on the stage and floor; I joined the half naked people.

(A brief digression: I've always found it intriguing that every white person in college knows the words to “Juicy.” I sang it with the white kid in the fitted hat, the hippie girl with dreads, the kid with a Mohawk, and even the indie girl in a bra and super tight jeans.)

His most recent creation, Rick Ross hustling everyday over Daft Punk's “Digital Love”, would make mothers walk it out. Gillis considers this concoction the highlight of his recent sets. “That one feels like a song that will probably, in some shape or form, show up on the next album,” he said. “It's become a crowd favorite.” He even brought a little bay hyphy to the Midwest, getting us to go stupid like Slider the elephant. Gillis said he enjoys the challenge hyphy presents in sampling, especially with arhythmic rappers like Keak da Sneak. “It's kind of an insane thing to mix up his vocals. They don't usually seem to hit the riff of any song, so maybe I'll mix him up with some Frank Zappa or something like that.”

He finished by inciting a mosh pit, letting the Nirvana “Scentless Apprentice” riff play out from his “Smash Your Head” track. It seemed even after crowd surfing/stripping Gillis wasn't ready for the bar lights to come on. He called out for an after hours place, and though addresses were shouted out, I ignored them. I had a roommate and a girl to find, so I have no clue if the partied continued that night. My concert high ended when I showed up, sweaty, still shirtless to my girl's party, everyone staring at me like I was a methhead in a church.