The Metamorphosis of Indigo De Souza 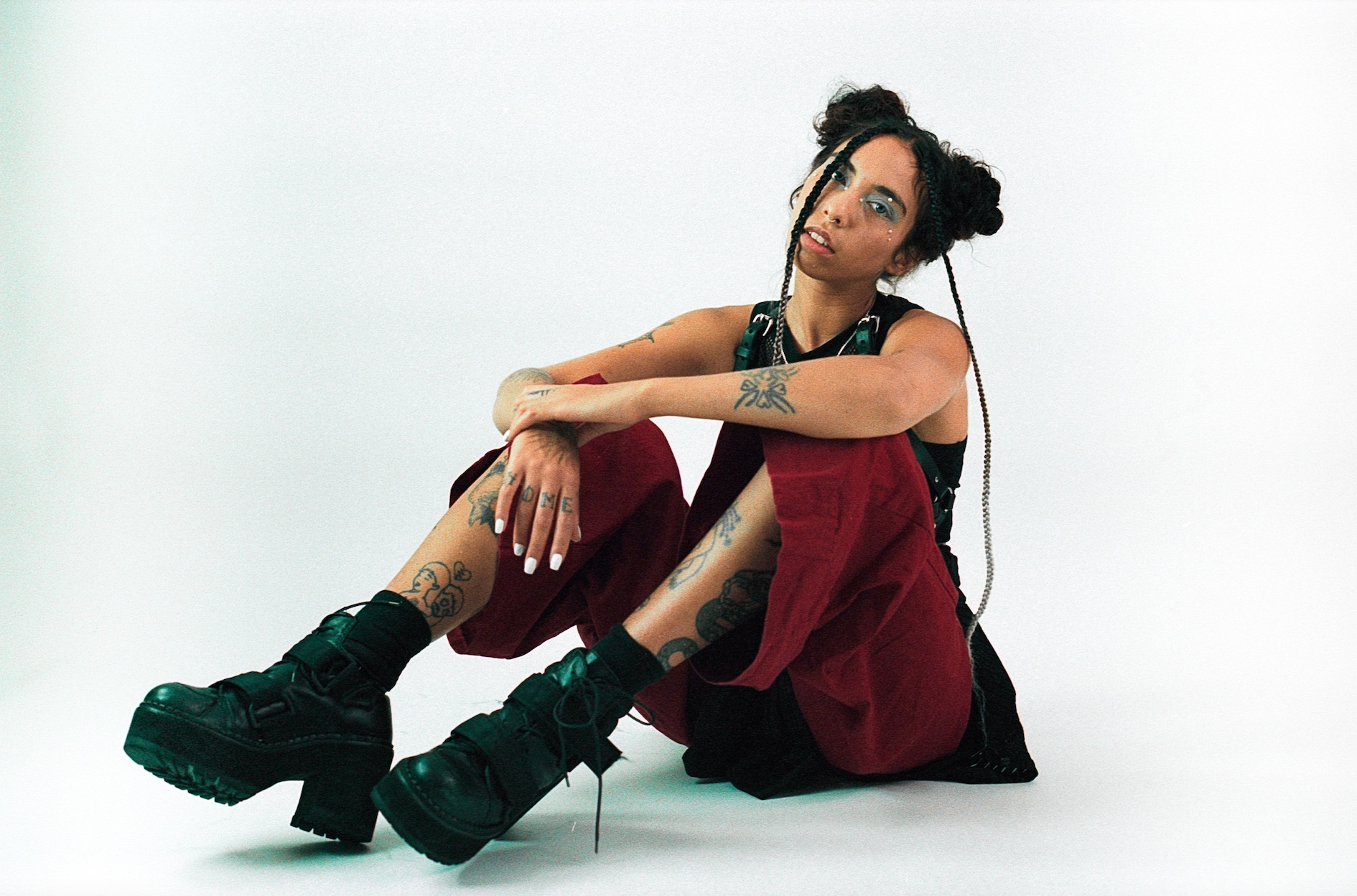 “No matter what shape you take I’ll love you anyways,” Indigo De Souza promises listeners on her upcoming second album Any Shape You Take. Much like Indigo herself, the record gracefully undergoes a metamorphosis bending and shifting through grungy rock ballads to blissful upbeat pop songs. Following her feverishly raw debut LP I Love My Mom, the musician has upped the ante – showing the world that, to no surprise, she can play around with any genre.

Indigo De Souza carries a casualness to the way she lets her emotions fly free and untamed. Early in her performative career, she noticed a collective shift in the room that washed over the audience the first time she sang about personal pain that inspired her to never hold back in her lyrical poetry.

“I’ve never felt weird about being confessional, I think that my whole life I’ve kind of been an oversharer,” De Souza shared. “I’m a human and I’m dying and everybody else is too so it’s special to give people a space to process things.”

Talking about death isn’t uncommon for De Souza. The narrator of the album’s first single “Kill Me” pleads for it fearlessly in a tumultuous release of emotions. “Darker than Death” places mortality akin to a falling relationship, while on “Die/Cry” she screams “I wanna die before you die.”

The pandemic hit and Indigo De Souza was forced to quit touring and sit still with her thoughts. Settling in Asheville, North Carolina, she uncovered a sort of magic finding a community that not only uplifted but also accepted with open arms whoever she wanted to be in any given moment. The record’s second single “Hold U” is a poppy promise to those in her life, playfully painting the picture of the community she surrounded herself with during the pandemic. The video represents the freedom De Souza found in accepting change as a positive part of her life.

“I think my positive ideas of change occurred once I had people in my life that allowed me to change and still loved me through the changes. Whereas I feel like there were times in my life where I was attached to people who would see me change and it would make them feel upset or they would feel attached to old versions that I was shedding and they wouldn’t be supportive of new things I was embodying.”

The singer is rather dexterous in her writing abilities. Listening to her lyrics feels like a glimpse into someone’s late-night thoughts; they’re confessional and invasive, passionate and protruding. The record not only displays her evolution as an individual but also as a musician as she experiments with a new sound. The fourth track on the record, “Pretty Picture,” almost passes as a love song with its upbeat tempo, but hidden within the lyrics tells a tale of a breakup story that is often forgotten; one that ends in love and acceptance that now is simply not their time. “Darker Than Death” highlights De Souza’s power as a vocalist as she perfectly carries her emotions in her voice singing, “And did you feel it too, when we both went blind/ You wouldn’t even look me in the eye”.

On Any Shape You Take, De Souza wants a lot of things. Throughout the lyrics on the album, the word “want” appears 20 plus times, capturing something special hidden throughout the record; these deep desires display her newfound understanding of who and what she wants to become.

“There’s always this sense of wanting to better myself and become a better part of the community and the world, and I just constantly am learning through my trauma experiences and learning how to embody those things in a helpful and light-filled way in the world. It feels like that is what my longing is or why I use that word kind of feels like a longing word.”

Her internal craving to be a better person has pulled her towards making her best music yet.

You can read more of Indigo De Souza’s conversation with Impose below. Any Shape You Take is out August 27 via Saddle Creek (order HERE).

I think there are two sides to the discourse of change, the first around the common “change is good” narrative and the second around the fear to change and the criticism that comes with changing. On this record, you display a whole evolved side of yourself and your music. What was the driving factor in your personal journey of adopting change into your life or when did you start to recognize change as something positive?

I think it wraps back into that sense of community. I found a certain amount of self-love that allowed me to manifest people that were better for me in my life. I too have noticed that people allow me to shift and are very forgiving and celebratory of change even when it’s a hard change or even when through that change I lose them or become more separate from them, there is still a feeling of acceptance. That’s why it is such a theme in this album because I realized that that is ultimate love, just allowing people to be whatever they need to be at any moment even if it doesn’t involve them.

Breaking up with someone you love as you talk about in “Pretty Picture” is arguably the most difficult situation to walk away from. This song is a very upbeat pop tune. Why did you decide to portray your pain with this contrasting positive melody?

It all just came from the idea about these two people are not meant to be together, it’s not their timing right now but they still love each other and because it’s not their timing and because they’re strong enough to see that and to respect that and go their separate ways they are actually doing the thing that is best for both of them. And that’s a very beautiful thing for two people to respect where they’re at and to not try to force something and to still love each other through that change even though they’re not going to belong to each other in a romantic sense. I thought that was something that hadn’t really been expressed before, or that I had heard of in a song, but something that happens a lot and that has happened to me a lot. It’s sad that a lot of breakup songs are usually very spiteful or deeply dark and sad. They’re either spiteful or just purely about loss.

“Kill Me” is the last song on the record, but the first song the world got to hear. What led you to put that song last on the record and first into listeners’ ears?

I remember when we were trying to choose what to put out first, “Kill Me” felt like a special to put out first because I had been playing it live a lot before the pandemic and I just remember a lot of people really relating to it and asking me about it after shows and so I felt like it would be special for those people who had been following me up to that point to hear that song because I know that they were excited to hear it. And it just felt like a cool bridge from the old album [I Love My Mom] to this album because it has a feeling from the new album but also a feeling from the old album. Especially because that song was written write in the center of everything that caused me to write I Love My Mom so it still pulled from that era of my life.

I loved the video component to “Hold U” because at first I had other perceptions about what this song was about but the video introduced me to the fact that the song is about community and friends. How has your community allowed you to become the artist you are today? And what was the experience of filming this video like?

I felt a calling for the video to highlight my community because the vibrance and uplifting nature of my community have truly allowed me to flourish as an individual and to feel like I’m able to express myself without judgment, and just be able to take on anything I need or want to take on because I have the support to do so. I think we all feel that way together and we also just feel very safe to celebrate our bodies and ourselves and celebrate being alive in our bodies and, I don’t know, it is a very special thing.

I think I became a true part of the community during the pandemic because I wasn’t touring anymore and I was suddenly in one place and I became very grounded where I live which is something I had never done before and it felt like a special thing to express with this video because it is a new feeling being very uplifted and held by a community. Once you realize that you can love people without but just for what they are and not for anyway that they react or any kind of extreme emotions they show, but just loving them for who they are at the center of anything, it is just a very freeing feeling. I think the whole community that we have here has realized that and realized that the most magical and powerful thing you can do in this world is to see each other, and love each other and celebrate each other all the time and it is really special. I have never seen anything like it.

How have your roots in North Carolina influenced you as an artist?

I always have a hard time about influence because of course a lot of things around me have influenced me but a lot of when I’m making music just feels like I’m trying to make music that sounds like my brain and I feel most heavily influenced by my brain. Growing up here has been dynamic, there have been pockets of diversity and people who are pushing boundaries and there’s a lot of this kind of judgmental conservative nature in a lot of smaller southern towns – especially the town I grew up in. But there’s also a lot of cool community spaces I found in Asheville. It makes you feel very safe and the climate is amazing. I don’t know if I could ever leave the forests here.

You are going back on tour in a month! What are you most excited to bring to your live show from this album?

Oh my gosh, I don’t know I’m just excited for all of it. I move so fast during songwriting, I’m so excited to play all of these songs, the old I Love My Mom songs still feel fun to play but I also have so many new songs, like brand new songs I’ve written since this album. And during the pandemic I was writing so much. I’m just excited about a lot of things I wanna play. It’ll be a mixture of very old stuff, the new album, and very recently written stuff.