The Social Registry’s two day festival went down under saplings and Christmas lights in The Yard, a site perched on the Gowanus Canal perfectly suited for the part-revivalist, part-unprecedented music the label’s been releasing since 2003.

Jah Division strutted their jammy, flower empowered dub like white boys sucked into a 70s time warp after getting off joyfully on Can, suddenly stuck playing a Kingston dance hall after smoking three hundred pounds of ganja. The space age dub music operated on two distinct tiers. The high register stuff, the vocals and synths, were buried in delay washes and shimmered from on high, while the tireless rhythm section tier, the two-drumset, heavy dub bass attack, generated one of the closer moments of group head-nodding the festival saw through it’s two-day course.

I’ve been a Psychic Ills fan since I first stumbled on one of their earlier 7″ releases at Other Music. Since then I’ve loosely kept track of them through LPs and the loss of a member, and I can say without hesitation that Saturday night was the best I’ve seen them perform. With an extra (new? permanent? hopefully?) keyboardist tacked on, the band officially increased their average hair length to about a foot and a half, while also amplifying the drone in their din into a body-blanket of vibrating noise. There were moments, particularly in the introductory blasts heralding their entrance, when the band, so enveloped in generating synthetic cracks, rips and wheezes (all but the drummer had their own toy to do it with), came off not unlike early Sonic Youth noise-dawdling updated to the digital era.

Growing has been incrementally reconfiguring their sound over the years. They started as relatively straight guitar drone, minimalist, quiet, and pure, distilling music to a near-subliminal hum, but have gradually expanded their palettes since their 2003 Kranky debut with greater dynamics, stronger effects, clearer division of songs and concepts. Still, their interests are primarily textural: decisive rhythm and melody lurk throughout their songs, but mostly in the wings. Live, the trick here seems to be recreating their complex, meticulously processed noises without apparent reliance on pre-arranged loops. To accomplish this on increasingly dense compositions, guitarists Doria and Denardo run their instruments through parallel chains of effects pedals, allowing one theme to be created then tied off, looping while a new part is built up with different pedals. Subsequent pedal manipulations can be used to warp each piece of the sound collage in real time as they go. The resulting long-form pieces are gradual and evolving, both members of the band working off of each other to determine the final course. Song divisions may be unclear without fore-knowledge, but the results, unusually dynamic for drone genre, are intriguing nonetheless.

Sian Alice simmered delicately beneath the chorus-effect of two guitarists doubling a part and a keyboard/violinst, all of whom play sitting down, rocking us close to the precipice of crowd anesthesia. Resident photographer Nate Dorr, for one, peacefully drifted off, as did a few old college friends I ran into later. It wasn’t a bad way to introduce Gang Gang Dance‘s ferocious hour long set.

I’ve been remiss over the years, having passed up countless opportunities to catch Gang Gang Dance, whose Revival of the Shittest and God’s Money are two of the best collections of our decade’s electronic, “eastern”, “post-electronic”, noise making experiments. Their live show was a liberating gallop through material that gained a sheen of something breathing and organic that’s inaccessible on their studio versions. I’d always assumed that most of the synthesized hooks and sinkers were samples, but they’re in fact a brilliant, conversational exchange between heavily-effected guitar and synthesizer. With Lza dancing and playing the frontwoman like a pirate, it was an absurd, exciting end to the two day festival, one that didn’t stop until someone snapped off the PA system (after the band ignored entreaties to obey limits on the festival’s allotted time constraints), and they were forced to take a bow. 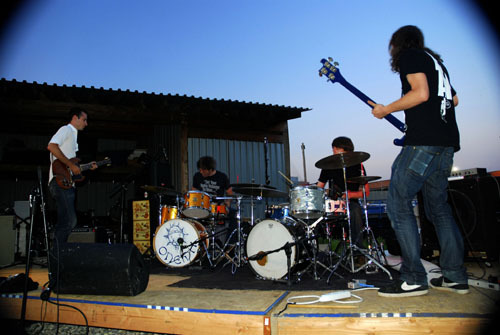 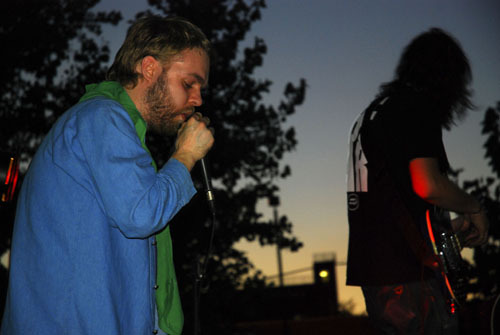 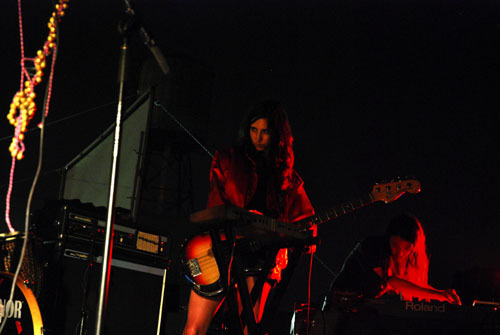 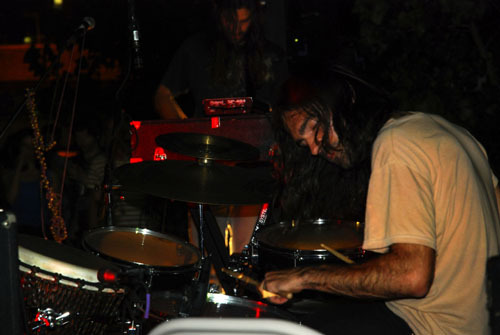 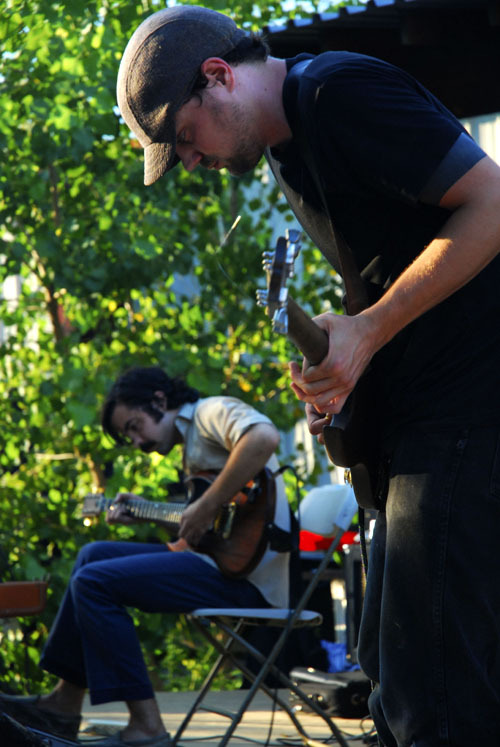 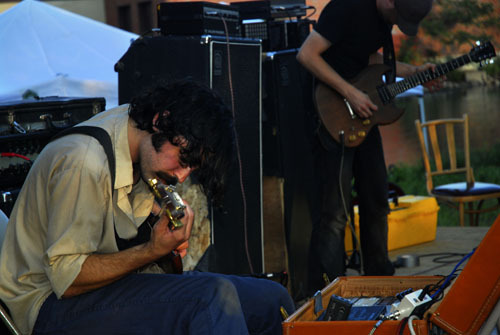 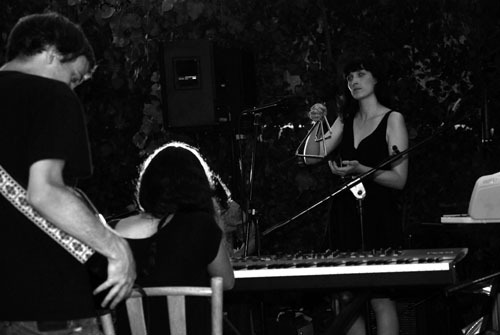 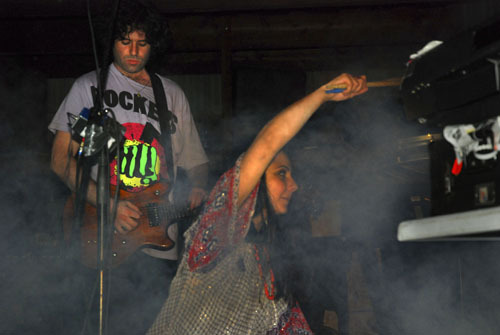 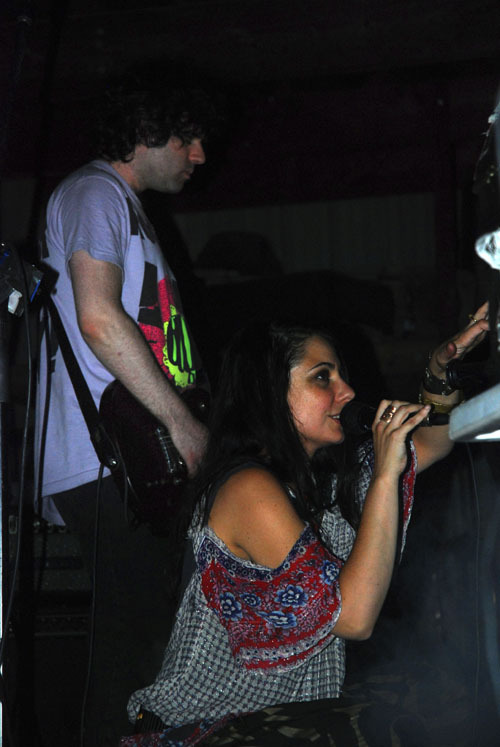 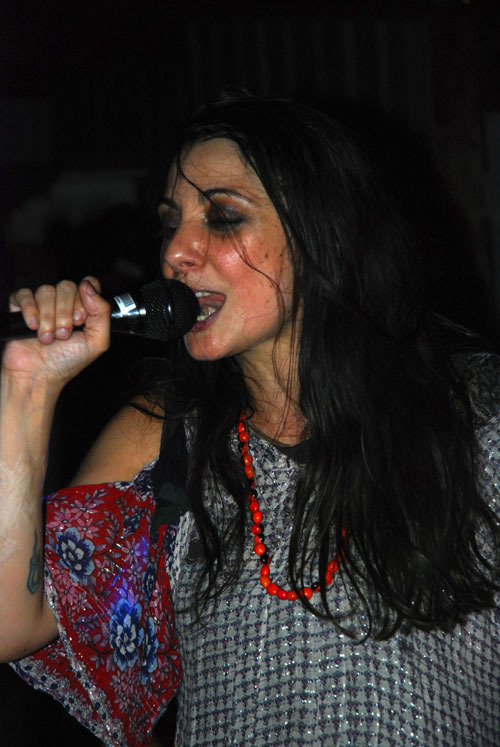 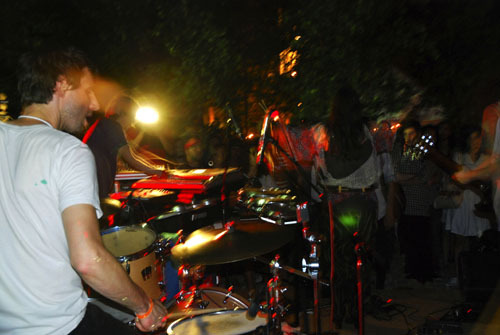 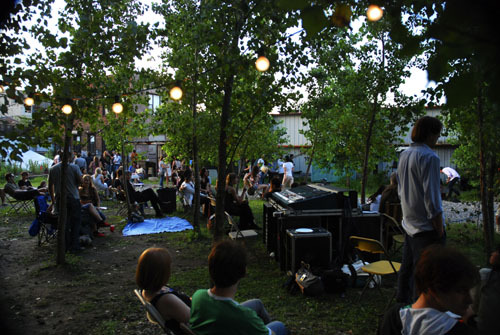