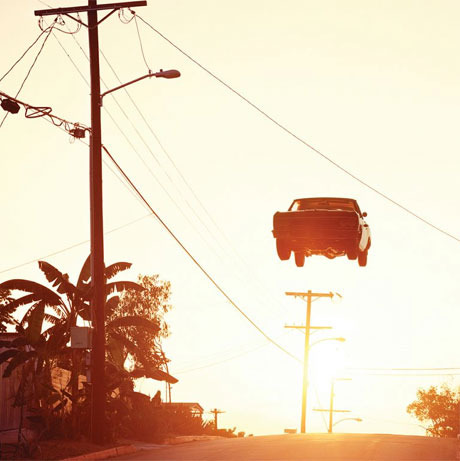 Seattle’s Kinski always prided themselves on being stubbornly out of step with the times. In fact, it might even be said that they were founded on anachronistic principles; the well-worn story of their formation suggests that they met while slamming beers and talking analog recording.

Having arrived with their narcotic drones-meets-monster riffs sound at the close of the ‘90s, they came together just as some of the decade’s scuzziest heroes of art-wrecked rock were either self-destructing (Royal Trux) or mellowing out (Sonic Youth). They also showed up a little to early on the timeline to properly examine their region’s famed sounds from a postmodern perspective. Yet with bands as diverse as Naomi Punk and Milk Music currently launching full-on investigations into the possibilities of slushy Pacific Northwestern punk, Kinski’s latest full-length, Cosy Moments, sounds, at times, incidentally in vogue.

Yet, more often than not, they indulge in the aspects of grunge and early-‘90s indie that are now generally considered regrettable (that is, the cock rock leanings), rather than filter them out the way a younger band might. They aren’t trying to abstract Nirvana’s rhythmic relentlessness — they’re equating it with a pelvic thrust.

Unexpectedly, Cosy Moments is probably the most song-oriented album Kinski has ever made. Chris Martin, whose vocals are more present here than on any previous LP from the band, appears to be zeroing in on and amplifying Thurston Moore’s occasional Neanderthal rocker tendencies. This works best on the seven minute-plus opener, “Long Term Exit Strategy,” a song that recalls the sturdy, gradual hypnotics of Sonic Nurse-era Sonic Youth and Spacemen 3’s extended dirges. As a portrait of scene politics from the perspective of someone who’s all but aged out of his own circle, it’s not exactly “Losing My Edge.” But Martin’s willingness to exploit the creepier aspects of middle-agers clinging onto a scene that’s passing them by is surprisingly effective. By the time he intones “I’ll follow you through the dark night,” we’re not sure if it’s meant as a protective gesture or something more sinister.

This isn’t to say that Martin’s attempts to be a real frontman are wholly successful, though. At worst, his flaccid delivery of cringe inducing lines like “I want to feel you deep inside/But I’m just one of a thousand guys,” have shades of the self-parodying lows of late-career Iggy Pop outings.

Elsewhere, the instrumental “Riff Dad” has a pretty hilarious title that ends up being a bit too spot-on. After threatening to spiral into the manic territory that defined some of the band’s best early work, the song’s drill-press guitars and volatile drumming even out and settle into an unfortunately predictable stomp. The resulting sound veers dangerously close to what might happen if a graying, nondescript bar band interpreted something off of the Kinski/Acid Mothers Temple split from a decade ago.

Yet, while Martin and company can’t quite muster the energy to make the shorter, more up-tempo songs careen into euphoric lunacy, there’s still some magic in the meandering songs. Along with “Long Term Exit Strategy,” late- album comedown “We Think She’s a Nurse” is the highlight of Cosy Moments. A piece of billowing, torch-lit ambient psych, the song doesn’t have much of anything in common with the indie rock that’s currently coming out of Kinski’s corner of the world. But it’s not really surprising that the album’s best moment is blissfully disconnected from contemporary tastes.