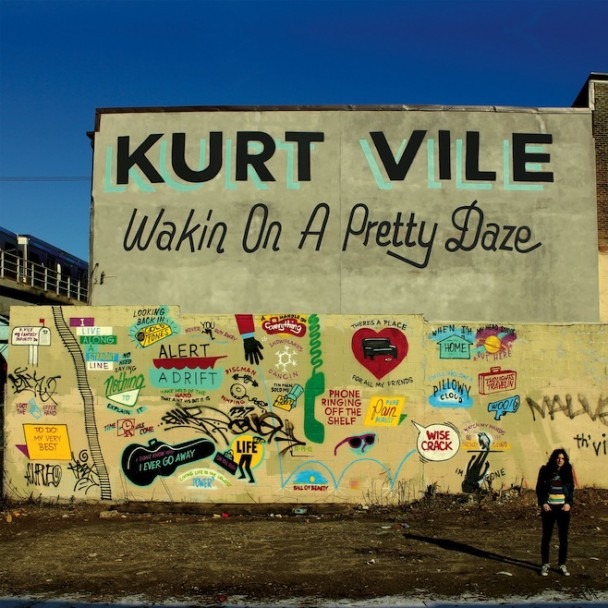 Stickers, babies, an adorable reveal of his true giggling, over-excited nature – all of the extensive promo for Wakin on a Pretty Daze showed that not only has Kurt Vile become comfortable with his rising star in indie-land, he’s also less of a wallflower then he might be painted, or at least he’s tired of the assumptions about his downtrodden state of mind. Vile’s music always sounds like it’s been created in the vacuum of his mind, but by now – with last year’s undeniably successful, if more generally moody, Smoke Ring for My Halo — he knows we’re listening, and that bit of confidence offers the slightest tweak to Wakin.

Kurt’s come a long way from flopping and flipping around like a FISH on a SHIP!, screaming SHIT at the top of his lungs. Behind all that hair, Kurt still has some rough edges, screeching guitars, and the ability to shriek like a sunnavah bitch, but he’s cleaned up and complicated his now-lush sound, making the perfect mellow and letting more of his low-pitched mumble ramble through his releases. Wakin on a Pretty Daze both perfects and breaks that mold as Vile’s voice rises above a murmur for most of the album, and the songs themselves leave behind the rainmaker-hush sound of Smoke Ring in favor of greater clarity and some new tricks. Never arrogant, Kurt Vile’s slightly amped-up directness only makes his music more exciting, and it lends itself to his more sunny worldview on Wakin.

Musing on his past and present in “Was All Talk,” Vile sings, “There was a TIME in my life that is GONE but sometimes I still go back to/Not to be off stalking myself too much/When I’ve got the upper hand/HERE/In present days.” Similarly, in “Goldtone,” Kurt realizes that the moment he’s in right now will be one he’ll look back on in a happy, sepia haze soon. Vile’s always been able to add humor to his swirling self-doubt and quiet-kid observations, but Wakin marks some of the just-plain happiest, self-assured tracks to ever leave Kurt’s lips, sometimes still twisted but sometimes surprisingly straightforward – and unbelievably, it’s just as good as his more down- turned phrases.

His signature style of un-malicious malcontent only floats to the front on the take-it-down a notch “Girl Called Alex,” where Kurt says he “wants to live all the time in my fantasy infinity,” but even here he adds a “them” to the “me” he’s storing away. More deliciously Vile is “Shame Chamber,” a hilarious track that deals with the down-there feelings in Kurt’s way, “feeling bad in the best way a man can” as he whoops like Springsteen on a Nebraska mood-breaking kick.

Growing up with Kurt for the past five or so years can seem like life on a treadmill – if Mr. Vile ever seemed jazzed enough to jump on one. There’s a feeling of forward motion, of consciously focusing on some bigger ideas of self-definition and noting inner thoughts, but everything kind of comes back to zero and the questions remain. Yet after all this time, something is changing in Kurt Vile’s music, however subtly, and the touch of confidence and self-acceptance is infectious – a feeling less like changing and more like owning who you are. At the same time, it’s comforting to realize that, within that owned identity, the kind of inner life of self-doubt Kurt specializes in never really goes away. It’s the sort of thing that makes you realize there’s less to chase and more to enjoy. That’s probably why that goofy long-hair keeps chuckling to himself, and why we all want to be in on the joke.