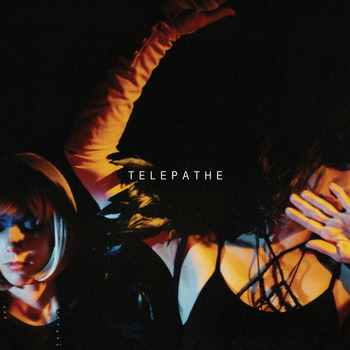 For a while it was unclear what to expect from a Telepathe release, but now their evolution is plain. Dance Mother, their first full-length, retains the percussive claustrophobia of their earliest work, while using almost entirely synthetic textures and dabbling in club-oriented sounds. Opener “So Fine” pretty much lays out the entire conceptual palette in succession, with a shimmering guitar figure rudely interrupted by a two-note electro chug, then an enormous kick/snare combo signaling in Busy Gangnes and Melissa Livaudais’ sublimely multi-tracked “ahs”, and finally, at the 30-second mark, some piercing nightdrive techno synth. It’s quite a statement of intent, but as one of two songs you might be tempted to call a “banger”, along with “Chrome’s On It”, the most obvious representation of their rap fetish, it’s hardly stylistically representative of the rest of the songs.

The album is certainly futurist, but it seems to be a future similar to that as seen by several of Telepathe’s contemporaries, and often begs past comparisons, as well. “Devil’s Trident” is a hyper tone-poem akin to something from Laurie Anderson’s Big Science set to 45rpm, and “In Your Line” sounds like it was cut from TV on the Radio’s Return to Cookie Mountain, complete with Kyp Malone’s backing harmonies (dude gets around). “Lights Go Down” seems similarly shelved from Timbaland’s productions for Bjork’s Volta, while “Michael” could be a remix of a standout from the last Yeah Yeah Yeahs record. The apocalyptic parties conjured by Gang Gang Dance and Yeasayer also creep up here and there, and “Can’t Stand It” rivals the most euphoric, grandiose moments of Lansing-Dreiden or M83.

All that said, the music created here by Gangnes, Livaudais, and, to an unknown extent, producer David Sitek, is uniformly awesome and can hardly be called pastiche, but there would be less of a desire to play spot-the-influence if the girls simply had more distinctive voices. Bizarrely, they put themselves out there more on their earlier releases, but here they sound like they’re back to making timid bedroom recordings. This could be an affectation, but it doesn’t work, and instead projects a front of anonymity on a batch of songs otherwise loaded with character, such that the disconnect between the singing and the lush, epic backing tracks is often hard to bear, more from the pain of lost potential than from any want of listenability. Hopefully the next step in Telepathe’s evolution includes Gangnes and Livaudais, obviously capable singers, making that leap of faith in themselves that being great vocalists requires, and that their music deserves.