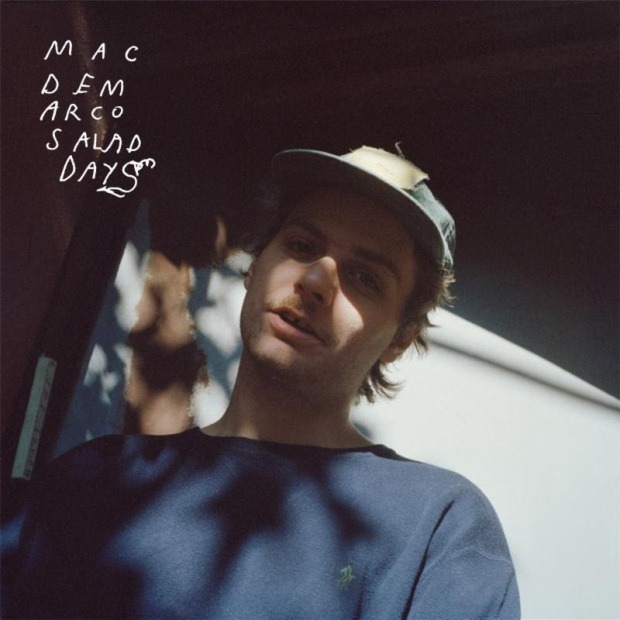 Mac DeMarco isn't sure if he feels comfortable telling you what to do. Living in Bushwick room-share as a 23-year old migrant to New York City makes DeMarco one of thousands of kids who arrive in New York with dreams of acting, writing, doing comedy, or, in his case, playing syrupy slacker-rock that someone might later decide is a generational polemic. It is this last part that makes him uncomfortable: to what degree does Mac DeMarco speak for anyone other than himself, and, what happens when peppy iconoclasm becomes an edifice unto itself? This was certainly not the specific intent when first stuffing his cigarette in the gap between his front teeth as a Canadian teenager, and according to Pitchfork, often putting his bare penis on the faces of his childhood friends. Part of growing up, DeMarco confronts just how much he's comfortable as a role model, maybe even as a placeholder for the hipster id on sophomore Captured Tracks release, Salad Days.

DeMarco's Bushwick antics are a familiar trope at this point, a fact he must recognize on album opener, the eponymous, “Salad Days”. The first lyric courts the anxiety contained in the fulcrum years between alleged adolescence and alleged adulthood, singing, “As I'm getting older, chip upon my upon my shoulder, rolling through life to roll over and die.” This couplet is followed by an insouciant series of woozy “la's” that reveal DeMarco as even unsure how seriously he should take this meditation on aging. Able to laugh at himself, arguably DeMarco's best saving grace, the chorus features conversation with his mother: “Mama, acting like my life's already over/ Oh dear, act your age and try another year.” How many recent college graduates have had a version of this conversation with their parents broadcast live via iPhone from places like Los Feliz, U Street, Logan Square, and Bushwick? Only the young and somewhat bourgeois (a latter classification that DeMarco isn't quite and would hate) are stupid enough to believe in this brand of fatalism, a sureness that youth is gone before it is, a nostalgia for a time that is still unfolding in real time, a certainty you're dying when you're more alive than you've ever been or ever will be again. Only the young mourn what isn't gone. To be 23 in Bushwick, as this writer and so many others once were and are now, living with your Canadian girlfriend in one room in a rat-trap apartment is both the easiest and the hardest thing you've ever done. DeMarco isn't sure whether to be wistful for these “Salad Days” or to call himself a pussy for feeling sorry for himself as he crushes another pizza at Roberta's. This is growing up.

Altering the lyrical voice of the album from the didactic to the pleading, DeMarco struggles to find a unified vision for this period. On “Blue Boy”, he sings, “Worried every time the sun shines/Worried about his hair cut/Calm down, sweetheart, grow up.” This last instruction must be to both himself and others, as his greasy and unkempt hair flies out from under his hat: Calm down, grow up, it's hard to know which is which. He finds a didactic voice again on “Brother”, encouraging the listener to “Take it slow, now brother, let it go” before turning advice columnist, arguably his worst self, on the bubbly and hooky, “Let Her Go”. DeMarco sings, “If your heart just ain't sure/let her know” before unleashing a dreadful metaphor about a flower; the chorus is the title, “Let Her Go”. A few songs later, DeMarco complicates the matter further on the instructive, “Treat Her Better Boy” where he sings the title lyric again as the chorus. In the logical syllogism, it's unclear what to do: “Let Her Go” and “Treat Her Better Boy”—it somehow can't be both. At the end of “Let Her Go” DeMarco scats, “Or you can keep her, it's okay, it's up to you, make your own choice,” a non-lyric, barely audible, a reflection of just how stuck the singer feels in his role as avatar for anyone's fandom, ambitions or pain. He can't be both outsider and soothsayer in his songs, pleading the titular lyric on “Let My Baby Stay”, maybe the first song in indie rock to be addressed directly to Immigration and Naturalization Service about his girlfriend's rapidly expiring visa to remain in the United States. The cultural relativism gets even more dense on “Goodbye Weekend” where DeMarco explains, “Generally speaking I'm fine” in response to the voices of judgement. The song's last lyric, directed at those who would seek to change him, “Just know that you're wasting your time,” maybe DeMarco's version of Charles Barkley's “I am not a role model” Nike ad.

Given that this sound, the breezy, plaintive guitars has all been done before, most notably and recently by Real Estate, is anyone asking DeMarco to be anything other than a musician? He is an artist who is allegedly anxious about playing a sold-out Webster Hall, maybe uncomfortable with how much he feels he can take these people to church. What exactly are people coming to see with Mac DeMarco? Salad Days is no self-help record. It is beautiful, and at times self-assured and self-conscious in the same moments. The arrangements are deceptively simple, often vocal melody riding right down the spine of his guitar lines, but DeMarco is a craftsmen, and maybe a bit of a historian on the “Rocky Racoon” indebted melody for the spacey psych-rock, “Passing Out Pieces”. That song's first lyric casts DeMarco as the uncertain observer in his own experience: “Watching my life passing right in front of my eyes/ Hell of a story, or is it boring?”. The artist isn't sure as he discusses “passing out pieces” of himself and the song's most damning and anxious line, “It's all I've seen that can't be wiped clean/ it's hard to believe what it has made of me.” Epistemologically speaking, getting older might not teach us anything good.

No one is crying for Mac DeMarco, least of all the artist himself. Salad Days may not be his best record—purists hold forth that 2 is superior—but it will be the one that announces his arrival as an important and enduring voice in independent rock. Perhaps this represents the problem of split self, the artist who is afraid of his own bullshit, anxious that he may have nothing but subjective and personal truths to sell, things that should never be used as advice or wisdom; this self-conscious message ends up resonating with listeners anyhow. It is the story of being young and getting a little older, watching your life pass by and wondering how fucked up the world must be if you're becoming in charge of some small part of it. DeMarco is at least sharp enough to point out some of the painful irony of being young. He is an outsider and too young to care about posterity, of that he's somewhat sure. Yet we inherit these pedestals whether we want them or not.