The Velveteens, Sun’s Up 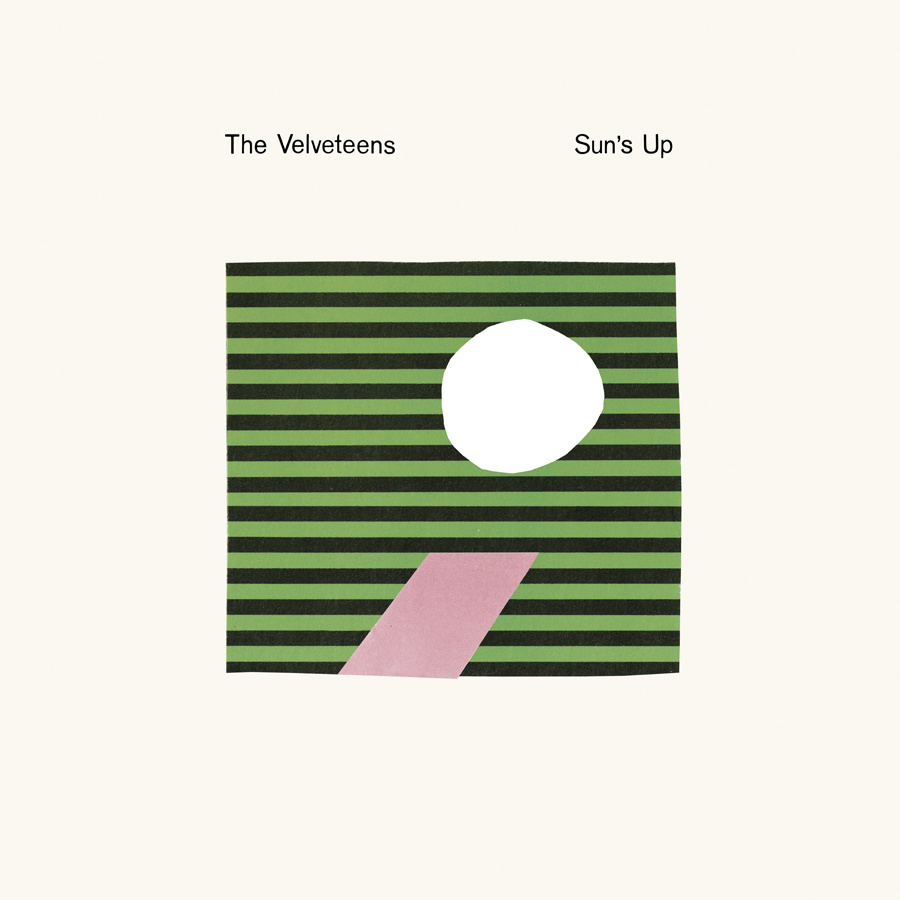 After a handful of home-recorded tapes and basement shows in their hometown of Minneapolis, doo wop-garage pop sweethearts The Velveteens have put out their first studio full-length, produced with Neil Weir of The Old Blackberry Way. The departure from their DIY origins doesn’t entail any outgrowth of sound, however, and Sun’s Up finds them playing on the sparsity that their three-piece arrangement permits. Simultaneously an expansion on their 60s sunshine pop-inspired sound and an exercise in careful minimalism, it evokes a strange tension that lends itself well to exploring sour feelings that often course just beneath the surface.

Initially it feels nice and mellow, with a brightness that’s ingrained in the title of the record, the first track opening steadily with Jillian Schroeder’s thick bassline leading into the jangle of Jonny Holupchinski’s warm, bright, surfy guitar. The vocal drawl from Kiera Coonan, meanwhile, is cool and disaffected, appropriate to a modern-day doo-wop singer and a pleasant contrast to the warmth in the instrumentation. Lines like “Now he’s gone away, ay-ay-ay-ay” possess a jaded kind of nostalgia, while it’s easy to read a snarl into Kiera’s spoken interlude of “I still think of you… when I walk around at night.” The record finds itself playing into the themes of attachment and disillusionment with domesticity that have insinuated themselves in “girl group” music especially, from the Shangri-Las to Bikini Kill—and The Velveteens are drawing from both ends of the spectrum. The title track is resoundingly dark lyrically, with Kiera remarking on leaving a man before he can get started with leaving her: “I heard you didn’t want me anymore / so I tried to go by the wayside.”

The sound has a discontent within it that becomes clearer with time: on “Mama”, Kiera sings, “Mother, help me, please / I’m struggling to make sense of these troubles,” evoking in her soaring voice an intense longing to be comforted that rides above the simple cliché of the words. Throughout the record, there’s a suggestion of total aporia—a constant sense of doubt and tenuousness intimating that at any moment, the friendly facade could drop off completely. Over time the steadiness in instrumentation gives way to jilted rhythms, Kiera’s voice often landing off-kilter with the drums—which are played by her as well, testifying to her strong sense for rhythm. On “Moonlight Floral”, the echo of her protracted croon of those two words somehow feels sinister over the shifting sonic background. Through all this, it’s still strikingly beautiful, with Jonny’s vocals riding the sound in unison of Kiera’s, and Jillian’s wordless harmonies leaking in from behind chorused guitars.

With the same riffs and percussion making their way recurrently into each track, and the vocals echoing themselves, The Velveteens take their time developing their arrangements, lingering around the same progressions. This hardly permits staleness, though; if anything, the repetition transforms lines that would be innocuous into something caustic without having to put anything in overdrive. Kiera intonates the same slurred lines over and over—”Sun’s up, I wave goodbye”—driving in the stake until they’ve transformed and we’re left questioning if she really means what she says, or whether what she says means what we think it means. Whether this is affecting or irritating is a personal call, but its artfulness can’t be denied, and the former feels much more likely. The subtle changes in instrumentation doubly ensure the lingering repetitions don’t go bad: the sunny guitars get swathed in distortion on “Making Signs”, a repeated riff gets colored with layers of other notes over the course of “Tonight”.

Sun’s Up ends soaring, with Kiera’s dynamic voice extending from a low growl and into her high register over a warm, full jangle. Her words are hard to make out, but this doesn’t matter; they meld with the music in a moment of complete clarity, in which all doubt slides away and a brightness washes over. The last thing we hear is a resonant guitar chord that’s just slightly under pitch, as if nodding to an unrest that’s still present, but for now things are settled. We can walk away from our troubles if we want to.