Yes It Will – Rafiq Bhatia 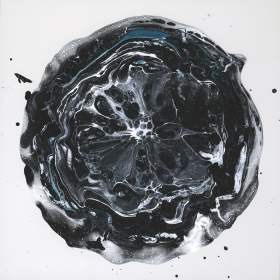 “A Change Is Gonna Come” is one of Sam Cooke’s most ambitious cuts, a widely interpreted civil-rights anthem. It’s also the only cover on Rafiq Bhatia’s new LP, Yes It Will. It seems the album’s title is a response to the statement, the album itself a demonstration or affirmation of just what is different since the original “Change” was written in 1963. Even as Bhatia, the rising jazz-guitar wunderkind, plays it as an instrumental, it’s not hard to discern that if change hasn’t come already, Bhatia’s deconstructionist, anything-goes verve to contemporary jazz is sure to help usher something new in. Having legendary jazz drummer Billy Hart on the track—whose closest touchstone here might be Miles Davis’ On The Corner—certainly doesn’t hurt.

Bhatia is a scrawny 25-year-old with outsized ambition, a music student of both NYU and Oberlin (where Hart spends time). He moved to New York City from North Carolina in 2010, achieving a smattering of acclaim for his virtuosic live shows, displaying chops both thoughtful and lightning fast, the kind of amped-up jags Bill Frisell strikes in busier moments, if not more mechanical. In September, Bhatia released an ambitious EP, Strata, as prep for Yes It Will. Both releases form a strange and yet totally reasonable web between jazz, hip-hop, electronic, and classical, sounding at home next to Jaga Jazzist, Duke Ellington, or Steve Reich—but never totally imitable of any certain sound. It’s accomplished here with Bhatia’s Telecaster and acoustic instruments and just a bit of processing, as he plays live. The core is Alex Ritz on drums, Jeremy Viner on tenor sax, and Jackson Hill on bass—a skilled and locked-in support-staff. Bhatia himself bob-and-weaves through huge, plyometric scales with chiseled ferocity. But he’s also not so full of it as to just sit in the spotlight of his songs—the kid knows when to clam up. His melodies are challenging, his compositions clever. The result here is a knotty, engaging, and sculpted chunk of fusion jazz, and surprisingly accessible at that.

Because of Bhatia’s age, his impressions of pop culture, and the way this record was made, it sounds incredibly now, the kind of music in dialogue with its environment. That plays into identity aspects. Bhatia is a first-generation U.S. national, the descendant of East African Indian parents. He decided early on those he saw in culture industry were not like him, so he would be one to change that. It’s a story echoed by jazz-piano superstar Vijay Iyer. And not just for of race: Iyer is one of Bhatia’s elders and plays on two Yes It Will tracks. Iyer, who has often pointed to scrapping the word jazz for its academic and tonal limitations, fits right in on this release.

His first appearance is on high-energy opener “Background Music.” He keeps things grounded around the lower register, as he often does—even with the frenetic interplay between Ritz and Hill. But the title here has to be a joke. It’s an odd-metered, attention grabber that trades solos around a mesmerizing loop, bringing to mind the sharp opening accent pattern of John Adam’s “Fast Ride In A Short Machine” before diving into a spiraling hook. Bhatia gets the first solo, a staggering opening statement. It’s hard to stay grounded at first; right when you’re a little too floored, the pressure relents. Second track “Open Spaces, Open Minds” immediately cuts the tension by dialing back the tempo and dumping eerie horns and vocals over strolling acoustic guitar harmonics. It recalls Ellington’s standby “In A Sentimental Mood,” if perhaps he were sentimental for the macabre. Iyer appears again on “Annihilator Gators,” the album’s clear standout, opening the track with dark grooves. The head here is exemplifier in avoiding the obvious. And, of all things, it is catchy! Other tracks, like “Try” and the incredible “Endogenous Oscillators” are nauseating in the best way—the synchronized melodies between sax and guitar make for some of the most impressive finger work of the year and are just plain “siiiiiiiick.”

Beyond the compositional chops of this up-and-comer, the most surprising aspect of Yes It Will is the production. It was done largely by Alexander Overington, under the guidance of Valgeir Sigurðsson, the Icelandic mastermind behind Bjork’s Vespertine and Medulla, and more recently Feist’s Metals. He also mixed the release. With such a solid backing cast, the tendency in this mode is simply to record live. Not for Bhatia, who went back in with Overington to create a lush sound bed: the lead sax of “Annihilator Gators” pans to the left to close out a staggering lead, just in time to make way for Ayer’s keys; the haunting sound-collage of “Once,” built around a gorgeous solo by Hart; the double-take panned drums on the album's closer where Hart and Ritz each get a stereo channel. Elsewhere, there’s a swell of strings, an overture of flutes, a glockenspiel in the back of the mix. It’s never overwhelming, and the intention is good, as Bhatia tries bridging the gaps of all the earlier-mentioned, disparate musical threads. But this happens to be among the record’s failings—dead spots sound too dead, the energy of Bhatia’s live show lags.

Despite this, Yes It Will sends the message that whatever Bhatia wants jazz as a method to do, it can. Approaching the medium only in composition, to disrupt it in texture and production, asserts that jazz as we know it has always been about pulling together parts of culture most familiar to its practitioners. While certain players have certainly had more success, there’s never been a right or wrong source to sculpt. As young as he is, Bhatia’s at the forefront: he doesn’t let his influences overwhelm him, but he’s not too shy as to ignore who he is, the tools at his disposal, and the over-saturated culture he has no choice but to steep in.